Time can be a right old cad! One minute you’re casually listening to your Little Earthquakes cassette on the Walkman whilst doing your homework, then the next thing you know: two decades have flown by, as if by the click of a finger. Mind you, Tori Amos doesn’t pause to ponder where the years have gone because she is too busy spending her time being creative. Hot on the heels of last year’s superb return-to-form album, Night of Hunters, she has been fine-tuning her re-scheduled National Theatre musical, The Light Princess, with playwright Sam Adamson, as well as joining forces with the Metropole Orchestra on Gold Dust, a collection of re-recorded songs from her back catalogue. The occasion? Little Earthquakes‘ 20th anniversary.

Although the mile-stone involves her first album, Amos decided to put the spotlight on songs from various stages of her career, with the only albums conspicuously ignored in this regard being To Venus and Back and The Beekeeper (well, there’s nothing from Strange Little Girls, either, but that was a covers record, right?). Here, she tackles Best Fit’s probings about each of the tracks on Gold Dust and, as usual for Amos, she doesn’t shy away from an elaborate answer.

Best Fit: The original ‘Flavor’ on Abnormally Attracted to Sin was very much a sonic sibling for ‘Lust’ from To Venus and Back. Do you feel a connection between the two songs?

Amos: Yes. I do. I think that Abnormally Attracted to Sin had a lot of links with that time period, with the Venus time. So that makes a lot of sense to me.

Best Fit: Was it an obvious choice for Gold Dust from the outset?

Amos: ‘Flavor’ stepped forward for all kinds of reasons. I think that she was overlooked on Abnormally a bit. She took me by the hand and said: “I have a message. The American elections are coming up, there are so many flavors and lifestyles that are being marginalised. And it’s hard to know which way the election is going but what we really need to think about, as an open-minded community, is that people are required to pay taxes but they don’t have the same rights as other people – so, some people can get married but others can’t, yet we’re all expected to contribute to the government? That makes no sense to me. So, word up, ‘Flavor’! I felt that it was important to showcase that and also to talk about the idea of “whose God, then, is God?” , especially with what has happened recently with cultures clashing. Even though America, as a nation, didn’t put out that film, I didn’t put out that film but there are people out there that have an agenda, that want to create terror or anarchy. The idea of “whose God spread fear? / whose God spread love?” – well, many of the Gods, it seems to me, are spreading fear. So, ‘Flavor’ really said to me: “my time is now” and that’s how she was chosen.

Best Fit: Let’s talk about your controversial decision to halve ‘Yes, Anastasia’ [the 1994 Under The Pink version was almost 10 minutes long!] Why oh why?

Amos: Because this is a collaboration! And it’s a little self-indulgent to say “sit there, whilst I do this”. This is a collaboration record, ok? They’re not just backing string-players. It’s Fred Astaire and Ginger Rogers. Jules is really my dance partner, though, because the orchestra is a creature, you know? They’re a dragon and he’s the brain of the dragon and I’m riding the dragon. It seems as if the other approach would be to come in where the Prokofiev energy starts, the Russians coming over the hill. We liked that idea. That was exciting. But you have to make decisions in context. That song ended an album, that was of its time… it exists! But for the orchestra to wait through all of the first part, I felt that would be a little self-indulgent, for this project. For the live version we have another arrangement again because… well, in the studio, without lights and without the visuals, you have to be on the money and on the mark with your cuts and edits.

The albums have to be done for composition’s sake. And then when you play live, because it is live and there aren’t backing singers covering my bum and there’s not an oxygen tank on stage – although, maybe one should be hooked up to me, but that’s another conversation – then you have to design things. It’s different when I’m with the band and I can look over to Matt and he would just know the look of ‘just give me 30 bars’ and we would improvise on the spot. But you don’t jam with an orchestra. So you have to build the improvisations in. And ‘Yes, Anastasia’ has some little extra moments built into it. For quite a few of the songs there will be new live arrangements. ‘Flavor’ has a really wonderful new introduction. I was humming to Philly over the phone and he was giggling his head off but then came back with exactly what I hummed over the phone as the melody for the introduction of ‘Flavor’. On record, if you have a 2 or 3 minute introduction, that doesn’t really work for a focused, precise presentation but performing live is a totally different medium and I treat them differently.

Best Fit: Despite From The Choirgirl Hotel reaching number six in the UK album chart and the single, ‘Spark’, being a top-20 hit, the scheduled release of ‘Jackie’s Strength’ as the follow-up single ended up being cancelled here. What happened?

Amos: I think there was just an administrative change, there were people changing all the time at the record label and that was a very challenging time. It just was. Because the people who really understood the music and who had been there for Little Earthquakes and Under The Pink – like Max Hole – were gone. He’d moved to Universal by then. So I guess when you have people at the record label changing constantly, sometimes decisions would be made out of America for Europe.

Best Fit: Speaking of America, the US also got a full remix CD release for ‘Jackie’s Strength’. Would you ever go down the dance route again?

Amos: I can tell you that, hopefully, as we speak there is a dance remix being done. It’s in the works but I can’t tell you more than that. It’s for this record and it’ll be out by October. That’s the plan, anyway. Because it’s 20 years and because there have been dance remixes, I thought that would need to be represented. 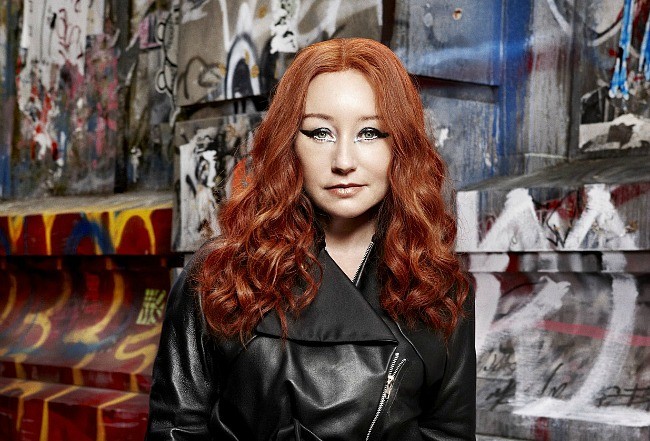 Cloud On My Tongue

Best Fit: What are your memories of writing and recording this song back in 1993?

Amos: I had just come back from Down Under. I had spent some time in that part of the world and I guess it had an influence. I was in New Mexico writing the record and the desert played a big part. The light! This is where Edith Hamilton and Georgia O’Keefe went to paint some of their great works so the light there really did have an effect. And the expansiveness, the sky. It seemed like an endless sky. I wanted to include it on Gold Dust because it is an overlooked piece of music that I have really grown with. I didn’t pick out a lot of groove songs, as you can see, because it wasn’t a band set-up. That wasn’t what the collaboration was. But I felt as if certain songs that were possibly really rhythmic, like ‘God’, ‘Cornflake Girl’, ‘Juarez’, ‘Cruel’… we decided to explore those with the Quartet , instead.

Best Fit: ‘Precious Things’ is one of the finest moments on Gold Dust…

Amos: …well, she stepped forward and really wanted a make-over and was really open to it. It’s been 20 years, she’s secure in who she is and I’ve played her with a band, I’ve played her by myself and then with the Quartet. But it was one of those moments of let’s let her have a big make-over.

Best Fit: It’s one of your biggest and most-loved songs, yet it never ended up as a single. Did you consider releasing it back then?

Amos: The thing is, when people choose singles… I sometimes don’t know why they choose them. I think it’s trying to fit a format, that’s why. The public, however, makes their own decisions, which I think is really exciting and great. Thank god they have their own minds!

Best Fit: The “Guuuuurl” bit in the middle-8 of the song has become a bit iconic in terms of your live performance of it. Fans seem to look forward to your enunciation of it, sort of like the “Handbag” line in Oscar Wilde’s The Importance of Being Earnest…

Amos:  The thing about that with the orchestra… I hope people are going to realise that “Guurl” is going to be different. Because I’m on a count there. And when you’re alone you just come in when you want but when you’re playing it live with other people you have to get it right and you’ve got to be right on the mark. There’s not as much freedom. I’m just focused on hitting that piano line with the orchestra and not falling behind because they don’t stop! . They just keep going!

Best Fit: The lyrics to ‘Gold Dust’ resonate with a sense of hindsight and looking into the future so as to try to avoid regret. Do you have any tried and tested precautions for avoiding regret in life?

Amos: Oh, that’s a very good question. And I don’t know if I have a good answer.

Best Fit: Do you have any regrets that you are prepared to talk about?

Amos: A few. Reacting before thinking things through. You know that saying ‘be smart not right’? I wish that sometimes over the years… even where I have been proven to be right, how I confronted the situation wasn’t right. So yes, you’ve been right but you’ve just left a room in tatters. I think that with confrontation, something that I have learned over the years is to take a step back and try to find out why somebody is in the place that they’re in. I’m sure we have all had that in our lives. The one thing I had to learn that I wish I had known sooner is neutrality. That’s a very powerful place to come from, to be able to be neutral, not to have to respond. Just being able to listen. Not having to have a solution, not having to fix it or defend it, whatever we are talking about – this applies to everything, trust me! Just standing there and not reacting. That’s a powerful place to come from and I’ll tell you, I’m still struggling with it .