Australian musician Johnny Mackay, aka Fascinator, tells Best Fit how he delved deep into his subconscious to design a unique hotel room with his music on a 24 hour loop.

Earlier this year I was asked to design a hotel room at The Carlton Arms in Manhattan. I’m not particularly crafty or handy but based on my music videos they felt I would be a good fit for this crazy 100 yr old “live-in-museum” where even Banksy has a room.

I talked the project over with several friends and eventually settled on a concept: the room would be a physical manifestation of my subconscious and I’d create a 24hr original soundtrack that could be turned up or down by the guest, but never off. Party music at night, breakfast tunes in the morning, several periods of ambient meditation vibes and sleep songs for bedtime.

I pitched the whole thing to The Carlton Arms as “The Fascinator Suite”; as in hotel room and collection of compositions… geddit? They accepted my proposal and as I stepped on to the street it occurred to me that most people don’t release more than a few hours of music in their lifetime and …well…what the hell had I just agreed to?

First thing on the agenda was to work out what my subconscious looked like…or even what part did I want to visualise? Thankfully, as a self-disrespecting, clichéd New Yorker I already had a therapist and we immediately began looking into this. Deciding to plumb the depths for that part of me where ideas come from, she engaged me in something akin to mild hypnosis. 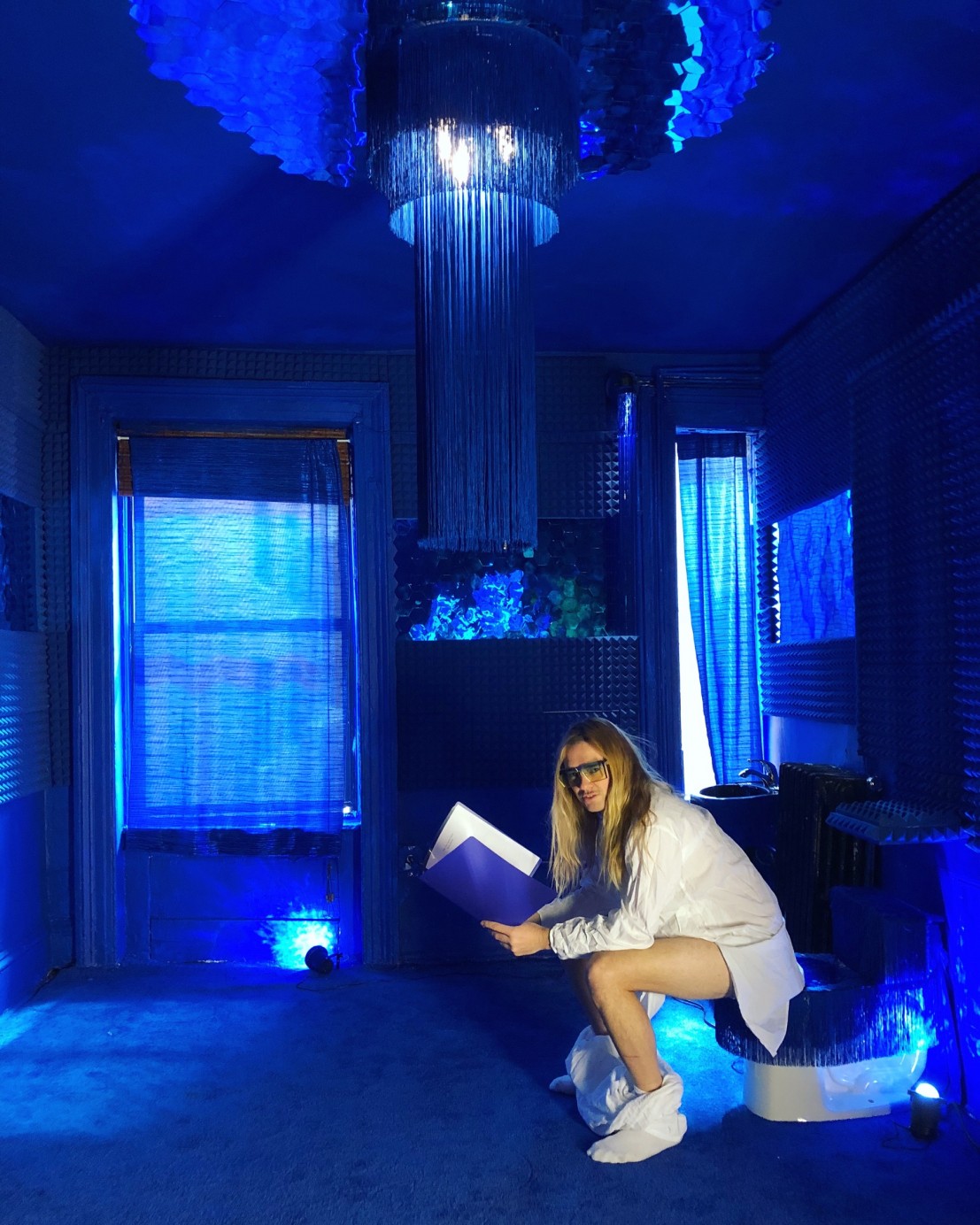 In a trancelike state I’d end up floating on a raft in the ocean, between two lands. Usually representing endings and beginnings, death, moving etc. A void is left with the subconscious rushing to meet reality, communicating in the abstract and desperate for actualisation through expression in the real world.

This kept repeating in the sessions, at first feeling rudderless and helpless but as they continued my vessel grew a sail. I could steer. Then, toward the end, my therapist told me the ship was my ego. It immediately dissolved and I found myself levitating in a blue mist, moving at will.

It was clear this blue, oceany haze was the aesthetic I had to aim for.

Meanwhile I’d moved into The Carlton Arms and my days consisted mostly of composing mammoth volumes of music in room 9b. A scary, dimly lit gothic room with diagrams of human hearts on the walls and an elaborate treasure hunt culminating in the discovery of a secret floor compartment.

Turns out you can rent rooms there for “short stays” and often my frenzied music writing would be interrupted in the afternoon by a commotion at which point I’d turn it down only to hear, “Oh daddy, yes daddy, no daddy” over blasting top 40 from the other end of the hall.

The music I made landed in several categories. My regular Fascinator stuff was in there along with a dance project I’ve tentatively titled "SexJedi". Then there were long, drawn-out ambient works dubbed "Lord Meditator". Here I discovered, after working on a 4 hour piece of sleeping music tuned down to 432hz with layered octaves and fifths of various sounds and instruments up from an A in the theta range, that there was a limit to how large a file can be exported from Ableton. That track ended up being just over 2 hours. 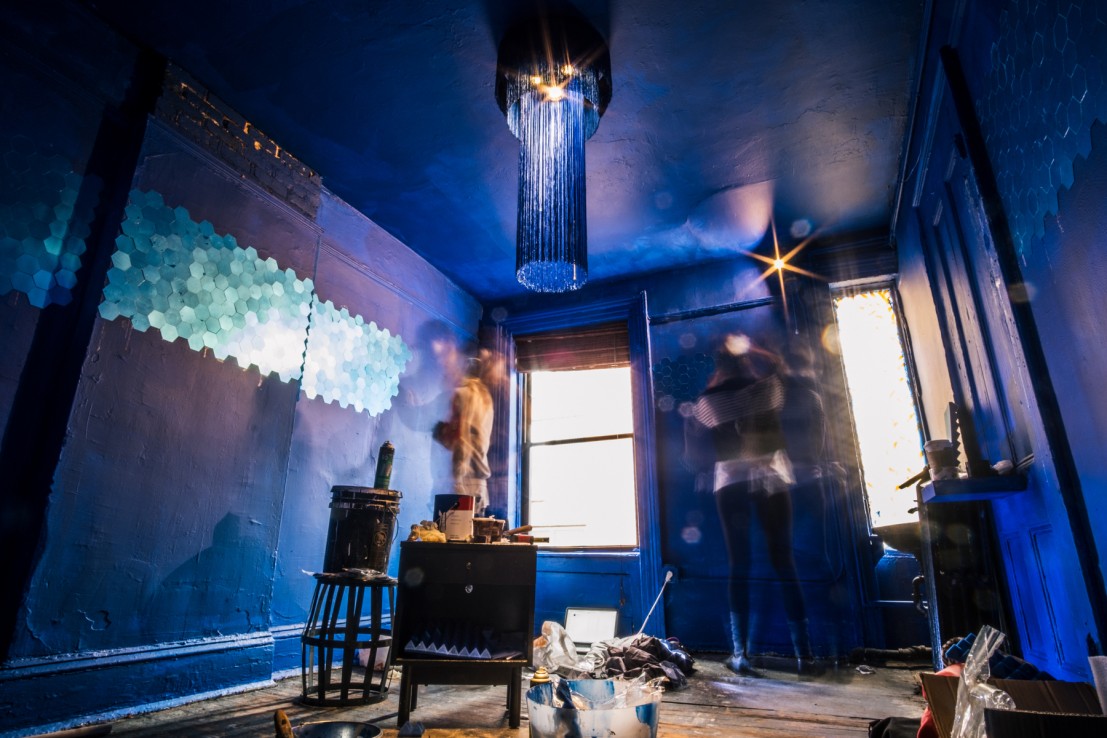 Around this time I’d also started producing a more celebratory, spiritual set of tunes that felt like cosmic "devotionals". I filed them under "Church of Fascintology".

In case you’re wondering what Fascintologists believe I decided I better write some of it down:

There are over 7 billions gods on this planet not counting the animals.

All religion is equal parts divine wisdom and performance art.

God is a question and you are the answer.

Don’t eat anything that flies.

I also came up with a symbol. I figured in a thousand years the writings of L Ron Hubbard and Aleister Crowley will be ancient scripture so I may as well get in on the act.

ANYWAY, after a couple of months scaling the window ledges of sanity at The Carlton Arms I launched the room. A combination of cobalt mirror tiles and dark azure pyramid shaped acoustic foam, crowned in the centre by a beautiful blue-fringed light fitting by my friend Hildie Gifstad (Huldra of Norway). For the music I bought a toilet bowl from Home Depot (new favourite hang) and with a Sonos system in place of the cistern I covered the whole thing in the same blue fringing with a custom cut piece of blue-mirrored plexiglass plugging the bowl that I convinced more than one person to dip their hand into at the opening.

I’ve not been back to The Carlton Arms since they started renting the room out to the public. I often wonder if there’s been any expressive short stays going on in there. Or how many guests have inadvertently been saved by Fascintology from a night of sleeping through the devotionals. I’ve actually heard my musical toilet may have been removed due to lodgers not being able to work out how to turn me down. That’s ok I guess. Hosting a group of people inside your subconscious isn’t something I’d recommend long term, but it’s definitely a good night out …or in.