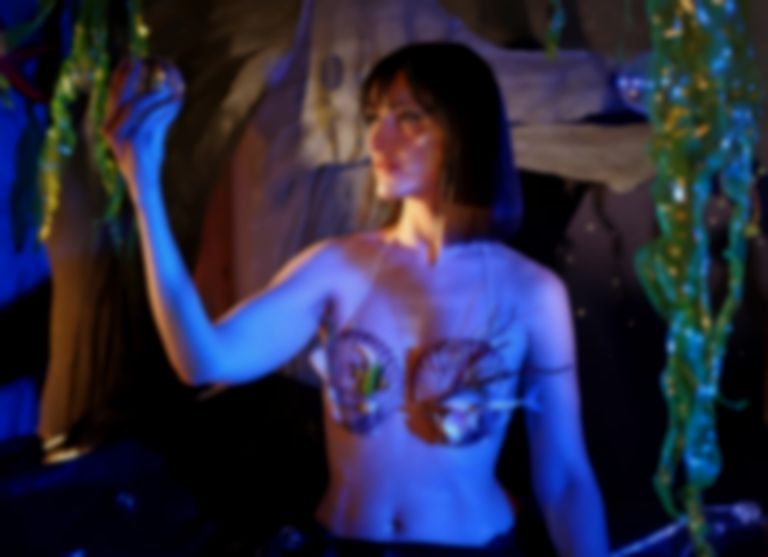 There’s something in the waters in France’s music scene of late. From Heavenly Recordings' recent signing Halo Maud to upcoming Oui Love performers La Féline, Best Fit speaks to the musicians challenging pop perceptions on "otherness" in art, bilingual songwriting and how some things will always be lost in translation.

“If you’re a female singer, you’d better look like or sing like Barbara or Véronique Sanson. As a man, let’s hope you’re a performer like Jacques Brel or a joker like Boby Lapointe”, insists Agnès Gayraud, brainchild of cold-wave troupe, La Féline (lead photo). It’s fair to say when it comes to greatest hits, France likes to stay faithful to its cherished chansons. According to the SNEP*, France’s best selling record of all time remains French-language studio album, D’Eux by Canadian crooner, Celine Dion. But while France might be reluctant to progressive pop thinking, the UK has welcomed it with open borders.

In recent years, we’ve lauded the international success of fellow French, indie-pop artists like electronic outfit M83 and unassuming rockers, Phoenix. But artists like Gayraud offer hope for a new dawn of French pop stars and something arguably more exciting than the gauzy soft rock of four lads from Versailles. There is a wave of women disrupting the scene across the Channel. You’ll have seen it in rising French-Cuban sister duo, Ibeyi and trailblazing chart-toppers like Héloïse Letissier, more commonly known as Christine and the Queens. Well, Heavenly’s latest signing, Halo Maud shares some of Letissier’s success formula, not only producing similarly blissful, synth pop but in Grammy-nominated producer, Maxime Le Guil.

“We still have this weird reaction in France sometimes to be a little bit afraid of what is new and different, and we also always want to explain or justify things."

The Paris based singer-songwriter has recently completed a mammoth string of dates across the UK and Europe in support of debut EP, Du Pouvoir. The tracks are a product of solo experiments, alongside two tracks with recording engineer, Le Guil, who has worked with a force of French females in the studio, from maverick singer Camille, to lo-fi-songstress-come-actress, Soko. Currently navigating the snowy mountains between Strasbourg and Lausanne, Halo Maud’s creative force Maud Nadal, shares similar reservations to Gayraud when it comes to France’s reluctance to new sounds: “We still have this weird reaction in France sometimes to be a little bit afraid of what is new and different, and we also always want to explain or justify things. This, and of course money concerns, explain why we keep on hearing the same thing on the radio. Unfortunately often plain and formatted productions”.

Despite the French charts feeling stagnant and sluggish, the IFPI’s** Global Music Report shared that, in 2016, the US, France, and the UK were the three largest markets generating revenue through recorded music production. And it’s digital that is, unsurprisingly, leading that seismic shift accounting for 55% of recorded music revenue in France. Indeed, French streaming service Deezer racks up twice as many subscribers as Spotify in its home country.

But digital is also helping to harness artists by its very nature. Take French singer and actress, Soko and her lo-fi VHS video recordings who also enlisted Le Guil on production duties for her second studio album, My Dreams Dictate My Reality. “Soko is a child of the generation of listening to a super compressed YouTube version of a song, over and over again”, explains Le Guil. “If I were to say, ‘Nice demo. Let’s re-do it from scratch with my 10,000 euro mics, we’d probably miss the point…”, he adds on the recording process of today’s bedroom beatmakers.

Production is an element that binds this new French sound and it’s not just through Le Guil. There’s a playful freedom through being able to express yourself in two languages that’s important to capture in the studio. Le Guil has experienced this first hand: “With the French language, you have to work harder as a producer to make it cut through the track, and that’s why the vocal is often mixed in too loud, in a way that does not ‘blend’ as much with the instrumental, because the priority is to get the storytelling understood”. Saint Laurent approved pop troupe Juniore’s founder and frontwoman, Anna Jean, knows all about this too. The band's self-titled 2016 compilation of the early years came out on West-Coast label, Burger Records, whilst production duties remained faithfully with French producer, Samy Osta (La Femme, Feu Chatterton). “He understands my ‘bi-continental’, not to say schizoid, personality”, Jean explains. “It's really something that we have in common, having loved English music growing up, and later, realising all the wonderful music we had missed in France from the same era. It was good to work with a French producer - to combine all the music I love most”. The band's debut album, Ouh là là, comes out on Le Phonographe, a label that Jean also founded with Osta.

But staying authentic to your roots hasn’t always been cool. Storytelling in their mother tongue has often hampered French-speaking artists to a wider international market. (Alright, Céline, not you!) But there are benefits of being a bilingual songwriter as La Féline’s Gayraud reflects: “When you start to write in your own tongue, you get more accurate and also more intense with what you mean: it’s far more difficult, because you’re suddenly harder to please. You know perfectly well when it’s a cliché. But when you manage to write lyrics you are happy with, in the end, you really reach a new stage in your ability to express yourself. Call it authenticity, or just conviction”.

“I was once told by a Dutch girl that she loved our music not despite the lyrics she couldn't understand, but because she could ‘feel the feelings’. I thought that was a great compliment”.

And it’s this conviction and energy that has captured a new audience of digitally connected music aficionados. Or, in Nadal’s case, merry Scots finding they can relate to her English refrains: “It has been really surprising to see that people could make their own interpretation of the lyrics but misunderstandings do sometimes happen. Like in Glasgow last week, where a lady came to tell me after the show: ‘I really liked the song where you say, What happened last night (where I actually sing “what happened after”) I don't remember. That's the perfect song for Glasgow!’”Juniore’s Jean has received similar post-show praise: “I was once told by a Dutch girl that she loved our music not despite the lyrics she couldn't understand, but because she could ‘feel the feelings’. I thought that was a great compliment”.

Maybe that’s the thing about French pop. It manages to harness a feeling without the need for a literal translation. Much like someone interpreting something more abstract and defining themselves through it. Whether that’s a Glaswegian struggling to recall the night before or a Dutch girl meditating in an idyll of dreamscape vibes. It’s a kind of otherness that La Féline’s Gayraud recognises in her own work: “The recent enthusiastic reception by the English Press of my album Triomphe, fully written in French, surprised me in a way. In a very good way. As if pop amateurs became eager now for this kind of otherness. In a way, we are always looking for otherness when we relate to art”.

“If you're not making the kind of music aired on the national radio stations, with the support of the media, normalised pop music, there's really not much exposure possible. It’s not because French people don't like different kinds of music, they just don't even know it's happening”

It’s interesting to think of not only the art as otherly but the artists themselves. For a country that prides itself on liberté and égalité, France can sometimes feel a little claustrophobic. “If you're not making the kind of music aired on the national radio stations, with the support of the media, normalised pop music, there's really not much exposure possible. It’s not because French people don't like different kinds of music, they just don't even know it's happening”, Juniore’s Jean remarks.

Indie initiatives like La Souterraine are helping to change that. Founded by Benjamin Caschera and Laurent Bajon, they have amplified the sound of “the others” releasing compilations of underground francophones songs. For Nadal, that’s an intrinsic part to challenging fundamental pop perceptions: “They complete a mission that labels themselves and the media have forgotten to handle. An adventurous and educational one”. And there is real hope in that: “Ears are easily trained. It’s almost as if they were here to help us stay open-minded”.

While French pop fans might still be revelling in the chart hits of the 80s, us Brits are all ears.

Halo Maud’s Je Suis Une île is out 25 May via Heavenly Recordings.

Catch La Féline and Juniore at Oui Love Club on April 4th at Birthdays, Dalston, in partnership with Rockfeedback and The Line of Best Fit. Get tickets and RSVP on Facebook.