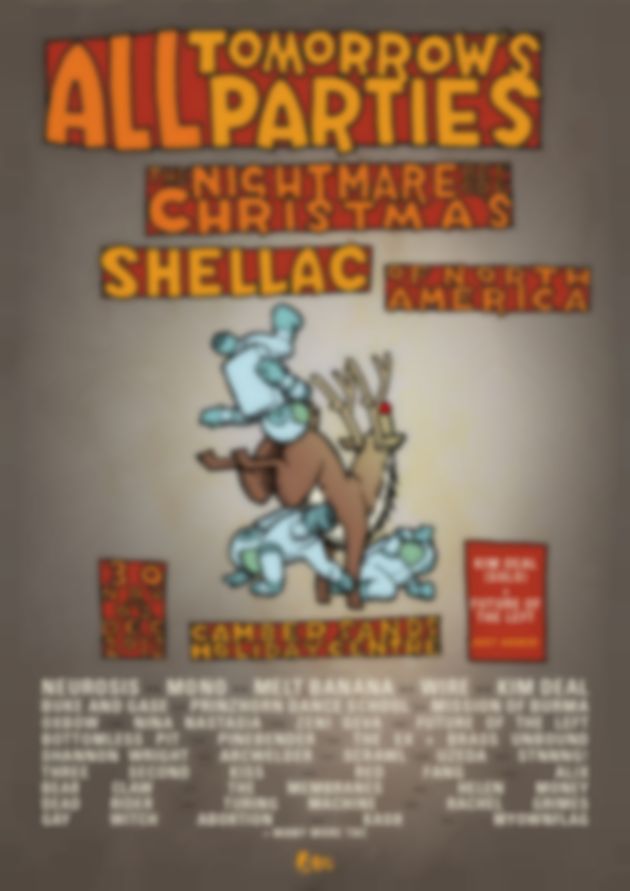 Returning to Camber Sands was always going to be an interesting proposition for the ever expanding, sometimes stumbling, always musically compelling ATP brand.

The relative luxury of the Butlin’s Minehead site would have to be cast from the minds of the fans with as heavy a dose of experimental racket as was humanly possible. In this sense, and in several others we’ll get to in a moment, ATP’s Nightmare Before Christmas, curated by Our Glorious Leader Steve Albini and his (equally glorious)buddies Bob and Todd of Shellac, was an outstanding success of which we bring you but a few highlights.

Almost entirely unknown in the UK, Minneapolis’ STNNNG took early Friday evening by the neck, held it’s squirming body against the wall then screamed into it’s eyes until it begged for more. If you don’t fancy Bill Hicks fronting The Jesus Lizard then please see a psychiatrist. If you do? Get involved. STNNNG are a band that have a short fuse and are primed to explode with their fourth album due early next year. From the tracks debuted here it’s hard to think of a band of this type with this magnitude of potential since At The Drive-In. Yes – they’re that good. It’s obligatory to go from blinkered ignorance to blind worship in the space of a single hour at ATP – this time around this was the band for the job.

2. Future of the Left

Having recently been at some small risk of being perceived as ‘stalwarts’ of the UK alt-rock scene, Andy Falkous’ post-McLusky band is now three albums in and after a few line-up shifts they’ve hit their full stride. Jesus Christ is that stride magnificent. On an otherwise relatively subdued Sunday afternoon FOTL erupt with force, fury, humour and above all else outstanding tunes. Their show-stealing stage deconstruction at the set’s close is a cheeky and joyous rampage – just like the band’s most recent release The Fight Against Common Sense. The double-tap treat of McLusky’s ‘To Hell With Good Intentions’ and ‘Lightsabre Cocksucking Blues’ didn’t detract from the fun either.

No-one wants to come away from an ATP without being swept up in some epic post-rock. This service was provided more than ably by the ever-exhilarating Mono in the headline slot on Friday night. Drawing largely from their most recent and least abrasive album For My Parents the squall of sound that lifted the audience to the next level was nonetheless overwhelming. It seems to be an appropriate response to just stand there with tears rolling down your cheeks as the Japanese legends hit yet another arcing crescendo – it’s hard to disagree.

Workmanlike, often North American, serious, and indebted to Shellac in several ways are the black t-shirt bands that took over the stages this year. From the terrific Pinebender through to the storming Arcwelder via the impossibly tuneful and powerful Bottmless Pit it all just goes to show how bands with little concern for image or ephemera can create some of the most emotive and connected musical moments you could hope for. This isn’t to say they lack showmanship either – the ultimate black t shirt band Shellac themselves proved that conclusively in their festival closing set on Sunday night that was ticklingly playful as well as being immensely well-received.

5. Nina Nastasia’s ‘That Is All There Is’

During a shambolic and entirely endearing set on Sunday Nastasia engaged the crowd with tales of eaten twinkies and disgusting pharmaceutical devices. Aside from that she also played some astounding songs including this, the very definition of disappointment, crushed dreams, romantic disappointment and, finally, stoicism. It’s the kind of song that chills you then wraps you in a blanket and lets you know you’ll be ok. See also – Kim Deal playing ‘Gigantic’ during her solo set. THAT was a bit special.**

Now limiting the highlights list to five doesn’t allow for a celebration of the full-throated might of Uzeda, the punishing, delicious loudness of Neurosis or the proto Riot Grrrl beauty-pop of Scrawl. Suffice to say that musically it was one of the best ATPs in recent memory.

Nor does it allow us the opposing luxury to observe that the dreadful facilities – bars without drinks, vending machines without snacks, toilets without locks, two keys between 6 people, beds without duvets, chalets without showers, one solitary vegetarian option, – proved testing for many BUT if you were to take the logical path and just fill your time with generally excellent bands handpicked from all over the world for your listening pleasure and bright morning beach walks you’d have been hard pressed to find much to complain about when it came down to it.

*They don’t ALL wear black t-shirts. It just feels like they do.

** And as for the atmosphere? Fairly faultless – smiling faces on the faces of both attendees and organisers and band members reached Cheshire cat levels throughout.