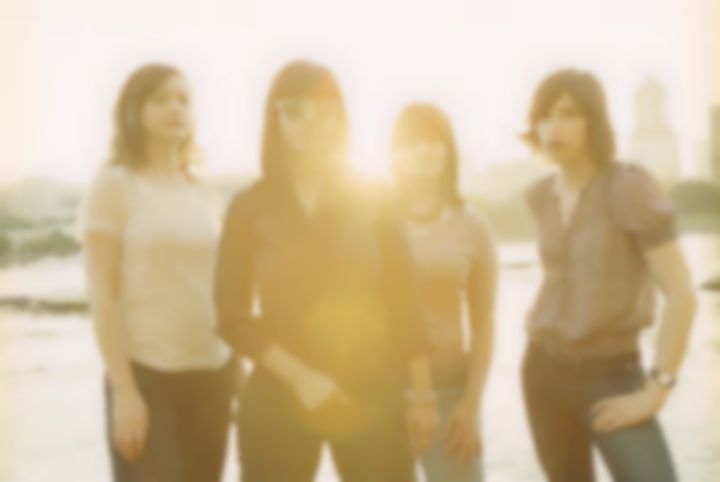 It’s around 6pm on a crisp February evening when I walk into an as yet closed Electric Ballroom in Camden. The first show I ever saw here was Reel Big Fish back as an impressionable 15 year old, the last was Thurston Moore: Two facts I will relay to Janet Weiss during our brief conversation. She will be more impressed with one than the other.

I arrive as Wild Flag finish their sound check. The venue looks smaller when empty from the hundreds of eager punters who will later fill it’s wooden floor and applaud as the four women currently leaving the stage tear the room apart. I follow drummer Janet Weiss to a small room up two flights of stairs. In other parts of the Ballroom Carrie, Mary, and Rebecca all play host to other journalists’ questions – the band in demand off the strength of last year’s storming debut.

But of course it’s also difficult not to hold them in the glow of their former and ongoing affiliations. Between the four you can count Sleater-Kinney, Quasi, Stephen Malkmus & The Jicks, Helium, The Spells, Autoclave, The Minders… The Wikipedia entries continue, but tonight they are Wild Flag and that’s what we’ll be talking about, for the most part.

I ask how is the tour going. “It’s good, it’s good” she replies with a hint of reassurance. “Each city is different. I mean, there’s been a lot of people at the shows which is nice; I’ve been on tours where there’s not so many people at the shows.”

Last year’s self-titled debut seemed to creep up from nowhere, until suddenly I found it a continuous companion in my headphones, its brilliance noted in many an end of year list. I ask Janet if she’s seen a change in the people coming to Wild Flag shows off the back of the extra press. Has it given them a lift? “Yeah, I don’t know – it’s really hard to tell” she pauses. “I’m sure it doesn’t hurt and maybe it would drive people to go to the show if they were on the fence about it, if they saw it somewhere. I mean that’s why we do press really, to try and get people to come out, come to the show, or listen to the music. I hope that helps. It’s nice to be acknowledged.”

It seems as though a lot of musicians as they get older either continue their band, split and reform later, or become a solo artist. Not many finish and then start a whole new band from scratch. I tentatively ask Janet, why now? “Yeah, I dunno – it seemed like a good idea” she laughs, thankfully receiving the question warmly. “I mean I’m not quite ready to pack it in just yet. I think the idea of starting something new sounded exciting after being in Sleater-Kinney for ten years and my band Quasi for eighteen years, and The Jicks for four years. I hadn’t been in a new band in a lifetime so it was sort of exciting, sort of scary, and a little bit intimidating, but exciting to think of something starting fresh – something where you could actually surprise people with what you were doing and they wouldn’t know what to expect.”

“We definitely didn’t make a demo and make everybody listen to it, and play big shows. Like, we started really small and tried to develop our chemistry and develop our personality just to make sure that was all gelling right.”

I assert that although the band does stand in its own right, it’s difficult to find anything written about them (including this here article) that doesn’t reference Sleater-Kinney. I ask Janet if she ever feels we should just judge it by itself? Does she ever get annoyed?  “I get a little bit annoyed in the interviews sometimes when they’ll make a comparison between Sleater-Kinney and Wild Flag. Sleater-Kinney had Corin Tucker; it’s so different. This band has Mary Timony and Rebecca Cole, and Carrie and I of course are similar but I feel like if there’s true expression happening with the music, the music is going to naturally be different because Mary is expressing herself, Rebecca is expressing herself, Carrie… and the way we react together is much different.”

“So, instead of talking about what we are, I have to talk about how we compare to somebody else, but I don’t mind it. I just feel like there’s better ways to talk about the music; about what it is and what we hope for.”

I completely agree. I always thought with Sleater-Kinney it was the two competing figures; the two different vocal lines and two guitar parts and that Janet was the backbone, like the Steve Shelley of the group, an assimilation that causes a roar of laughter from her previously reserved figure. Wild Flag feels like a cohesive band all working in the same song whereas in Sleater-Kinney it kinda felt like two songs put together…

“Yeah, I always felt like Carrie was playing the upper part of the neck and Corin was playing the lower part and they were like two parts of the same person in a way and you combine them and you get this virtuoso thing. It was very unique I thought, the way the songs were structured and the way they worked together. But this is also a sort of tension between the two singers, but it’s more like I think the guitar playing is creating the tension and how it pushes and pulls and they’re both such incredible guitar players it’s just amazing to watch.”

“I remember when we first started practicing we talked about serving the song. There’s four of us so more people than we’re used to playing with, so there might be a time when it doesn’t need bass, it doesn’t need keyboards, it doesn’t need two guitars. You’ll see at the show, there are often times when Carrie’s just singing and not playing and Mary’s playing guitar and we have a new song where Carrie plays the guitar and Mary just plays a solo and then doesn’t play anything else. So, it freed us up I think, to do less in a way, and then know when the time is right to do more.”

The thing with Wild Flag is it seems like they get on well together and write well together, which is why I found it surprising that the album was written while some were in Portland and some in Washington DC. “Yeah, Mary lives in Washington DC” Janet confirms. “I mean, we practice in Portland and Mary sometimes will work on things and make demos at home, and then she brings them in and we hash them out, change them around, and add our parts to them. I think there was only one song that was written the three of us together and Mary coming in after, but mostly all of them were written all of us together.”

It definitely has urgency to it.

“Yeah, I mean, that was the idea. That’s the joy of a first album. Once you make an album, or two albums, then you have to redefine yourself and every album becomes a challenge to say something different, but when you’re doing your first album; it’s all different! It’s all original and new, and you’re just trying to figure out who you are. You have to focus, like, ‘let’s let this be direct, let’s not let this be an overdub heavy record’… I mean, we all love working that way too, the more elaborate sort of setting, but we didn’t get a string section and maybe for our third or fourth record, I’m sure we’ll want to do those things at some point. But this is more like four people, playing together, simplicity, and our flare coming from a live feel.”

The album was released in the UK through Wichita and in the US via Merge. I ask Janet about their choice in labels, both seem to have quite a family feel to them? “Yeah, you can go out to dinner with the label and have a really great time and you respect them” she replies with a smile.

“I’m friends with The Cribs so of course I had met the Wichita folks through them and it seemed really natural. My other band, Quasi, have been on Domino since 1997. Domino are very close to my heart; I love Domino, I love Laurence so it’s kind of like these were the two last labels I’d not been on! Merge was definitely number one choice, and we’ve known them for so long, and Mac and Laura are just great, and being on a label run by people who are in a band is excellent – they really know how to handle things that a business person wouldn’t.”

“If a mistake gets made, they just say ‘Oh man, we’re so sorry.’ They just come right out like, uh oh, whoops, we’ll fix that now. Things are taken care of, there’s no cover up. They’re really honest with what the expectations are. They don’t spend more than they can afford; it’s really great. And Mark over here is so big hearted and so excited about the music and that’s what you want because it’s not that often that you make money for these labels. We try, but it’s difficult.”

It’s a strange time to want to be starting your career again and forming a band!

“The nice thing is, I feel like with the computer age, I feel like new things are given more attention than old things. Old things are sort of just, heard it already. I’m in a band that’s been around for eighteen years. You feel it when you go on tour and no one’s there. You feel like you’re doing this really good work but then people have seen you already, and people don’t have money to go to every gig, so they pick this new band they’ve never seen.”

“Like Sonic Youth breaking up, I felt maybe they just can’t get anybody’s attention anymore because they put out a record and although it’s great… We played with them in Brooklyn last summer and it was incredible and gorgeous seeing the river and seeing Manhattan off in the distance and just walking in and they’re sound checking. I mean, even still after playing with them many times I still, I can’t get over it. It’s Thurston Moore! Oh man, that is one person I will always be star-struck around! He’s like a GOD, y’know? I mean, I’m not a religious person but Thurston Moore is a God.”

“It’s hard to be normal around him, it is difficult. They’re your heroes.”

I have to stop myself from admitting that that’s kind of how I’m feeling now.