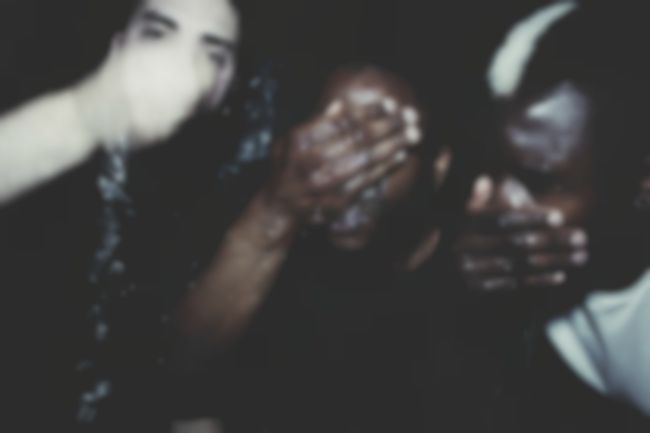 It was 11 July 2010 and I was stood in a soaked field somewhere between Glasgow and Edinburgh working on the BBC Introducing Stage at T in the Park. We’d been supporting Young Fathers on BBC Introducing for quite some time, and out they came – boundless energy, neon beats, and an instant charm that could ignite even the dampest of crowds. And then they just seemed to disappear.

I assumed they’d gone to the place in the sky reserved for the luminous, skinny jeaned stars of 2007, but really the Glaswegians, Ally, Kayus, and Graham, were locked away in a recording space in their home city relentlessly writing in hiding.

“We’ve done two albums,” Ally begins, speaking of the mystery material that will never see the light of day. “We’ve been recording stuff, just constantly recording, two albums worth of material. By the time our stuff was ready to go we were on to the next level, so it’s just like, why let that represent you?”

What finally made the cut for Young Fathers was, understandably after two years and a two record progression, something startlingly different indeed. 2012’s Tape One was a catatonic call of skewed samples, slick R’n’B croons, and uncomfortably lo-fi production, all wrapped up in a despairing depth. And live, gone were the choreographed dance moves and smiles and in was an unnervingly bleak intensity.

“You put in five years, four or five years, and then everything comes together,” continues Ally. “Also, I think the stuff we’ve done before; the albums, if you’d heard them you would have seen a gradual progression and change so it wouldn’t have seemed so dramatic and drastic.”

Kayus, still a sugar rush of beaming personality off-stage picks up, “when you’re younger you’re still trying to find your place and still not comfortable with yourself and timid and whatever, and as you grow up you feel more comfortable with who you are and I think that now we feel grown up. We know what our sound is and we know what we’re doing.”

Describing the new sound as coming from, “a mix of frustration and wanting to take charge of the music,” Ally details the process that forced them to complete and release Tape One. “We just went in the studio for a week and recorded every single day and said to us, make sure you have a rough mix by the end of every session, so I think with that intensity, that’s how that came about – because we were constantly thinking about ideas and songs and just in that zone and so we did an album’s worth of material in just over a week and then we picked the songs, just like that.”

Releasing Tape One online last year as a free download, it was picked up by Anthony Fantano of The Needle Drop who posted a glowing review, which lead to US label Anticon reaching out to the three Scottish lads. Kayus confesses, “I didn’t know much about the label, until we were signed to the label.”

A UK tour supporting Anticon’s co-founder Yoni Wolf’s Why? followed late last year and at the start of 2013 Tape One had its official release on physical formats to the delight of Ally. “It feels more real. Somehow it improves the sound or the quality of the song. It’s a weird thing, it’s just The Emperor’s New Clothes but it makes it bigger. Seems like yeah, this is real.”

But even with a first release under their belts, Young Fathers aren’t giving up their tried and trusted work ethic having already completed Tape Two and with a new album on the way, information that may terrify their independent label, as Ally imparts, “We gave them all the videos and Tape One and Tape Two, and rarely does that happen that a band gives them so much stuff that they’re like, fucking hell. We need to try and stagger stuff.”

What happens when an unstoppable force meets a record label? Welcome to the world of Young Fathers.

Tape One is available now through Anticon.