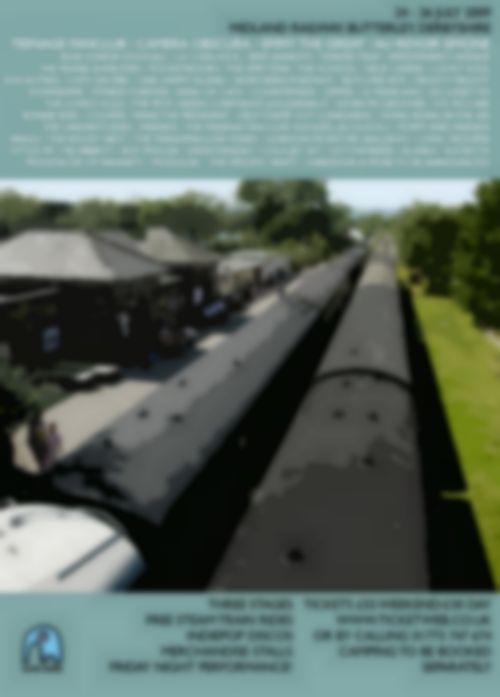 With market saturation and the recession it’s getting far more difficult to make a new festival work these days without major backing. One such venture that has found a successful niche is Indietracks, which has the unique selling point of combining indiepop with heritage trains. Based at the Midland Railway Centre in Derbyshire, with stages on an actual steam train and in a rebuilt Victorian church, it’s also quickly garnered a reputation that draws in a friendly clintele and top bands in their specific, chiefly young DIY field – the Wedding Present and Los Campesinos! headlined last year.

This year’s third event is the biggest yet, partly due to a link-up with Elefant Records, the highly regarded Barcelona based label celebrating its twentieth anniversary in 2009 by curating the main stage. They’re bringing headliners Teenage Fanclub, Camera Obscura and Au Revoir Simone; also on the bill are the likes of Emmy The Great, the Frank And Walters, Ballboy’s Gordon McIntyre, Wake The President, BMX Bandits, Lucky Soul, Cats On Fire, MJ Hibbett, Rose Elinor Dougall, The School and The Manhattan Love Suicides. As a preview of one of the festival season’s most unique propositions, TLOBF asked some questions of festival organiser Stuart Mackay.

How did Indietracks come into being? Why the location?
I restore old trains for a living, and I’d been on a contract at the Midland Railway for quite a while when I started to get interested in indiepop. I was travelling a lot to gigs and shows, and thought why not have them come here for a change? So I set up a little show with three bands and DJs and it was a tremendous success, I’d not envisaged the way everyone would take to the old trains.

What were your ambitions for the festival, and how has reality compared?
I never started out having ambitions about a festival, it was just something that happened. For the second show I thought we’d have to make it more worthwhile for the people that had travelled so far, so I started planning an all-dayer, but then thought, we’re setting this place up for one day, we may as well leave it set up for another day. But if there were any ambitions about what I was doing it was just to see happy smiling faces, people enjoying themselves, and that’s been achieved.

How much of a challenge is it to turn the Railway Centre into a festival-ready location?
It’s not too bad, as unlike many festivals that set up in empty fields we’re based on an existing tourist site with facilities. The first year there was a mad rush to finish the building work on the loco shed where the main stage was, the concrete floor has barely set by the time we started building a stage in there! And as the festival grows each year we’re gradually expanding with it, and the staff there are getting used to what we were trying to do.

How do you approach artist booking?
Headliners are always tough to get, there’s a limited amount that we could get away within the indiepop remit, and that number is reduced further as we’re so small we don’t have the funding booking agents expect when they hear the words ‘festival’. As for the rest, I prioritise initially on any foreign bands that have asked, as I feel I might not always be able to have them back. I get inundated with requests to play and I do listen to them all, and it’s probably the hardest part trying to pick from them for the remaining slots. There’s so many great indiepop bands out there I hate not having them all play.

How did the Elefant link-up come about?
It was simply from a suggestion on the Anorak forum, I approached them and they liked the idea. Being their anniversary helped, it was the ideal time. And I like how they’re bringing loads of bands that I wouldn’t have normally considered.

Do you buy into the talk at the moment of a Pains Of Being Pure At Heart-spearheaded full-on C86 revival?
I’m so glad that they’re doing really well! I hope that the music press look beyond them into the rest of the scene and give it more exposure.

Who are you most looking forward to this year?
I rarely get a chance to see any acts! Although I’ll probably be “unavailable” when Pocketbooks, The Smittens and One Happy Island are on, and a big list of others if I can manage. But I wouldn’t book any of the acts unless I was excited about seeing them all.

Who would you recommend among the lesser known artists?
Again, they’re all there for a reason! I’ve probably listened to Kevin McGrother‘s album the most. But not all have albums!

Having been involved with San Francisco Popfest, is there a transatlantic difference in perception?
American indiepop tends to be more rockier, less twee. I’m getting used to it!

Who would you most like to play that hasn’t already or can’t due to being defunct?
There may be a band or two that have split up I would do anything for to get them to play. Bands seem to get back together, so fingers crossed!

Do you have any other favourite British festivals?
I don’t go to any. I’ve went to Leeds, V and T in the Park once years ago, but don’t make a point of going. I’m probably too old now…

Indietracks Indiepop Festival takes place on 24th to 26th July at the Swanwick junction of the Midland Railway Centre, Butterley, Derbyshire. For tickets and further information, visit the Indietracks website.