A shining jewel in Nigeria's alté scene, Tems' emotive R&B reflects her belief in the importance of facing your struggles.

“If you thought I was disturbed before / Baby boy I'm gon' disturb you now”: this is the visceral opening line on Tems’ song “Interference”, but it could also describe her approach to her heartfelt brand of alt R&B. The Nigerian star – real name Temilade Openiyi – decided a few years ago that she wanted to be in control of her future and her music, regardless of what anyone else thought. It’s certainly paid off: she’s one of the most idiosyncratic performers to emerge from her home country in recent years.

Tems grew up in the sprawling and chaotic Lagos, one of Africa’s finest cultural centres. She was raised there by her single mother alongside her older brother, who was a big influence on her grounding in music. “My brother had a computer and he had iTunes so that’s where I used to find all sorts of music,” Tems remembers.

Through this she listened to rap and hip-hop from outside Nigeria, particularly coming to adore Aaliyah, Lauryn Hill, and Lil Wayne. When the time came to make music herself, she would play the guitar and jam with her brother, performing mini concerts in his room. Her singing voice now is a thing of power and force, command and confidence – bearing similarities to the way that Tracy Chapman could break a listener – yet after initially receiving some lessons from her music teacher aged 11, she had no formal training. “After my music teacher left, I was practicing on my own and finding my own sound,” she says. “Most of my knowledge of music is self-taught.” 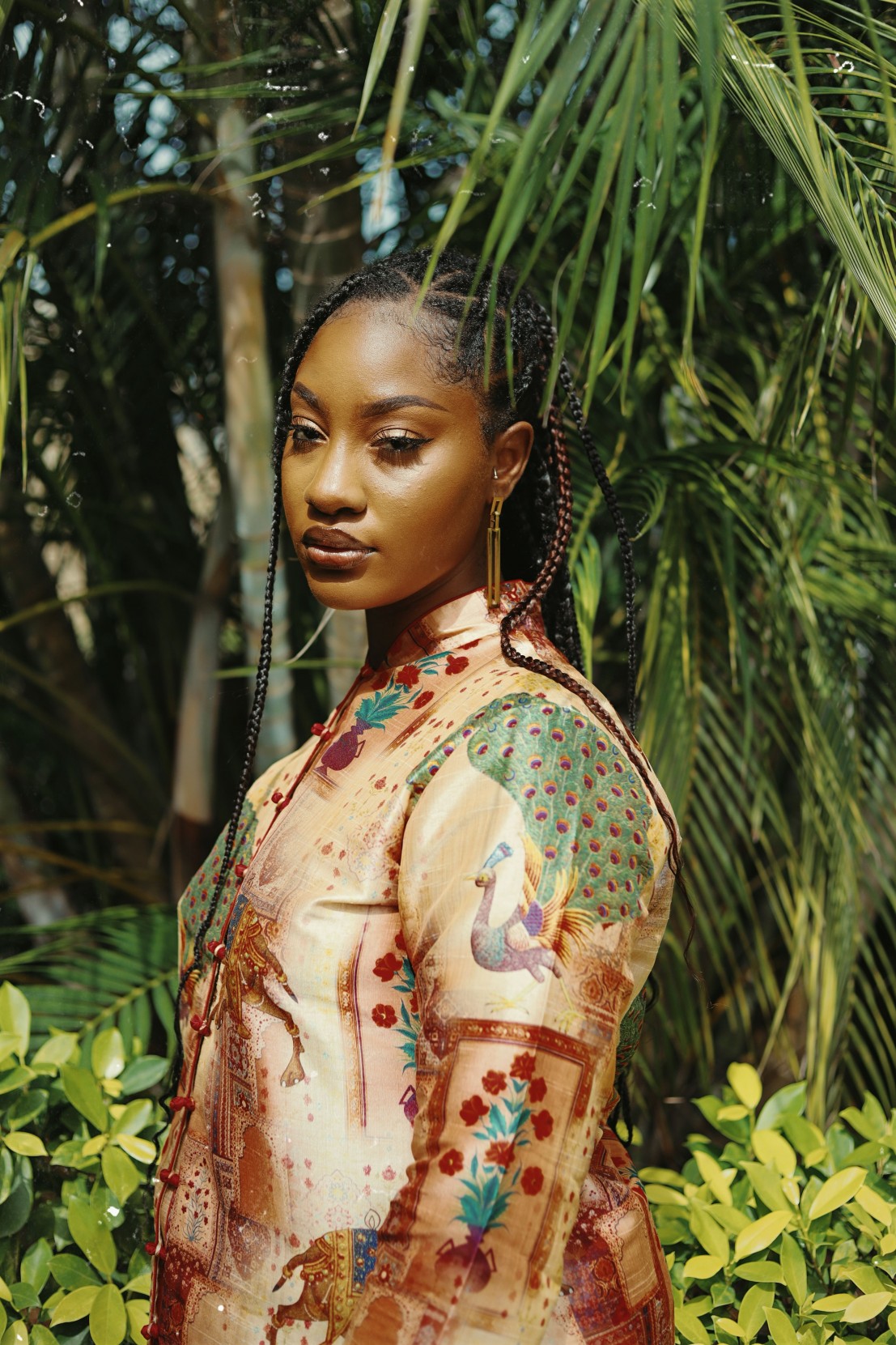 There were obstacles in her way to a career in music. Although she was disinclined to the idea, her family ensured that she made it to university, enrolling her in a course in South Africa. After her degree, she returned to Nigeria and found herself working an unchallenging office job as a digital marketer for an oil services company. After just six months, Tems knew that she wasn’t on the right path. “I wasn’t happy and I knew that music was all I wanted to do,” she says. One New Year’s Eve, she received a sign that change was coming: “I got a message on my devotional that said ‘Take a leap’, and I was just like ‘I’m quitting my job today’. So I quit it immediately.”

It meant abandoning the pre-ordained path expected of someone who goes to university in Nigeria: find a proper job, get married, and have children. “That’s not life. What kind of life is that?” Tems says firmly. “I was at a crossroads, to do what I really want to do or do what people were telling me to do either because they’re scared or have insecurities that they’re pushing onto me. I decided I don’t care what people think.” So she left behind her safe but staid existence to fully pursue music in 2018.

The speed of her rise in the resulting three years has been almost unfathomable: her first song “Mr Rebel” was followed by the massive “Try Me”, which earned over 12 million streaming plays and led to stellar guest spots with Khalid (“Know Your Worth”) and Wizkid (“Essence”). Soon after, she was chosen as one of Apple’s Rising Artists in Africa and became a key face of Nigeria's alté scene.

Still just 25, Tems has been hailed as a trailblazer for her success as a woman at the top of Nigerian music and an innovator for her bold stylistic and sonic choices. It was a career in music on a far smaller scale that Tems originally envisioned though. “I just thought I would end up getting a gig singing somewhere on Friday nights,” she laughs. “I feel blessed and incredibly grateful. My life has totally changed. It’s just crazy.”

Tems capitalised on the rapid ascension, releasing her debut EP in September, For Broken Ears. The title was a mission statement for her. “In Nigeria, most of the music that most of the people are attuned to is music that is just to help them forget their struggle and their lives. I want to heal rather than pretend that struggle isn’t there. That’s why I called it For Broken Ears, it’s for people that are broken and need to hear something that will heal their hearts and their minds.”

It was followed by her latest single, “The Key”. It’s about overcoming the toxic judgement of other people, or “about coming out of the darkness”, as Tems says. In the video for the song, Tems stands surrounded by fire and intimidating darkened figures before she welcomes magical powers bestowed upon her. “It’s us in this dark world that has so much bloodshed and so many tears, so much death,” she explains. “it’s about finding a light in that dark world and spreading a light when you find it to everybody else. In the end, the world that was covered in blood starts to heal and goes back to normal. The message is by letting your light shine you can live beyond the world and share that with others.”

“Try Me” comes from a similar place. “I think in Nigeria there’s a lot of hardship and struggle and I think struggle is something everyone can relate with. “Try Me” is about breaking out of the struggle. Every time you try to get up, someone’s always trying to bring you down. I think that’s why people connected to it because everyone is going through that in some way or the other. Everybody has haters, people that are trying to sabotage them and what they’ve worked for. Everybody has that story.” This is why her dedicated fanbase call themselves the ‘Rebel Gang’: “it’s about breaking free from any societal pressure, any chain,” Tems says. “It’s about not being afraid to be yourself and just living your life regardless of what people say. I try to encourage my fans to be themselves and to kill it.” 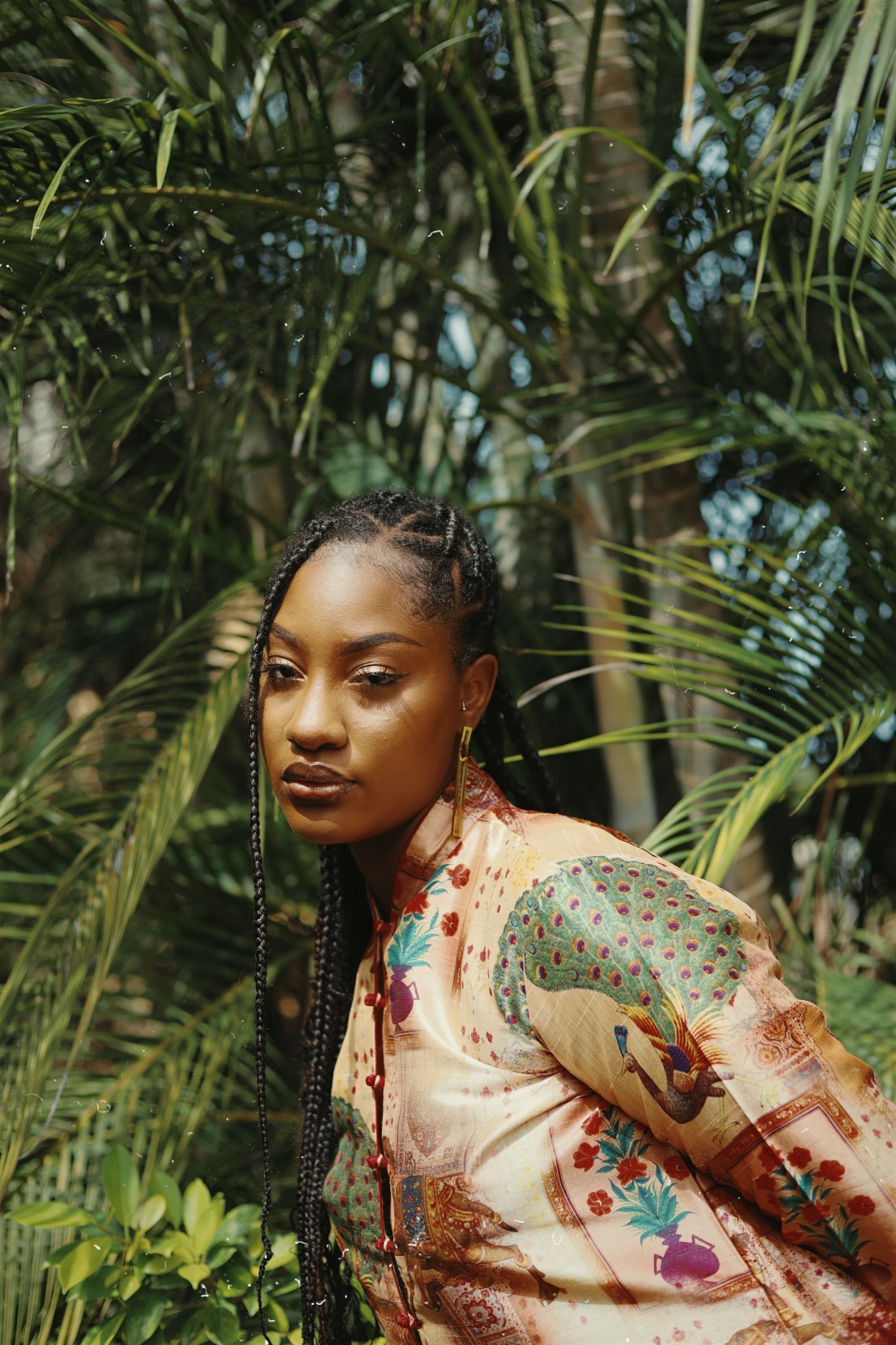 Tems is a triple threat – a singer, songwriter and producer. She took to production when she initially couldn’t find a good fit for her ambition and vision. “I couldn’t find anybody that understood my music,” she remembers. “Everyone was trying to do afrobeats at the time and I was exposed to much more than afrobeats. I just decided to produce myself since nobody understood me!” And her sound has helped her to forge a distinctive path in her home country. A potent mixture of alternative R&B and contemporary afrobeats, it’s the overarching atmosphere that especially distinguishes Tems: her mellow and melancholic touches are a contrast to the energy and upbeat of traditionally popular afrobeats. Where those songs favour lighter subjects like falling in love and partying, Tems is unfazed at being serious and introspective.

When I proffer that music today is increasingly becoming post-genre, it’s a landscape that Tems readily agrees suits her. “I didn’t know about genres when I started writing music,” she notes. “When I was much younger and writing songs, I didn’t know that music was called different things, that every song had different categories. I was just making music and then I found out the music I was making was R&B! I think the purpose should be just to create music. It doesn’t need a label.”

When Tems speaks of her herself or her life, she is slightly reserved. But when I ask about the connection between her spirituality and her music, she comes alive. “You feel spirituality but you just don’t recognise what it is,” she ponders. “It’s when you feel things deeply when you’re overrun by emotions, when something touches you, something you feel so deeply and you can’t explain what it is. A lot of time, you’ve experienced things spiritually but you just didn’t recognise it and misdiagnosed it.”

“Music is spiritual. It’s coming from my spirit and people connect with it because they have that same spirit within them. You can listen to something and it’ll make you cry. Why are you crying exactly? What is that thing that is making you cry? If you really look deep into it, you would see that you’ve been experiencing things spiritually already.” 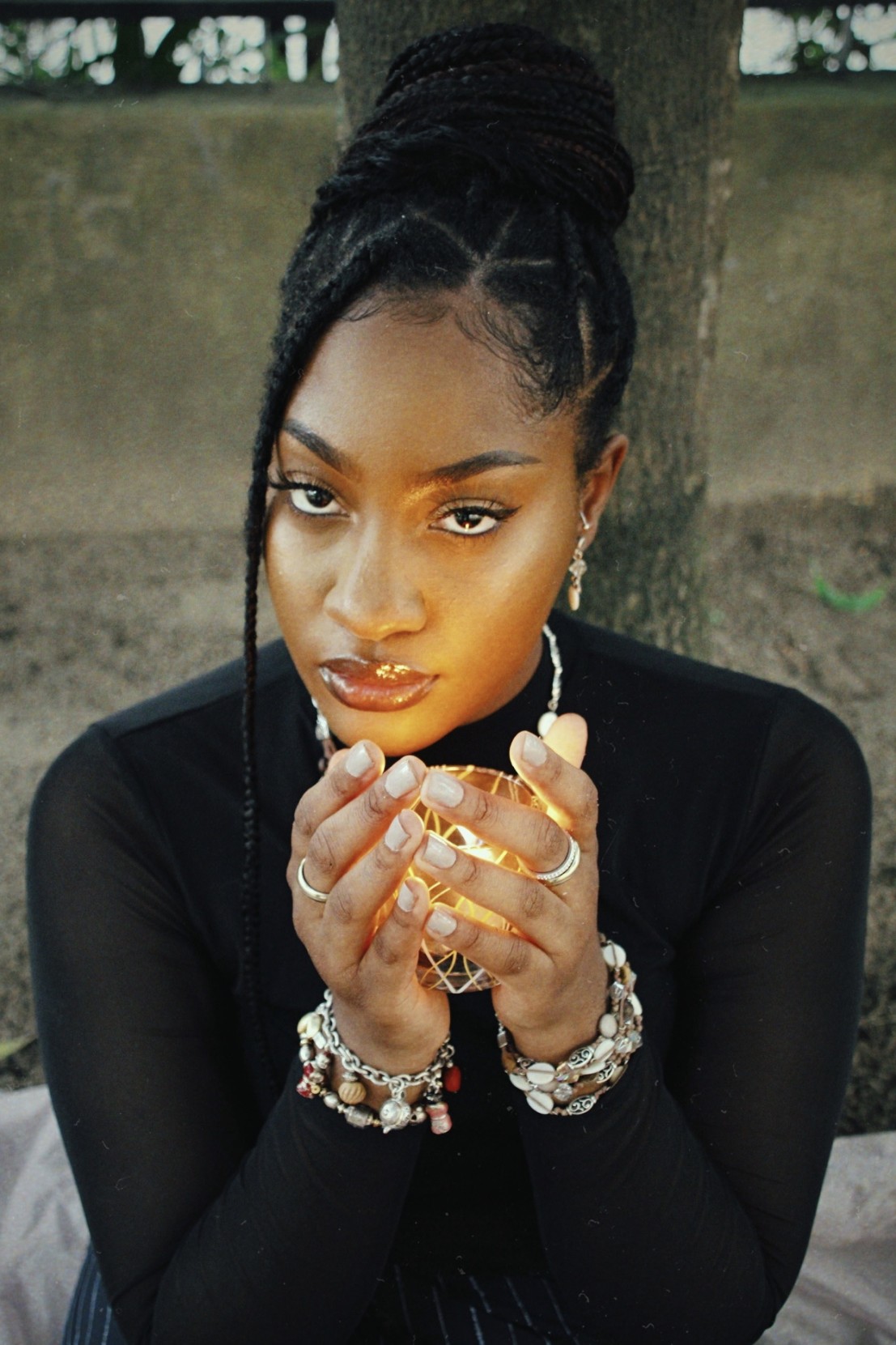 Tems has been in Los Angeles for a few weeks, going to meetings and playing a lot of sessions. “I’m always working,” she laughs. “My work is my life though... I would always choose this life over what life was waiting for me at the office desk.” Although she’s enjoying seeing the world from a wider lens, a treasure that her music has afforded, Nigeria is never far from Tems’ mind. She’s quick to tell me about other artists from her country that she believes deserve recognition, including The Cavemen (a duo playing highlife fusion), Lady Donli, Tomi Thomas, and Show Dem Camp.

As music has never felt more global, Tems’ rise is also a positive thing for Nigerian representation in music. “People are seeing Africa and West Africa for what it really is... it’s a gem,” she insists. “There’s so much talent, there’s too much. With the internet now it’s so easy to get your music across the world. It’s inevitable that Nigerian and West African music will continue to grow.”

Vogue recently cited Tems as one of the musicians transforming conservative culture in Nigeria, a weighty tag. When I ask her about this, she is resolutely humble. “I think music helps people release but people have been using music to escape since before I was born. I’m just one of the people that helps people cope with life.”

Sometimes when you interview a musician, a dichotomy can often be observed between their speaking and singing style – perhaps a soft-spoken shyness in conversation from an otherwise abrasive performer. But there is no such distinction with Tems. She’s as serious and sincere in conversation as she is in her songs; she’s pensive but forthcoming with her answers, self-assured in her delivery. It’s why a sense of destiny seems to exist around Tems: the artist who knew she belonged in music and not in the office, the woman who saw herself rising higher in the world.

Her profound self-belief never feels self-serving though. When Tems describes the real meaning of her music, it’s filtered through her connection with her listeners. “I believe that me singing is a gift from God and I felt at the time that I was meant to use my gift to reach someone, even if it was one person or ten,” she says. “I just wanted to share my story and my life with someone going through the same things I was going through.”

Tems' EP, For Broken Ears, is out now.