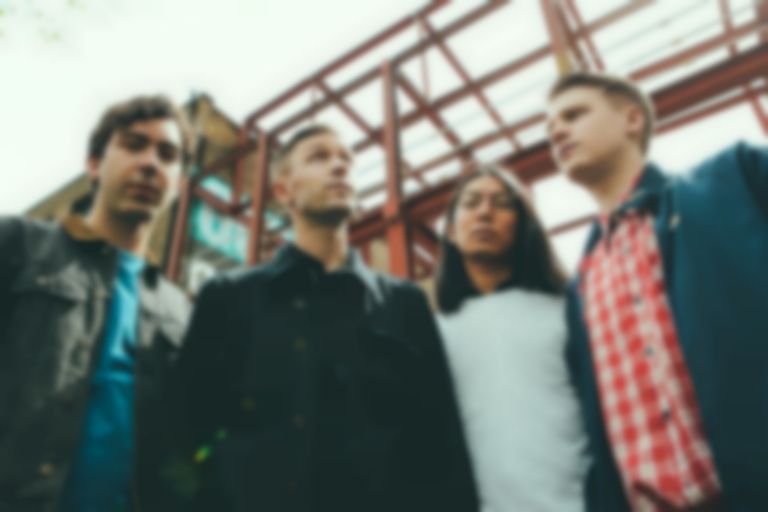 However, for some members, the record might not strictly class as their debut. Whilst their trademark laid back production and minimalist approach to indie is fresh on the scene, three of the band may be recognisable for what was left of much loved indie pioneers, Pete and the Pirates. Reinventing themselves into something all together different and starting again from the bottom, their reincarnation couldn’t be slicker this time around as sparse instrumentation and intelligent lyrics show the musicians have fully evolved.

Having been busy notching up their live stripes supporting big players Suede, Maximo Park, Franz Ferdinand and Connan Mockasin of late, Teleman are set to make a mark at this year’s Field Day after impressing on their UK tour. Before all that though, we sat down to discuss what’s been going on since the sinking of their last project.

So how did Teleman come about after the demise of Pete and the Pirates?

Thomas: Maybe we’re the phoenix from the ashes? Though I prefer to think of it as no ashes involved - as one thing finished and another thing started. A couple of the guys left so we decided to stop completely then after a while me, Jonny and Pete decided to carry on making music. Pete and the Pirates was us five and now this is different.

Do you mind people making the connection between Teleman and Pete and the Pirates?

Pete: It is definitely separate. We just used to be in another band. There is no musical link really.

Jonny: To some people it is an important link though. They hear a song on the radio and they know that voice. In that way there is a link to it but we never dwell on it.

Thomas: Maybe when this band gets bigger than the last band in scale, people will forget about it.

Having had some musical success before, did it feel as if you are starting all over again with Teleman?

Pete: We’ve had to start all over again.

Jonny: It was really nerve-wracking actually, going back to the beginning. We went back to nothing basically, without even a name.

Pete: Jonny also used to play drums and now he plays keys, so there were other new aspects too.

Thomas: I think it was the right way to do it though too, otherwise you’re not really finding your own identity if you try and pick up from something that you left off. It has to be something new and built up from the ground or there are no lucid foundations.

Do you think the fanbases are similar?

Thomas: I would say yes, there are definitely a few there but I also like to think the majority have discovered us anew. We’ve got some really crazy fans and emails. Like people being furious that we’re not playing in their town. Half of the emails are all “I think you are really great, I am in love with you”, then the rest is pure anger.

Pete: People just want everything right now these days so it is quite good they can’t have it.

Your debut album Breakfast is released today, how has the process been of putting it together?

Thomas: It’s taken bloody ages. It’s been a labour of love and really enjoyable. It wasn’t a solid year of working, it was done in little bursts here and there. The good thing about it is that we’ve had lots of time to reflect and loads of listening time. Going back and listening with fresh ears is quite rare these days. It was really nice and a luxury I think.

How are you planning on celebrating the release?

Jonny: We’ll probably all go out.

Thomas: We should go on holiday somewhere and go down to the beach. A stag do, even though no one is getting married. It could be just the lads.

Pete: We should just invite our managers to the pub and then they can pay!

The record was produced by Bernard Butler, who famously worked with Suede, how was that experience?

Pete: He’s an awesome guy. We had to meet somewhere in the middle as he wanted to go bigger but we toned it back a bit with the productions. There was a meeting of minds in some ways.

Jonny: We started off with the idea that we wanted everything to be kind of sparse and simpler sounding. At the beginning we wanted to be very minimal. Bernard’s ideas were slightly at odds with that and I think he wanted it to be quite lush. We’ve kind of fallen somewhere in the middle of those two.

Thomas: I think we had a good relationship with that though as he listened to us. He wasn’t pig-headed and stubborn and neither were we, for better or worse. I think what he gave to it in terms of instrumentation and range was key. He’s got some really lovely synths in his studio and gave it a peppering of good sounds. It all added an extra texture to the songs.

Your single “Steam Train Girl” was released via your own imprint but Breakfast is being released via Moshi Moshi - how come you didn’t want to self-release it?

Thomas: It was a technical thing at first, as we didn’t have a label. Moshi Moshi managed us so we did their singles club where you can only release one single per band. The second one, we had to release ourselves, then they signed us for the album.

Were you surprised at how well first single “Christina” was received?

Pete: Yeah we were, as no one really knew our music, but it got picked up on radio well. We weren’t really ready for it. We were on the back foot a bit there. We’re ready now though.

What kind of bands has influenced your sound do you think?

Jonny: We really liked the production on the Baxter Dury album. We talked about that before we went into the studio and also a band called Beak.

Thomas: Both of those bands use old synthesisers but also have a lovely separation to the sound. Their music is quite pure and all about the songs. Our sparse sound kind of evolved from that and went somewhere we weren’t expecting at all. There are more guitars on the album than we originally thought there would be, partly because of Bernard being a guitar god. I write mostly on the guitar so I guess that was bound to happen. It’s not something we’re shy of. There is a healthy amount of guitar - it is not a dirty word for us.

How does your songwriting process work then?

Pete: Thomas writes the songs and we all add our little flourishes.

Thomas: You never really know what is going to happen, so it’s quite an exciting process in a way. Nothing is really ever set in stone. Also playing live, the songs develop in another way. You may have already recorded it but songs always seem to be changing. In a way, the recording is a snapshot of a song at that moment.

And what about the lyrics, do you write about your own life?

Thomas: I suppose it is a diverse pool of things. There is no one topic. It’s not all about me or even about someone at all. I’m interested in words and lyrics that are interesting in themselves and not boring.

Does that mean Christina isn’t a real person?

Thomas: She is a real person but I like ambiguous lyrics.

Enough said! You’re about to go on a headline UK tour, are you excited?

Thomas: Yes, very. We’ve been doing a lot of supporting, which is totally normal for a band that hasn’t released an album. It’s great but we’ve been spoilt with really big audiences. You sound huge and are living this dream but they are not your audience and it’s not your show. Now it’s our own shows, realistically we’re only going to be playing to small rooms. I’m looking forward to that. It’ll be real life.

Jonny: It’ll be pure fans that have just come to see us… unless they’ve come to see the support.

By supporting those bigger artists like Suede, do you think you learnt any tips?

Pete: I think by watching the other bands play you pick up different things in stagecraft. The way you express things in front of a large crowd is different than a small audience, as people can’t see the detail. People really react on mass when they have something to react to.

Thomas: We did a Sofar show in someone’s lounge and there were about 30 people 40cm away from you - staring at you. I couldn’t bear it. It’s too intimate.

Pete: I like it more and more, just getting away from London.

Thomas: I think you learn how to deal with it. You learn tricks of the trade when you’ve done it for quite a long time. Our tricks are to not to get fucked every night as you’ll destroy your body and your brain. You’ll end up hating each other. We went to Yorkshire Sculpture Park on our last tour. We all like curry so we have a list of the best curry houses in the UK. Another tip is finding the nearest Wetherspoons.

What’s coming up for Teleman then beyond the tour?

Pete: We’ve got an instore at Rough Trade East on the day of the album release.

Pete: We’ve then got a long list of festivals like Field Day, Wilderness and Secret Garden Party, Green Man and one called Deer Shed?

Thomas: We’ve never played Field Day but we’ve been. It’s right on our doorstep so it feels like, not like a Holy Grail, but something we should play. We’re pleased to be on the bill.

Pete: Then it’ll be Europe and America at some point.

Jonny: We’d like to go to Scandinavia, if someone is reading this….

Pete: ...And also Australia and Japan if possible!​