There is a subtle, voguish fire in Lauren ‘ren’ Isenberg’s music brand. Not only is it taking her to extraordinary geographical places, but it’s connecting her with big names in music - including an opening set with Yungblud.

Having practically just landed in the UK the day before this interview, the charismatic 19-year-old Canadian singer-songwriter explains that she's forced herself to stay awake the whole day. “Honestly, I’m feeling pretty good” she reassures me. Despite the feeling of jet lag, Isenberg is on great form when I meet her in central London. If she's tired, she doesn’t show it.

Isenberg’s earth-bound warmth feels refreshing, and despite her teenage years, there is a maturity beyond her years, a self-awareness about her that is both striking and rare. She is based in LA for the time being, but as she is keen to point out, the glamourous county is not her home. She is there because it’s convenient and it’s where chunks of the music and film industries are located, but it is not her preferred location when it comes to writing and actually being creative. Born and bred in Toronto, it is also her true creative home. “It’s a great environment to grow up in. It’s a huge city, it’s very diverse, but it’s not as overwhelming as and not as big as London, so it feels like home.”

The idea of feeling at home, the feeling of being connected, the need to relate to others, is at the core of renforshort’s new EP. off saint dominique is revelatory. An emotional expression, it offers raw honesty and openness. There are emphatic narratives, and the six tracks explore a range of scenarios, such as falling in love with someone who isn’t your usual type, friends who adapt their personalities to fit whoever they hang out with, and feelings of isolation and loneliness. Even though the scenarios are universal, they are given a different treatment, and many listeners will be able to identify and connect with them. Isenberg is really happy with the record: “they are all representative of this time in my life,” she says. “They feel like time capsules.” 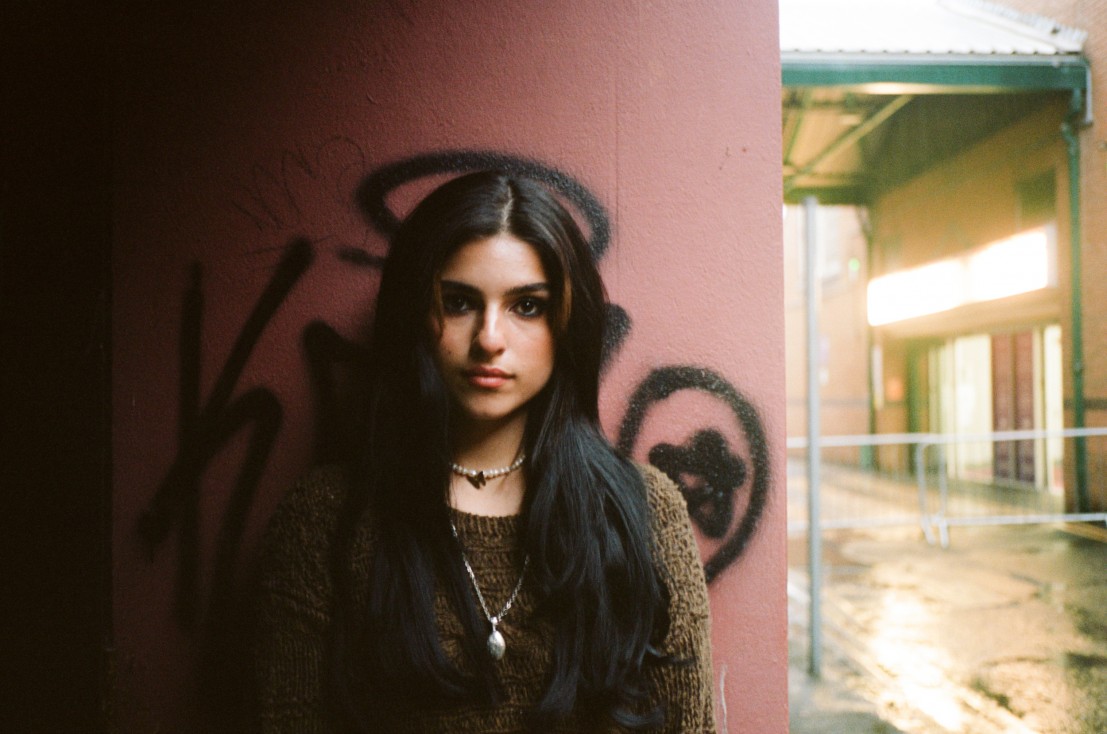 The new release links themes across a combination of songs, and the combined material depicts a recent point in her life. As we discuss it, it becomes clear that the intervening years have been a time of angst, isolation, and above all, change. The pandemic clearly played its part in terms of added challenges. But the songs also describe a time when she began to open up more about her emotions. “I like writing about experiencing new emotions and new things. Capturing something when it is just so fresh that I want to write it down and put it in a song.”

Every song on the EP offers such opportunities. Take her song “I drive me mad,” containing lyrics such as “I drive me absolutely crazy, I feel bad/For you 'cause I'm so fucking paranoid and sad/All the time, you could blame it on my mind/And now I'm mad, I drive me mad I drive me mad.”

There is a dramatic intensity to Isenberg's songwriting, too. She explains that it is part of her creative centre, and there is a discipline to it. Art and creative expression have been key in her life for as long as she can remember. The youngest sibling of four, her three older brothers also play instruments. She took piano lessons from an early age and later went on to learn to play guitar, bass and drums.

She tells me that both her parents have musical passions too: Isenberg’s Mother managed band fan clubs during her time at high school, and at one point she even became head of Santana fan club, while her father played bass in several bands. Together they would expose her and her brothers to a diverse range of music, which meant she picked up detailed knowledge from listening and watching TV programmes on acts such as Nirvana and Amy Winehouse, while her passion for music just continued to grow.

Feeling certain about the scale of her ambition, Isenberg knew she had great vocal potential and ability which she wanted to develop. She got involved in musical theatre through school and was cast in roles in titles such as Mary Poppins, the Wizard of Oz, The Rocky Horror Picture Show, and Mamma Mia.

She continued with this for years, until she could not participate anymore. “I loved it, it was fun, and I didn’t stop until I absolutely had to, but the reality was that I couldn’t act.” Her parents would continue going to see her in numerous elementary school plays, adding that no one could act in them, but her parents would show up every time. “They were just such troopers. It made me confident.”

The creative impact of long-term involvement in musical theatre is profound - there are lines to learn, movements need to be coordinated, and the voice must stay active and healthy. It is a real confidence booster, and it helped Isenberg build her creative stamina. It shines through her personality as well as her music, others have been picking up on it too. On a personal level, she sounds confident when she talks about her music, and when you listen to her vocal technique, observe and hear her projection you sense noticeable confidence and ability compared with many artists of the same age within the same genre.

"Yungblud has given me so many opportunities, and he has been such a role model to me. He is a great person, and I enjoy spending time with him and his team."

This brings us to her recent catapult into success. Linkin Park’s Mike Shinoda was keen to collaborate with Isenberg, and. After seeing a Yungblud live show in Toronto three years ago, she was sold on Yungblud and they soon became collaborators and friends. “He has given me so many opportunities, and he has been such a role model to me. He is a great person, and I enjoy spending time with him and his team.” Yungblud remains an ongoing admirer and supporter of her and her body of work.

While we speak, I start to piece together how while some people mean everything to Isenberg, she doesn’t care about how many friends or connections she has, more important is the need for the relationships to be authentic and sincere. It is a consistent focus on quality more than quantity. “I have a couple of friends. It is not so much, but that's enough for me. I miss them all the time, they visit me sometimes, and that's all I need.”

This selective approach is what enables renforshort’s way of tackling relationships with snappy, razor-sharp insight as she demonstrates on off saint dominique. Closely navigating themes that deal with the complexity of being a young adult, her second EP is full of emotional depth and comes from the perspective of maturity and wisdom. Isenberg’s hymnal vocals are as pop-oriented as they are punk. 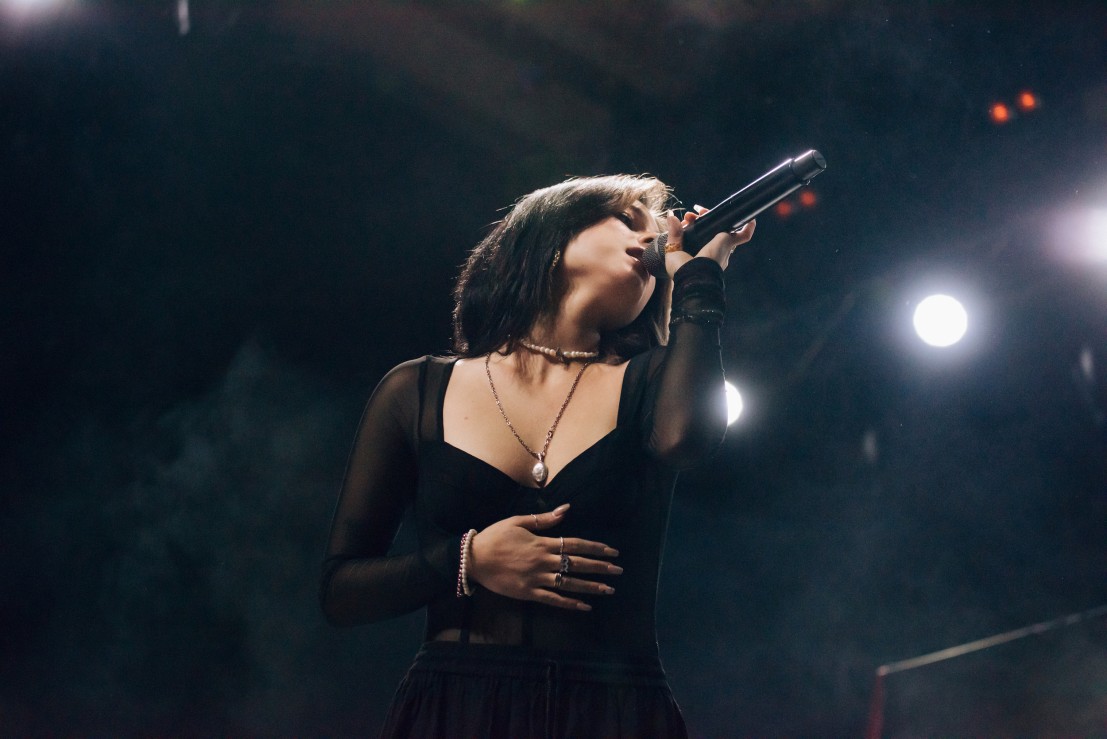 Having spoken with Isenberg in more general terms, our conversation turns to the music itself, and the stories behind the singles. The Amy Winehouse inspired vibe of “Wannabe” tackles the idea of someone who adapts their personality to whoever they happen to be hanging out with. Written over Zoom with a friend who lives in New York, while Isenberg was at her Montreal base, it is a distinctly atmospheric track. A different feeling is portrayed on “Virtual Reality”. Tackling loneliness, the track is reflective of a time when things were less cheery than she wanted them to be. Eclectic to the core, the song has remnants of hip hop, punk and hyper pop. Creating this track was liberating for Isenberg, it was the realisation that she wanted live drums “I wanted that grungy feel, that was the inspiration for the song. You can tell the drums are Nirvana-like, it is messy, just like Dave Grohl’s drums.”

On the other hand, “Lust to Love” is Isenberg’s favourite song on the EP - written at a time when some friends came visiting, and they all stayed in her apartment. She loves Arcade Fire’s The Suburbs album, and she was keen to create a sound reminiscent of one of her favourite records. Lyrically, it traces the emotional highs of being in love.

This year alone, renforshort has been awarded Apple Up New Artist in Canada, Vevo DSCVR Artist, YouTube Trending Artist on the Rise and much more. Not to mention the fanbase she is in the process of establishing. Still getting used to the direct engagement with her fans, she is enjoying the novelty of these experiences. She has already enjoyed some special moments with fans, and when she played in Chicago, she ended up chatting with a group of them for a while. “It was really crazy and overwhelming in the best way possible, I was so happy, it was such an emotional experience.” Part of her amazement is down to the fact that crowds have started singing her lyrics back to her at shows. Being used to doing that herself with bands and artists she admires is one thing, but she is still getting over the idea that her own fans are doing it, this time the songs actually belong to her.

We move on to the writing itself - her techniques and emotional availability. What provokes her to write? “Toronto,” she replies. For some reason, which she is still trying to figure out, writing just feels much easier when she is in Toronto. “I feel way more inspired now. It has been a little hard for me, and it still is. As I write more and more music, I realise that I need a break from my life, because it comes to a point when it doesn’t feel good. But then I go home for five days, and recently I came back to LA with the best songs that I'd written in a whole year. Realising when I need to go home is really important.”

It is about trusting your instincts, Isenberg tells me. The process of making music that truly reflects her as a person seems naturally embedded in who she really is, as she continues to grow as a person, creating sonics that are new and exciting. It is still early days, she is just the beginning of her journey, but she is making an extremely promising start.

off saint dominque is out now via Interscope Records.