Sunflower Bean are fully embracing the joys and woes of modern life.

When Sunflower Bean took a much-needed rest from touring Twentytwo in Blue, which extended further than they could then know, they didn’t have a clear idea of which direction they’d be going next. Although the ecstasy and agony of 21st century living defines their third LP, this was a story gradually realised as the songs came together.

“It felt like there was this yearning and a lust for life in the songs,” guitarist Nick Kivlen reflects. “There were a lot of elements of hedonism and duality. The songs are often sincere but also cynical, and that grey zone is a really interesting place to be. A lot of it is commentating from a distance, but part of it is also very real to our lives.”

The band’s genuine experience and observations shine through the 11 tracks on Headful Of Sugar, navigating the ambiguous path through our gritty reality with a wise perspective, and yet maintaining a wide-eyed simplicity too. “We are an American band, we are American people,” lead vocalist Julia Cummings states simply. “We like to talk about big things in really small, really personal ways. The record is obviously taking into account a lot of recent cultural and political moments, but we don’t use those terms to frame it. We’d rather address things as we know them - as people.”

Their outlook as people is framed by the era they have grown up in; a generation pacing the middle ground between stubborn millennials and frantic zoomers. “We are the true zillennials,” Cumming declares, despite drummer Olive Faber having never heard the term. “The ways of developing your own tastes changed while we were growing up. We all went through different musical phases in our lives, but we never definitively formed our identity and said: ‘well, this is it.’ We were part of the beginning of what I now see a lot – total freedom. We’re entering the era where people have accepted their own tastes and who they are.”

It is this ruthless and unrelenting grind that has come to define existence for many, with hustle culture leaving ambitious creatives working constantly only to earn no observable reward – ‘made it’ moments are granted few and far between. “That’s part of the duality here,” Kivlen notes, reaching for his sparkling refreshment, “You like the taste of soda and it's immediately satisfying, but then as soon as you’ve drank it, you don’t even really appreciate it. It’s such an amazing, readily available gratification. There’s such a flurry of corn syrup being constantly fed to you, whether it’s content on your phone or subscriptions to a thousand different streaming services, but in the background there’s always a yearning for more, a yearning for something that will truly fulfil you.”

The climb, while seemingly endless, is not aimless, as grapping ever closer to goals usually gives the participation prize of life lessons. In Sunflower Bean’s case, their latest record accumulated slowly behind closed doors but introduced – if not willingly – several new approaches to finding musical fulfilment.

“When you make an album in a set period of time, there’s a pressure to make 15 songs and then that’s it, just milk the shit out of them,” Faber reveals, clueing us in on past projects that were crammed into recording sessions between tours. “Since we finally had time, it allowed us to start to learn how to let go of the initial song; sometimes it takes five or ten attempts to get to the song that you’re trying to write, and that’s an important thing to learn how to do. Forcing something to become what it’s not is always going to be disappointing.”

Rather than capitalising on every speck of output, the tight knit trio were able to experiment with reinvention of their own ideas. If anything, lockdowns might have given too much time: “Next time we do a record, I would not aim to do 80 again,” Cumming jests, “but I would never go off tour and write 15 songs and be like okay, that’s it, we’re done. I now know more about being a songwriter. That was the best part of this process and the biggest difference in how we feel as a band. We can be more confident in the studio space,” she says. 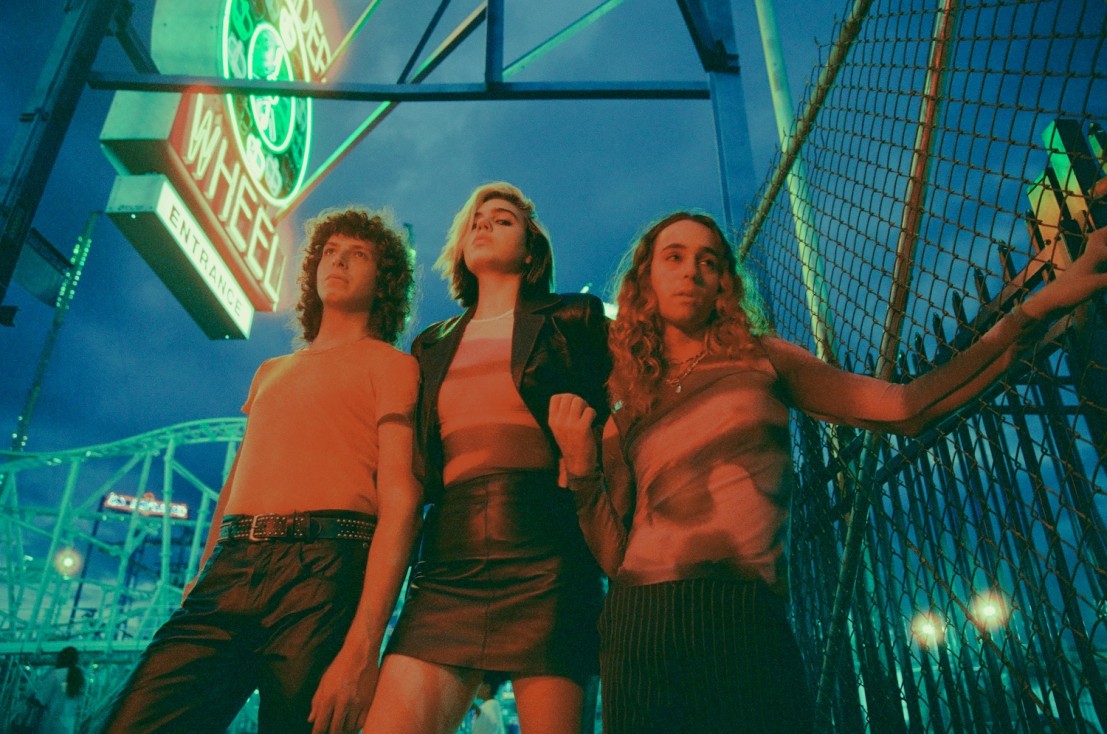 Creating and recreating 80 songs is a monumental change of pace from the four sharp tracks making up Sunflower Bean’s last release, 2019’s King of the Dudes EP. Leaving behind an era of minimalism to fuse fuzz bass and booming drums on an album that deftly blends light and dark, Faber says that, “that contrast is a driving force, and juxtaposition is always important.” This manifestation of multiple perspectives was the result of moving on from adored, and perhaps idolised, influences.

“When I was in my early twenties, I really romanticised the past,” Kivlen admits. “I loved music from the 60s and 70s, and I wanted to live in that era. I wanted to see Pink Floyd in 1972. [Julia] wanted to see Marc Bolan on Top Of The Pops in 1974. Maybe that was our biggest breakthrough – embracing the now, wanting to live in our world. Being in the present moment without looking back.”

‘It’s really about comfortability,” Kivlen clarifies. “If you’re comfortable and unfulfilled, that’s a super bad combination because it’s hard to push yourself to jump off that cliff, take a risk and change your life. Maybe you’re going to struggle really badly, but you’ll end up somewhere else. If you’re not happy but you’re always comfortable, that’s a tough situation that a lot of people find themselves in. Life in countries like ours can sometimes be sheltered and easy, but also extremely unfulfilling.”

Proving the death or at least the transformation of the American dream, the infamous GameStop stock inflation of January 2021 did not inspire this track but nevertheless became an integral part of its story. People in their twenties came together in a cynical embrace to take the ultimate gamble, pumping money into a worthless stock to evidence the lack of tether between the stock market and reality, and maybe paying off their debts along the way.

“People were aware that the whole system is evil, but still celebrating it and making money off of it. It made me giddy, you know?” Kivlen smiles, although the more sinister side of the situation’s very existence cannot be avoided. “In this world where a lot of meaning and a sense of wellbeing doesn’t add up to anything, all you can do is keep chasing that high. Everyone’s trying to look for a scheme. People are realising that economic stability isn’t going to be the same for our generation as it was for those before.”

Again, Sunflower Bean demonstrate a grounded understanding of the highs and lows, the wins and losses, of the life they experience and share with others. They make the analogy of the album being like a short film, telling a story through everyday experiences – this relatability is key. “It’s a very hopeful record that is yearning for experience, desperate to experience life,” the guitarist continues, and that yearning for connection stems from a hunger to escape the mundane existence that settled in during recent years – this trio are working hard to shake that off.

Headful Of Sugar is out on 6 May.