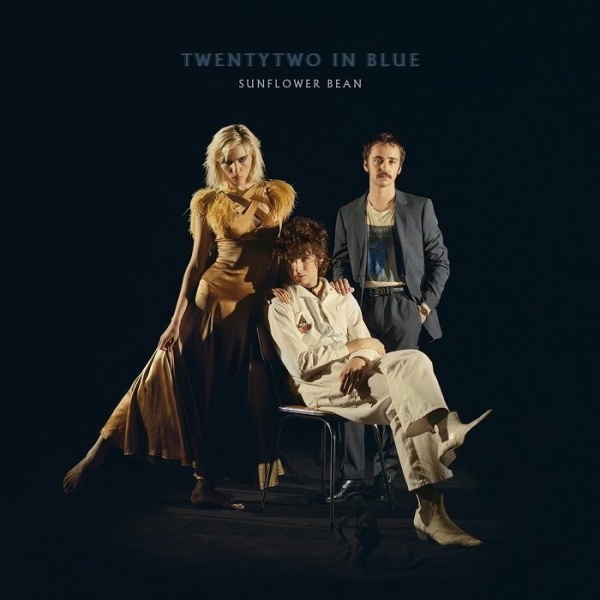 Of all of 2016’s celebrated new music seedlings, Sunflower Bean were one that seemed to bloom particularly tall and enjoy deep-rooted applaud.

The Brooklyn-trio’s popularity came simply from their earnestness, sounding exactly as they actually were: a group of young friends getting together and playing the kind of music that filled their airways as teens, wearing their influences openly and without pretension, the gestalt of which produced a very familiar but nostalgic and perhaps somewhat lost feeling for many adult music fans.

Thus words such as ‘youthful’, ‘energetic’ and even ‘childlike’ were thrown like roses at the band’s acclaimed debut Human Ceremony, which was recorded in a week at the age of nineteen.

Though this no doubt added to the trio’s ‘raw’ appeal, the band’s second record Twenty Two in Blue, released this week, two years and two months since their debut, sees a smoother patchwork unveil.

The record’s title also refers to the fact that each member is now twenty-two, and from the classic rock groove and rhythmic gasps of opener “Burn It” (“This town, let’s burn it to the ground”), the Brooklyn friends seem galvanised in full momentum from the record’s predecessor.

“Crisis Fest” has the same rhythmic punch, as does “Puppet Strings”, which echoes Norman Greenbaum’s “Spirit In The Sky” and churns it out with every EQ knob at top level. Co-produced by previous collaborator Matt Molnar and Unknown Mortal Orchestra’s Jacob Portrait, the textures of the record give these tracks the edge they need whilst tastefully capturing the sounds appropriate to the eras they pay homage to. Recent single “Human For” is packed with particularly grizzly cuff, as Cummings ominously demands “the sound of the drums, the drums / I need the sound of the drums” over Faber’s Velvet Underground-style, heavy surf-rock beat, the kind of chaos-pop that worked similarly well on Wolf Alice’s own second LP Visions of a Life last year.

Faber obeys and gives us the drums in one of the several, simple rock-beats that lead, or lull, us into one of Kivlen’s psychedelic breakdowns. These moments stick out less severely than in Human Ceremony but still act as a reminder of the band’s garage-rock, DIY appeal.

Ultimately though, it’s Cumming’s vocal development that truly stands out from the band’s debut, soaring with vulnerability and falling with perfection, flaunted most in the record’s smoother side, such as the comforting “Only a Moment”, the Rumours-esque “I Was a Fool” and “Twentytwo”, and the inescapably nostalgic “Memoria” in which she mulls “The past is the past for a reason”.

Though much is often said about Sunflower Bean’s sounds of the past, Twenty Two In Blue is an impressive reflection of their formative years and a place to start talking about their future.