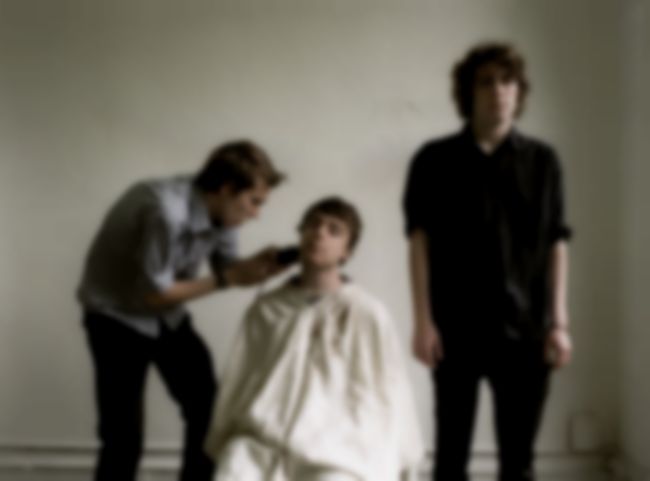 Sydney trio Seekae are an electronic group, kind of. I mean, that’s the description you’ll get from a quick answer, but it’s not all encompassing. Listening to their newest effort +DOME there are certainly moments of computer glitching bliss, but it’s not as synthetic as you might expect. Instead Seekae deliver a very human craft of songmanship. There’s something unnervingly natural about their sound. Neighbouring contemporaries So So Modern spring to mind, but with a little less adrenaline and a lot more reflection.

I caught up with John from the band as he ‘froze his tits off’ in the UK and ask how the recent European shows went. “The tour was great fun” he replies. “We travelled to loads of cities around England, drank real ale and set off fireworks. It’s our second time touring around Europe, and it was good to see a bigger and better crowd response than last time.”

One thing I always find when bands from outside the UK tour here is they develop an unhealthy obsession with Marks and Spencer. I ask how Seekae fares with service station grub. “Funnily enough we’re huge fans of M&S, especially their sandwich deals; BLT for 2 and a half quid? Yes please. We’ve had some pretty awful food from service stations, but the best things are generally Quavers and Irn Bru.”

On the band’s Facebook it jokes, “They’re just pressing spacebar.” I wonder if this is commentary or if someone really said that to them. “We were playing a support gig in Sydney to about 12 people” recounts John. “The atmosphere was so quiet that the guy didn’t even need to raise his voice for us to hear it. That was a low point for us all.”

Focusing on the higher points then, specifically new record +Dome, I ask if John is happy with the way it’s been received? “Yeah, its exciting to see it being well received overseas as well as locally” he enthuses. “The general consensus seemed to be that people like it, but are eager to see how we develop further, which has kept us focused on writing new material.”

So when writing the new material, did you write thinking about how it would translate live, or do you make the music and then try and figure the show out? “We basically made the album then developed the live show. It was quite hard for certain songs, as they were composed almost entirely on the computer and we had to try and translate parts to drums/guitars/synths etc. But it was an enjoyable challenge, and in some cases we prefer the live versions of the songs to the album versions.”

In the couple of times I’ve been to Sydney it has always seemed like a great city for music with venues like The Annandale Hotel, and radio stations like Triple J and FBI. I ask how supportive the scene there is, and if Australia’s distance from other countries creates a real obstacle for bands wanting to break internationally?

“The scene is Sydney is relatively small, especially for electronic music. It is, however, growing rapidly, and everyone involved is incredibly supportive of one another, which is great to see. From our experience it can be hard to break the international market, as trips to America/Europe are expensive, and you start off playing most of your shows in empty venues. The only way to break the market though is to remain persistent, and get a Qantas Frequent Flyer card.”

And as our chat draws to a close, John has one last message for readers: “Keep your eye out for a Seekae release 2012!” I certainly will.

+Dome is available now through Rice Is Nice / Popfrenzy.