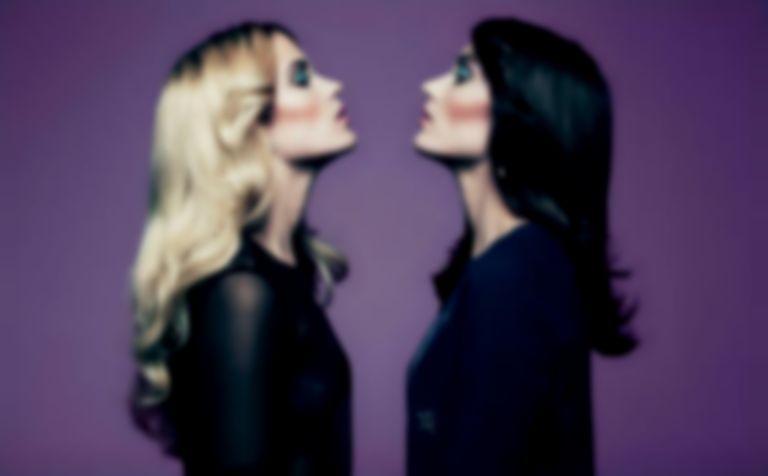 Best Fit last spoke to Miranda and Elektra Kilbey back in December. At the time they were called Saint Lou Lou and were riding high on a wave of universal love for their debut single, ‘Maybe You’.

Six months later – it’s all change! A passing-off action from an act with a prior claim to a similar name saw them defending a Cease and Desist and has resulted in the Scandipodean twins (yes, we’re still trying to make ‘Scandipodean’ happen – get involved!) having to go back to the drawing board.

Choosing not to stir too far from the original, the Kilbeys recently resurfaced as Say Lou Lou and accompanied their name-change news with the announcement of a new single, the nothing-short-of-tremendous, ‘Julian’.

The new single and the girls’ forthcoming show for Best Fit at London’s Madame JoJo’s is a good excuse to have another chat with them, so we caught up with the duo for a Skype-rendezvous during their recent visit to Japan. “It’s a good thing we’re not doing video chat”, Elektra says with a giggle. “We’re here in kimonos that we got from our hotel and we’re lying on the bed”. Having arrived in Tokyo only a couple of hours earlier, they are trying to stay up for as long as possible in an attempt to get their body clocks in order. “We’re half-sleeping”, says Miranda. “We’re jet-lagged. We don’t want to fall asleep!”

Although the sisters are used to sharing their time between Sweden and Australia, the burgeoning amount of travel they’re having to take on as their music career takes off poses a bigger challenge to healthy slumber habits. Are they coping ok? “It’s become more normalised so I haven’t reflected on it, really”, says Elektra. Miranda adds: “I think sleep, to us, has become a thing you do whenever you can”. So they seize the moment as and when they can. “If you see that you can have half an hour here and there, you go and do it”. “Go! Go! Go!”, Elektra pipes up. “We try and catch up on it all the time. But it’s also so much fun that I think –“  “It’s never boring – we’re always going somewhere and doing things that we think are so much fun”. “And we’re still so young, Doron!”, Elektra interjects. The use of my name here, coupled with her tone of voice, ensures that if, per chance, I erroneously thought that I was chatting to a pair of old pensioners, I should think again. “We’re so young”, she repeats, “we’re only twenty-one!”

Well, in any event, all this extensive travel must surely be good for their air-miles. “Yeah”, Elektra says with a hint of realisation in her voice. “We hope someone is keeping a tab on our Frequent Flyers”. That should be the primary function of a manager, I suggest. Miranda agrees. “I’m going to ask him, actually, when he gets back”.

So what about this name change, then? “Well, another artist had a similar name and didn’t allow us to keep ours”, Elektra says. I ask whether this came as a big blow to them. They consider this for a moment. “It was the first big difficult thing for us to go through because of all the legal trouble –“  – “we felt that our identity was much more about the music than the name or anything else, I mean obviously we were connected to the name but the blow was more to the time and money and our energy, just because it took so much out of us fighting the lawsuit”. After a small pause Miranda continues: “It was the first big obstacle for us in our career. Yes, it was really hard and really upsetting but changing the name wasn’t as hard as we initially thought. People were, like, “Ok!”. As long as you don’t make it into a big deal it’s not going to be a big deal”.

They kept the ‘Lou Lou’ part of the name out of deference to a formidable great aunt. In interviews, the twins often portray her as a bit of a scary character. “Poor Lou Lou”, Elektra says in mock-pity. “She’s got a bad rep because of us. I was scared our Nana was going to be like, “you’ve crossed the line, girls!”. But, instead, she was like, “yeah, she deserves it”.

Debut single ‘Maybe You’ came out via Parisian label Kitsuné in 2012, but the twins have since set up their own record label, appropriately named à Deux. “When you’re making music, the scariest bit is to give it away to someone”, says Miranda. “It’s like you give birth to a baby and then you have to give it away to someone else to raise it. And you’re sitting by and watching someone else with it and we were scared of giving it away”. Creating their own label gives them the chance to do things their own way. “It allows you to call the shots”, Elektra explains. “It’s going to be really exciting to be creative director of your own career”.

At the time of our first interview last year, it was too early in the recording process for the girls to be able to give us a real indication of its sound. A few weeks ago they released their Sounds of Spring mixtape which brought together haunting mid-tempo cinematic soundscapes and dramatic grooves, featuring the likes of Rhye, Tame Impala, the Cardigans and Kate Bush. I ask them whether the mixtape is reflective of the album’s mood. Elektra is first to reply: “Yeah, I think it is. I don’t think our music is necessarily similar, but I think that’s our inspiration”. Miranda adds: “Our inspiration for the record will be a combination of Swedish harder-pop like The Cardigans – so, Swedish vibes, combined with more quirky, airy Kate Bush sounds. There are definitely vibes in the mixtape that are common to our sound but I can’t say that our record will end up being anything like it”.