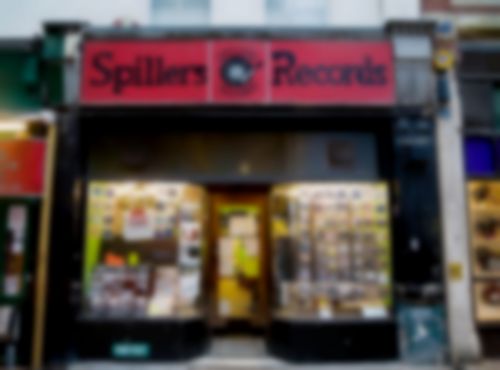 Christmas Eve last year was a dry but freezing day in Cardiff. I packed up my possessions and presents into a suitcase ready to board the train home to visit my parents just outside London. At the last minute I decided to buy the Beach House album as an extra gift for my mum. I rang Spillers, confirmed it was in stock and jumped on the bus to town.

Stepping off the bus by the station, a crowd of old men swarmed my step, waving. Confused, headphones blaring, and struggling with an ever-weighty case I ignored them and landed feet first on a large sheet of ice. Like a newborn fawn I ungracefully slammed into the pavement, bags going one way, legs the other, my hat disappearing under the bus as I let out a pathetic whimper. The old folks rallied around trying to help me to my feet, offering tissues and condolences. It was one of the most mortifying incidents of my year.

Fleeing the scene and fighting back tears I dashed into Spillers where my tale was greeted with sympathy, friendly laughter, and chocolate. I left with a CD and a smile, and that’s why I love Spillers. It’s not just a shop. It’s somewhere you can go and be treated like an friend, not just a customer. The staff are intelligent and passionate, forever willing to help out everyone from regulars to tourists to local bands.

And there you are, something written about the place that doesn’t start by telling you it’s the oldest record store in the world. Although it is, as co-owner Ashli Todd explained to me recently, “Spillers is the oldest record shop in the world. It was established in 1894 by Henry Spiller then passed on to his son Edward Spiller, and then owned by a collective of business people for some time after Edward Spiller.

My Dad used to shop in Spillers and the then manageress was having a mare of the day and she said, ‘Nick, you like records, would you like to be the manager here?’ He said yes. He was a DJ by night and a banker by day and then he ended up working in the shop for several years before he bought it.

And then fifteen years ago I was given the choice either to clear out the shit in the chicken shed or go to work with Dad coz I was about thirteen or fourteen and I wanted to go to the cinema with my friends but he wouldn’t give me any pocket money. So it was like, shit or records, shit or records? I decided to go into the shop with him and stayed in Cardiff for Uni so I could carry on working here coz I enjoyed it. Then in June my sister and I bought the shop from our Dad. It was a really perfect time for it because the end of our lease was happening in the old premises and it was just a natural time for things to pass over.”

At the moment, Cardiff is a city undergoing a lot of change. It’s fairly unrecognisable to the place I moved to seven years ago. The once quaint and idiosyncratic Hayes has been transformed with a giant beast of a shopping center, and the streets are being slowly pedestrianised in a move that seems to sideline a lot of the city’s culture in favour of cheap, bland consumerism. Five years ago Spillers looked set to shut, and a huge campaign ran against the threat. I asked Ashli how it felt to have so much of the city on her side.

“It is reassuring and encouraging, but also quite weighty. First of all there was the Save Spillers campaign, which was five years ago. The reason the campaign started was because the landlord’s wanted to increase the rent twofold at the halfway point in our lease, when ordinarily you should be safe in the terms you’ve agreed on and signed. That was at the exact same time that all the development was going on in The Hayes and trading conditions were absolutely dire. In the summertime you couldn’t have the front door open so it was absolutely gross – everything covered in dust and the fence was so close to the shop. So with The Hayes in a complete mess the landlord thinking it would be a lovely time to double our rent, the Save Spillers campaign started and all the support was absolutely phenomenal.”

The shop held strong and with the lease now expired they’ve found a more inviting home in the corridors of Cardiff’s Morgan Arcade. While it’s only two minutes from their previous walls, it’s a move Ashli seems positive about. “In a way, moving is a bit like a fresh start.

The old place meant a lot to people but it’s not synonymous with what we are. We’ve got our regulars and they’re incredibly supportive. A lot of them came in the day we opened and they had lists with them because we had been shut for six weeks. I say we were shut but I have to add that practically every day we made a sale. We just can’t say no. People are so blasé. They’re like, oh, something’s going on, but anyway, have you got that new Max Boyce album?

Straight away it’s a lot more of an inviting space for me and I love working there. We’re seeing more of a younger crowd coming in. A lot of people have said since we moved that they found the old shop quite intimidating coz it was quite dark and long and narrow and you weren’t really sure where things were. It was like that in the summer. You’d be working inside and because it was quite badly lit, dingy and there was so much stuff in the windows you didn’t have any natural light coming in, and then you’d step outside and be like, ‘Oh! It’s summer!’ So obviously, for me, I love all the natural light.

The other thing I love is being around the corner from Metros. Eventually, when I’m not working so many hours, I’d just like to be able to go out one night and then come in straight to work. That would be quite good, that would be an achievement. I work quite late, so if I’m doing the late shift and doing my ordering it just feels like I’m at a party coz we’re right next to Bakers Row and you can hear everything that is going on.”

But has all the extra support and publicity translated to customers? “It definitely translates into t-shirt sales!” laughs Ashli.

How is it running a record store in a time of illegal downloading and shrinking physical sales? Is it really as bad as the media make out? Ashli’s face casts an unusually serious stare. “It’s scare-mongering totally blown out of proportion with the mp3 thing. I mean Spotify is one of the best resources ever, ever, ever, ever, ever full stop. And youtube. Hundred percent behind them.

When something like that happens it’s not gonna be the downfall of the record industry, it’s a resource that’s really handy and I’m fed up of everybody saying ‘everybody’s downloading, that’s killing music sales.’ It’s not at all. People who want the physical product are still buying it. The problem is they’re buying it in a way that’s actually detrimental to the UK economy and also, it’s an un-level playing field.”

Ashli is talking about sites like Play and Amazon. Based in Jersey, they don’t have to add the extra 20% VAT we all now pay, meaning they can sell cheaper to customers online.

“There’s a slight resentment when someone comes in and uses a shop like Spillers for the information. When you feel like you’ve really provided a service and you’ve used the Internet and you’ve found the song they want, found the album it’s on, is it in stock? No, but I can order it for you, it’ll be here in a week. ‘Oh, that’s alright love, I’ll go and order it off Amazon.’ It’s like AHHHHHHHHH! A little bit of me dies inside.

But it’s that 20% thing. How can we compete with that? I mean, margins on CDs are so small anyway, I guess when something like Record Store Day comes up it is nice for the trumpet to be blown about record shops because we’re more than just stack ‘em high and sell ‘em cheap. Each shop is unique, each one has something to offer and each one is the sum of the people who shop there.”

With this Saturday being the first Record Store Day Ashli and her sister Grace have had running the store in its new location, it’s an event they’re pretty excited for. “If all goes to plan the premises opposite the shop, which is empty and bloody gorgeous, will be set up as the live space for our in-stores. Y Niwl have made the most successful album since we’ve opened. They’re in Bangor on the morning of Record Store Day and they’re driving all the way down to Cardiff to play at five. Meilir playing a little bit before, which is great because it reflects what the shop is about; we’re as much an outlet for people who are DIY as for selling the new PJ Harvey.

The soundtrack all day will be from our customers and friends of the shop. We want to have a kid’s area making badges and designing record sleeves because I’ve worked here fifteen years and I realised the other day we serve three generations of one family. The grandfather of the family buys his jazz from us, Neil who’s in his 50s, the last thing he bought from us was Lupe Fiasco, and then his son as well.

Ooh! I’m doing a fanzine. First ever Spillers fanzine. That’s the most exciting thing. Customers, especially since the move in a kind of nostalgic, reminiscing way, have told me so many amazing things about ‘Oh, I remember when Nick did this.’ or ‘I remember when I came in once and Daniel Johnston was stood there and I made some comment…’ So basically, it’s contributions from some of our regulars and I got some people doing some drawings. And I did say to them, don’t lay it on too thick because we don’t want people puking over the special releases.

Future of the Left are playing in the evening at Clwb Ifor Bach too which is brilliant because three quarters of the staff are completely obsessed with them.”

At the risk of puking on the general releases which line the stockroom walls where our interview is coming to a close, I ask Ashli what the best thing about owning a record store is. “It’s the customers.” She whispers, with a sentimental honesty.

“I work with some lovely people, and it’s the people I deal with on a daily basis. Things are tough for the music industry and until this 20% bollocks of VAT gets abolished, everyday is a struggle. But the best thing in the world is the customers, and there are people who’ve been shopping with us for a long time and they have become kind of like family.”