Performance artist, harpist and pianist Baby Dee has just released her most recent and most experimental LP to date, Regifted Light. In equal measures classically medieval and brilliantly absurd, it is like nothing else on the record shelves, juxtaposing odes to pie with poems about slugs. Yes, really. Sharon Kean caught up with the singer and instrumentalist while she was in the UK to perform with Marc Almond, to find out more about the musician who until lately was better known for her work with fellow New York based artists, Antony and the Johnsons and Andrew WK.

How would you describe your music? It’s not really like anything else, is it?

No, it’s not and I don’t describe it because every time I try to I end up regretting having tried. It’s a losing proposition. You do it – it’s your job!

OK, you clearly have some very classical influences, hymns and holiness, perhaps?

Probably the hymn is one of the biggest influences of all. One of the earliest things I was really interested in and became completely obsessed with was Gregorian music. Which was strange because I really wasn’t a churchy sort of person, but there was something about that music, the simplicity, the complexity and the richness of it. I was totally fascinated. It is every bit as grand in terms of emotional scope as a Beethoven symphony or a Mozart requiem. It’s huge yet it’s just a couple of little notes. At the same time I became obsessed with the miracle of the printed page in terms of music, because you have these vowels and a couple of words in Latin. I would read them phonetically and it would be like having a wild animal in your house, it’s alive and it’s scary. It’s like when a fire starts, suddenly there’s a piece of music and it’s like a fucking miracle, it’s a profoundly beautiful thing.

Where did you first hear medieval music – it’s not on the radio a lot, is it?

I wanted to be musically literate, so I took a class at the Mannes College of Music in New York City in counter point – a musical theory that instead of teaching in terms of blocks of chords, is in terms of lines – it was an important thing in the 1500s, so I got really interested in that.

What instruments were you playing at that stage, and which ones are most important to you now?

At that time I played the piano and had also taken up the harp. I’m a fickle lover – my favourite is the one that I love at the moment. For the last two or three years it was the piano because I had this magnificent Steinway Grand in my house. It’s not mine – it’s Andrew WK’s – but it’s in my house, which is like someone giving you the keys to their Rolls Royce. I really enjoyed it and that was the sound that completely ruled my life for the last three years. Now it’s changing a little bit – I want to play the organ again.

Your last albums, Safe Inside The Day (2008) and A Book of Songs For Anne Marie (2010) seemed far less disjointed than Regifted Light. How does this one fit in and how did you get from the last record to this one?

Slowly! The last album was one of those life-work things, it took years and it was like a whole can of worms for me because I wrote it ten years before it actually came out. I put it out in an unfinished slap dash kind of way, on purpose, thinking that might help in some sort of way. It was about when I was messed up in my life and what was important to me. It was a very serious record, more serious than any of my other records.

Regifted Light has its serious moments, but they seem to be mixed with utter absurdity. For example, ‘The Pie Song’, what’s that all about?

It came from my stupid mind. I like pies – and it stands out on the album. It’s really about the language as much as the pies. I like the directness of the language and the idea of the intentness of a desire for a particular thing and the absurdity of it. There’s bunch of ways that you could say you wanted a pie but I like that you can say “give me that pie / I want that pie / give that pie to me / I must have that pie”. You know, ever since I wrote that lyric – if you can call that ‘a lyric’ – everytime I go to a restaurant and somebody asks ‘would you like a salad?’ I think ‘yes / give that salad to me / I want that salad / give me that salad / I must have that salad’. It’s kinda like a habit of speech now. 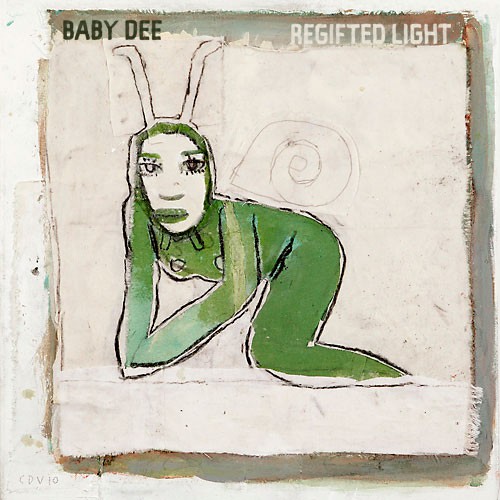 It’s not a very serious song, is it? How does it sit with the more serious songs on the album?

The whole thing about an album is that you should be able to encompass a huge amount of emotional space. Most don’t – they’re all pretty much in the same space and a lot people kinda like that. They want to know what to expect and they want the whole album to feel the same. I don’t get that – I like to think that albums can be more alive and spontaneous and more real life. I like the scope of things, the extremes. But some people have a huge problem with that. They feel betrayed when they open up emotionally to take something in and really take something to heart, and then you do something stupid. They feel like the artist has betrayed them. Some people really hate that. My last album was totally straight and all in that emotional space, so that’s allowed too.

Have you played live any of the songs from Regifted Light?

I’ve played a few of the songs live. I’ve played ‘The Pie Song’ a few times.

What sort of reaction does that get?

How does it feel playing songs from the new album?

Different to the last album. I’m not sure but for some reason I want to play the whole album, you know, start with the first song and play it through and I’ve never ever done that before. We’re gonna tour it in the States in May and try that. We’re doing a two-week thing with the original members of the band that recorded it in my house. We’re even doing a house concert in my house in Cleveland with the same people – that’s going to be really cool. We can probably pack around thirty people in. I’ll be in the dining room playing the piano, and through the kitchen door I’ll see a sousaphone player and there will be all these other people around…

Will you be touring in the UK?

We’re gonna tour it here in the fall, in Europe in September and later in the fall, maybe October, in the UK. I had a great show at Shoreditch Church last September. I guess the best you can ask for is that people get it and they somehow let you know that. You can’t ask for more than that – it’s a wonderful thing.

A lot of people associate you with Antony and the Johnsons, because of your work with him. How much of an influence is that on your music?

It’s not so much a matter of people influencing each other, but more that like-minded people are sort of drawn to each other. I think Ant and I do have things in common but we are really, really different. I like Ant’s music and I like him and the things that he stands for, but he is different to me. He also has one of the best voices of our time and I don’t, so I don’t like being compared to him! It makes me look bad because he has such a beautiful voice and I have a horrible voice. Every now and then you get a reviewer who makes a big deal of it and I find that annoying, but it’s not that big a deal. You’d be surprised how little of that I get.

How did you meet?

I had a job dancing on the bar at the Pyramid Club in New York, at one of those trannie nights. Antony had done wonderful things at the Pyramid with a group called Black Lips, a few months before I arrived on that scene, and that’s where we met. We sort of knew each other and it wasn’t long after that he got some sort of grant and used the money to record his first album. He wanted me to play harp on it. A lot of people make the mistake of saying I did strings arrangements for him, but I didn’t arrange anything. Antony knew in his head exactly what he wanted to hear.

At that stage you hadn’t recorded any of your music – was working with Antony what spurred you on to do it?

When I started writing I didn’t want a career. In fact as soon as I started writing serious music I retired. I didn’t record anything but I wrote songs and sent them to Antony – because I figured, you got to do something with them. So I sent them to him, just in case, thinking he might sing them. That was around the time his first album was released by David Tibet (of Current 93) here in England. Ant sent what I sent him to David, and he wanted to put out a record.

So, what’s next – are you going to write more songs and record another album?

It’s funny, actually, I haven’t even told the people I want to do it with yet. I’m gonna get a Hammond B3 organ and I want to do another album with Andrew WK but with him playing the piano and I’ll play the organ. And I want to work with a friend of ours, Armen Ra, a really great theramin player.