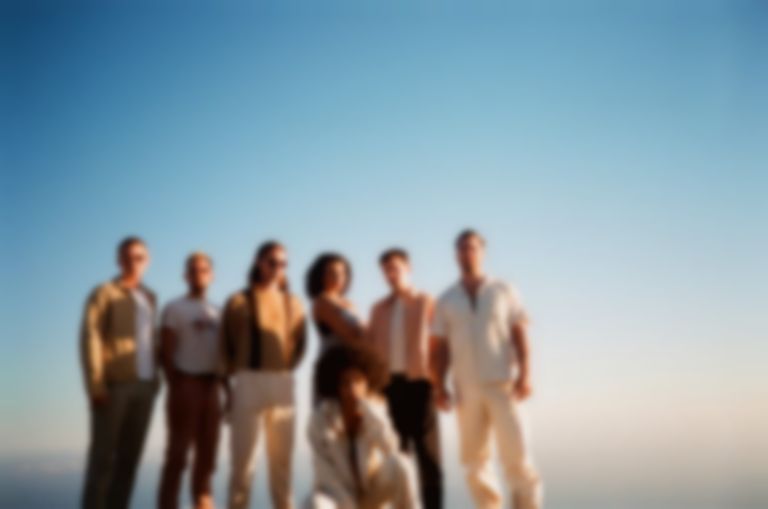 The end is nigh for Jungle. After a heavy year of touring new album For Ever the band are mid-festival season before settling in to making album number three. I catch Tom McFarland for a chat just before he flies to Kentucky and then on to New York for a weekend of shows.

I ask which he prefers: the continuous slog of a tour versus the long-haul weekends of festivals. “It’s just a different experience really” McFarland shrugs. “I think the most settled you ever get is on a bus tour in Europe or the UK, just because it’s familiar and you’ve got your own hibernation area in the bus and it’s sort of like this moving campsite where you’re permanently having a sleepover with your best mates. The long-haul flight takes its toll but so long as you don’t have to play a gig once you’ve got off t it’s OK and bearable. Obviously sometimes schedules dictate that you’ve got to do that. I think it was November 2017 we did a weekend in Asia. We flew into Singapore and did a gig that day, flew to Kuala Lumpur the next morning, did a gig that day, then flew to Hong Kong and did a gig. All in the space of 72 hours.”

Forming in 2013 from the ashes of previous project Born Blonde, Josh Lloyd-Watson and Tom McFarland become known for their slick aesthetics and grooves. Despite having two core writing members, Jungle felt like a collective. Second album For Ever, released last year, brings it all home with the band’s trademark falsetto vocals floating over the dizzying heat of their synth-stoked beats.

It feels like the perfect music to lose yourself in on a sunny festival afternoon. “Festivals are great because they allow you to open yourself up to a whole new audience” says McFarland. As long as you rise to that challenge rather than get intimidated by it. And it can be sometimes when you’re faced with a festival crowd on a main stage who’ve been standing there waiting for Eminem for 8 hours. They’re not best pleased when you turn up. So you’ve gotta work really hard for that, and that’s part of the fun of festivals I think.”

We’re talking a couple of weeks after Glastonbury, where Jungle played a slick and composed set in the blazing sun to a packed out West Holts crowd. “It was amazing” smiles McFarland. “It’s just one of those institutions and I’ve been going as a punter for a long time with friends, since 2010, I was 19 or 20 and that was the year that U2 didn’t play which I was quite glad about in the end. Gorillaz ended up headlining instead. I think the Glastonbury crowd really gets what we do and enjoys it which is really good.”

I ask McFarland if he could go back to the punter life now he’s seen behind the curtain at Glasto? “It’s almost better for a punter than it is for an artist” he laughs. “It’s stressful when you’re playing and you’ve got to deal with people’s guest-lists. When you’re there and you can jump in for five days, you just lose all sense of giving a shit.”

When you’re playing a gig and the stage is high and removed from the crowd and the lights are straight in your eyes, I’m guessing it must be hard to see past the front row. But at a festival, playing in the day, I tell McFarland I’d get lost people watching. “Some people in the band react differently to it - some people love it, some people find it a little bit more intimidating” he replies. “I love it because it means I can connect with people more, making eye contact with the audience at every possible point is really necessary because that’s the ultimate human connection, right? Looking someone in the eyes.” 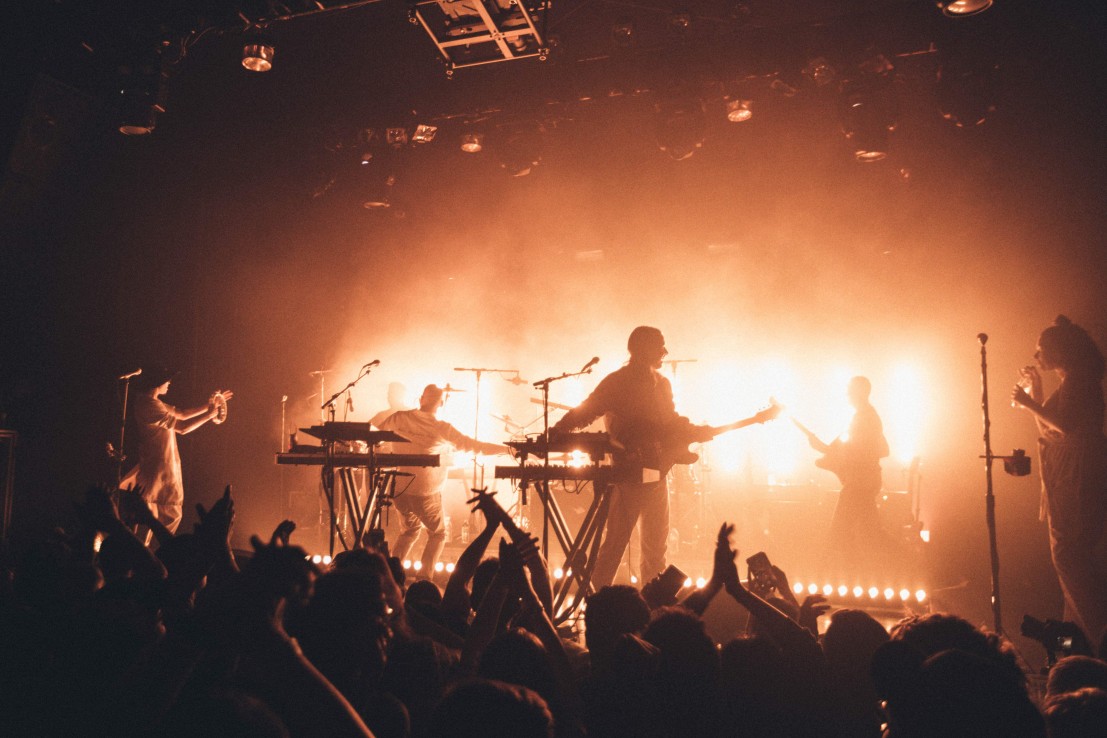 Next weekend Jungle will touch down in Lisbon for a set at Super Bock Super Rock, and it’s a date McFarland is really looking forward to. “We’ve actually had some of our most incredible shows in Portugal, like basically across the board” he enthuses. “For some reason the setting, the crowd, the way we perform the gigs is always really, really top notch and we always have a good time there. We played in Lisbon right at the end of the first album campaign, we’ve done Primavera Porto, we’ve done a festival called Paredes De Coura which is north of Porto, and every time it goes off and we love it, so as soon as we got the chance to go back to Portugal we took it. And I’m not just saying this, but honestly, categorically, we’ll all unanimously say that Portugal has the best crowds.”

Being in a city like Lisbon, which is fast becoming a tourist must, I ask McFarland if he gets a chance to see the city, or if it’s all work and no play? “You get quite a lot of free time during the day, and Josh and I like to spend it writing and making music as much as possible, but in order to maintain your sanity you can’t go bus, dressing room, catering, stage, bus. You’ll lose your mind. So I’ve got some fold-up bikes and we put them on the truck, so whenever we get to a city and it’s not raining or freezing, it’s nice to jump on the bikes and go for a little cycle and see what’s going on. In that way as well, you always have a better gig because you feel more naturally connected to the place you’re in. You’re able to understand your audience better, so you’re gonna perform better. And also it’s my excuse for getting a bit of exercise.”

Ahead of his weekend at Super Bock Super Rock, I ask McFarland for some city tips. “I love walking around Lisbon, I think it’s a really great city to explore” he replies. “But obviously the Time Out food market is insane. You can go and get a plate of steaming hot garlic prawns for like €3. So anywhere I can get my hands on a glass of wine and some seafood, I’m there.”

"We’ve had some of our most incredible shows in Portugal...for some reason the setting, the crowd, the way we perform the gigs is always really, really top notch and we always have a good time there"

When you think about Jungle, those videos are the first thing that springs to mind. The slick choreography and distinctive style that started with "Platoon" has been a thread through their visuals, right up to the recent clip for "Casio". How much involvement do the band still have in making their films? “On the first video that we made, me and Josh and our friend Charlie did absolutely fucking everything” says McFarland. “I went to Sainsbury’s to get all the catering for everyone, I was driving the van to my mum’s dance college to pick up the flooring so we could lay the flooring in the warehouse so the girl could dance on it safely. I was then sweeping said flooring every five seconds to make sure there wasn’t anything on it. Josh was camera opping.

“Then obviously you get to where you are now and you’ve got crew and directors of photography and lighting guys and gaffers and grips and, whatever those names mean or don’t mean. And the concept is ours, ultimately. We’re there on set every day making sure everyone’s happy. When we made the ‘Heavy, California’ video I was just there taking pictures and having a good time really. Josh is much more involved in the actual on the ground creative. I love logistics. I’m involved in that side of the operation.”

I tell McFarland he’s the smart one, because he’s the one who’s gonna be secretly collecting all the Nectar points on those shoots, doing the big shop. “The only thing I’ve bought using Nectar points was a Kraftwerk CD for my brother’s nineteenth birthday” he laughs. 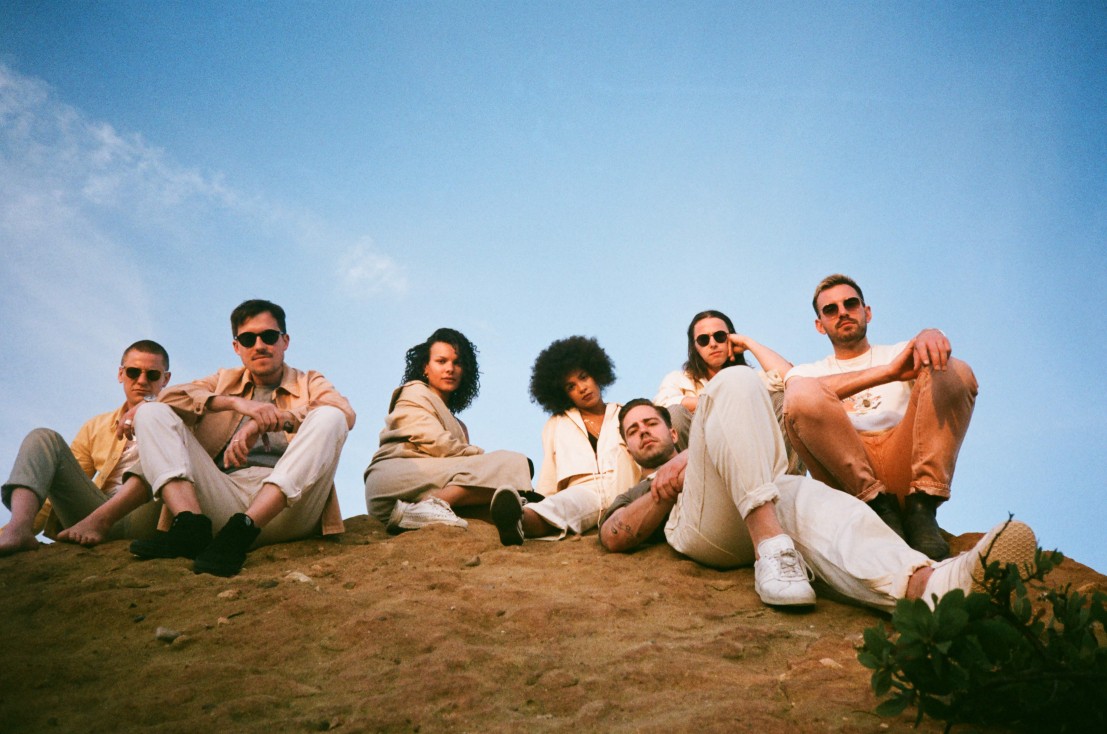 After the Lisbon trip, Jungle are back in the UK for a big show as part of Nile Rodgers’ Meltdown. How are they feeling about the upcoming show? “It’s obviously a huge honour to play somewhere like the Royal Festival Hall. I feel like it’s the modernists answer to the Royal Albert Hall, so I hold it in as high esteem as that” laughs McFarland. “And obviously to be on a bill that’s curated by someone like Nile Rodgers, who is obviously an absolute legend in everything that he does, it’s a massive honour. And it gives mum and dad a nice chance to nip down the river and watch a gig and sit in a box and have a glass of champagne.”

McFarland's never met Nile before, but Jungle have obviously been doing something right to get on the Chic man’s radar. “I’m a massive fan of his music and what you don’t realise is that Chic’s influence is everywhere and it’s under the surface as well,” he continues. “A lot of people don’t realise that these huge hits were actually written by Chic. It’s not just Chic as a performance based band. They wrote and produced some of the biggest records of the 70s and 80s. If you actually dig deep into their discography and what they’ve worked on, it’s absolutely mind-blowing.”

Talk turns to Nile’s fervent knowledge of new music and his role as Chief Creative Advisor at Abbey Road. “I think it’s great that Abbey Road are opening their doors to new artists and young artists and artists that wouldn’t necessarily have gotten the chance to go into a studio like that,” says McFarland. “I think that’s really important. Instead of it being seen as a museum, the sooner they can flip that image into a working studio and a great environment for people to come together and make music again, then that can only be a good thing.”

I tell him that for album number three, he needs to give his new mate Nile a ring and blag some free studio time. Jungle’s debut record was released in 2014, but it took four years for the follow up. Will we be waiting as long for new music this time? “Yeah, it’s definitely not gonna be that long this time. I can say that categorically, he laughs. “We’re always working on stuff. We just had three days in London in the studio working on bits and pieces. I’m not gonna make any promises, but this album’s definitely not gonna take four years to reach the people. I also think it’s just about your mindset and I think that musicians kid themselves that they have to be in their studio, in their postcode, that they know every nook and cranny of in a comfortable space to make art. I think if you challenge yourself to do things in environments you’re not comfortable and you’re not used to, then most often that’s when you make your best art, because you’re not comfortable. As soon as you’re comfortable the whole notion of art goes out the window.

“We wrote the chorus to ‘Heavy, California’ on a bus in Arizona on the way to play Coachella for the first time. It was boiling hot, like 45 degrees outside. And me and Josh were in the back lounge of the bus, sweating our tits off just trying to make some music and that’s what came out.”

Let’s hope it’s a hot one in Lisbon.