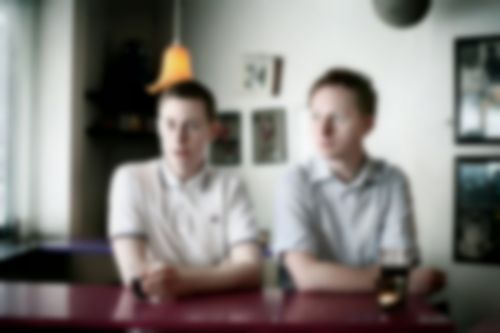 Champagne Riot is the brainchild of two Scandinavians, Caspar Bock and Anders Reuter. Recording from a damp basement in the violent concrete ghetto of Copenhagen they make electronic pop songs, which are true, necessary and straight from the heart.   Their universe is part rebellion, part romance. Part sugar, part lunacy. Part daydreaming – part nightly raids. 0% phony and 100% real. No compromises, no common sense. And no plan B.  Their debut EP entitled Moonstruck will be out late 2010. ﻿

Champagne Riot will appear at the TLOBF sponsored Ja Ja Ja Club Night, taking place this Thursday (18 November) at The Lexington, London. The event, curated by Stephen Bass of Moshi Moshi Records will also feature performances from Lára Rúnars and Niki & The Dove. More information can be found here.

For people out there that have never heard of you. Give us three reasons why they should?

Because during our set we will play at least one song that will be featured in a future Time Magazine list of “top ten songs of the last decade that will make you cry”.

Because during our set we will play at least one song that will be featured in a future Time Magazine list of “top ten songs of the last decade that will get you into a fight”.

And one song that won’t ever make any list but has a haunting melodic hook, which will be stuck in your head for the rest of the evening and even the next day when you wake up and head to the office.

Tell us a little about where you’re from. Do your surroundings affect the music that you create?

We make music from a basement studio in a half-neglected concrete complex in the Copenhagen slum ghetto. The building is part “shopping centre” – part high rise council/social living. Our studio smells of dead animals because a local pet shop has its storage room next door. We have never seen any humans go in there but can hear the birds and parrots scream their troubled hearts out day and night in between recording.

We were well raised and well educated middle class boys – and in Scandinavia, if you are born into that, you are most likely to remain there for the rest of your life as there is practically no class below and everyone will help you on your way.

Well there is a class below. And that’s where we’ve ended. For now at least. Surrounded by concrete and gang fights. Equally cursed and blessed by our obsession with making pop music.

Does this affect our sound? Well, perhaps the romance, sugar and longing in our songs comes out of an urge to escape our depressing surroundings. The growing insanity, rebellion and and nightly raids that we have experienced recently might come from being stuck there for too long already.

If you could have played on or written any song, what would it be?

Perhaps if ‘Be My Baby’ had originally been written and recorded in a collaboration between Phil Spector and Aphex Twin – that would be the kind of hypothetical song we’d have envied and wished we could have made ourselves.

How did the band come in to being? And where did the name come from?

Anders was a music journalist and aspiring music producer and Caspar was a struggling songwriter. Caspar released a solo EP as “Champagne Riot” on the American label Shelflife Records in 2008, which caught the attention of Anders. And after discussing the concept of “perfect pop music” for a while the two started working together as a full time duo in 2009. To try and realise their ideas – pursuing the vision of a future evergreen. The name has no special meaning in particular.

What is the most memorable gig you have played, and what can we expect of your live set at Ja Ja Ja?

We have been working from our studio full time and have not played live yet except for a few Swedish and Danish shows. So this will almost be a first time – and we hope it will be our most memorable to date. You can expect to hear some electronic pop songs, which are honest, necessary and straight from the heart. A look into our universe.

If you were asked to curate your own Ja Ja Ja night, which three acts would you choose and why?

(No joking! It would really in truth be the best night out ever)

We’d like you to make us a Nordic themed mix-tape. Which five tracks would you choose?