Jason Lytle could have been a postman. At least, that’s what he says. Years before Grandaddy got started, he tells me, his chosen career paths revolved around what would keep him in the great outdoors: “I had park ranger, conservation corps, firefighter…even a mailman, just because I knew I’d be able to be outside walking around.”

The Sophtware Slump, the second LP by his old band Grandaddy, was the record that – temporarily, at least – pushed Lytle indoors. A sort of concept album about the decreasing importance of the natural world in the digital age, it should have been an era-defining record; a (techno)logical development of the kind of new cosmic Americana put forth by Mercury Rev and Sparklehorse. It didn’t quite go that far (though you can arguably hear traces of its influence on Wilco’s similarly detached Yankee Hotel Foxtrot), but its cult status has been cemented with an eleventh-anniversary reissue, out this month on V2.

The album’s success propelled the band even further into a lifestyle of, as he puts it, “darting around the airports and cabs and trains and big cities, and not really having a whole lot of time to process things.” Still, hustle and bustle are necessary evils of being in a touring rock band on a major label, and Lytle’s way of dealing with it was writing ‘The Crystal Lake’. The Sophtware Slump‘s most well-known track, its narrator drily observes his new urban surroundings, before sighing in the song’s chorus that “I gotta get outta here.” Lytle eventually did, moving to Montana and working on new music at his own pace – ” I’m a little out of practice with interviews,” he admits - but as the first flush of his success dawned, he says, “I started to realise that good or bad it flew in the face of what it was that I think I was designed for.”

Interesting turn of phrase, that, bearing in mind Lytle’s most notorious creation: Jed the Humanoid, an intelligent robot buddy designed by the song’s narrator, which soon gets neglected, becoming a raging drunk whose habit eventually leads to his demise. Over a decade on, Lytle reveals that there’s a little of him in the song’s tragic story, “I used Jed as my therapy vehicle, I guess…I was attempting to approach the subject of drinking, and possibly the fact that you may perhaps drink a little bit too much.” He laughs, nervously, before explaining his motives further. “Humour has always been way up there at the top of my list of dealing with anything that could be considered serious. Sometimes you don’t wanna be smacked in the face with certain bits of reality like that.”

Lytle’s other way of dealing with reality at this time was by spending more and more time outside, a hobby since his youth, and working out his philosophy of the world on his own terms. “All the answers that I need, everything that I’m really gonna figure out exists, y’know? I find my answers working at a slower pace, and usually it’s something that involves the natural world. I can’t read it in the newspaper, and I can’t see it on the news. I kinda have to discover it myself, and in my own way – and a lot of the time that happens when I’m out and about. I think my brain is working on another level…”

I ask Lytle if he would call himself an optimist, given his despondent view of “all the outside static” that comes with modern living. He replies wholeheartedly in the affirmative. “I’m definitely an optimist. I just think that it’s getting harder and harder for people, with all the clutter and the chaos. It’s just a lot harder to hear your own inner voice these days.” He pauses, suddenly audibly aware of how uch like Bono he is beginning to sound, and laughs. “End message, because you’re in a constant state of chaos trying to figure shit out. You’re making yourself feel better in little chunks, but it’s not really permanent – it’s this ongoing game of chasing your own tail. In my mind it all adds up good.” 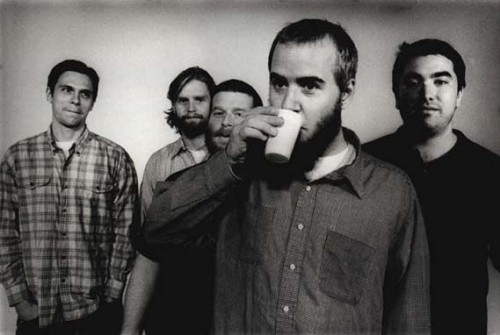 Much like its predecessor, 1998′s Under the Western Freeway, Slump was largely made by Lytle alone, and shimmers with a rich, dense sound that belies his relatively homespun approach to recording. He considers The Sophtware Slump ”a lo-fi record that’s trying to sound hi-fi,” but insists that – along with the rest of his work – it doesn’t quite live up to the sound in his head. “I’ve always wanted my albums to sound pretty grand and deep and really proper-sounding,” he says. “Something I can compare to classic albums that I grew up listening to. They all fall short on a regular basis, but goal number one was to get it to sound better than the last album.”

There’s no better example of the album’s considerable upgrade in sound than its opening track (and unlikeliest single), the nine-minute, three-part ‘He’s Simple, He’s Dumb, He’s the Pilot’. Unsurprisingly, the song didn’t have an easy genesis, coming as it did towards the end of the sessions for the album. “It was definitely a struggle to get all the three parts to actually sound like they were intended to live together,” Jason says now. “I usually get into this space where, once the album starts to come together, I start to figure out what’s missing or what needs to be added, and I realised that it really needed something like that to set it off in a certain direction. It’s just a struggle putting something like that together and making it not sound forced, y’know?”

One song that came together with far less trouble was ‘Miner at the Dial-a-View’, although Lytle claims its chorus actually first emerged on a home demo from 1989. ‘Miner’ works like a Philip K. Dick novel in miniature, as Lytle explains. “After a certain point, when the earth has been tapped of all its resources, they start mining other planets. And there’s these machines – they’re a lot like, y’know, the tabletop poker games that you find in bars now – and the idea is to add coins to it, and you can punch in the latitude and longitude of places on earth, and revisit wherever you want. And ’s actually revisiting his house, and he’s seeing the girl that he’s got back home is hanging out with some other guy, and he misses home.” Once again, though, Jason admits that the story reflects events that were going on in his life at the time – “but y’know, I found my little sci-fi spin on it, and kinda ran with it…I wish I had more inventive, revelatory ideas like that more often.”

For all his complex ideas, however, Lytle has surprisingly never tried his hand at writing prose fiction, insisting that the very act of condensing all that information into such a concise form is “probably my all-time ultimate favourite aspect of songwriting – when that thing explodes, that comes from having combined just the right words with just the right music.” Lytle claims to have “hit the nail on the head a few times”, but sadly refuses to be drawn on precisely which of his own songs he’s thinking about. He does, however, make a valiant attempt at singling out his idea of the perfect pop song, sarcastically adopting a stereotypical TV announcer voice to ask himself “What’s your favourite song of aaaaaalllll time?” before revealing his answer, “In terms of music and sentiment in the lyrics, ‘I’m Not in Love’ by 10cc. That comes pretty close.”

Lytle also comments on his experience of touring (and playing onstage) with Elliott Smith the year The Sophtware Slump was released. At this, he becomes noticeably nostalgic. “It was super cool to be hanging out on a real friendly, comfortable level with somebody that you really admired and respected for their work, and to realise that they were not only really fucking cool and super laid back, but to find out how hilarious and just what a sweet guy he was as well. In a weird way, it even makes the tragedy even more, because it’s like ‘All right, all the assholes stay fucking alive and prolong their deviant paths, while all the sweethearts…’” Like many sentences he’s uttered during the course of the interview, this one goes unfinished. Unlike the others, however, Lytle doesn’t elaborate, and I don’t push for more information.

As for what the future holds for Jason Lytle, he tells me there’s a new record in the pipeline, with potential UK dates in 2012. More pressingly, though, there’s the small matter of an appearance at a twentieth anniversary tribute festival for Pearl Jam. Pearl Jam, Jason? “I’m no fanatic,” he answers apologetically, “and bands like that tend to breed fanatics.” I tell him I can’t exactly hear traces of ‘Jeremy’ on The Sophtware Slump. “Yeah?” he questions,”Well, that’ll just be your lack of perspective.”