From drummer-turned-bedroom-producer to Australia's next DIY star-in-waiting, G Flip is doing things her own way

Georgia Flipo is defined by her steadfast grit and determination to be whoever she wants to be: from her ability to pull off wearing an odd pair of shoes - preferably crocs- wherever she goes, to making her Instagram followers fall in love with the hilarious antics of her mannequin-head-best-friend (Kelly Anne). But it's in the music of G Flip where her personality shines the brightest.

Flipo's love music came early. Around the age of three, she remembers playing with Hot Wheels cars, Lego blocks, and humming - what she now knows as - melodies to herself. The next step was dancing around the living room to her Dad’s favourite songs (The Clash and The Rolling Stones) and her Mum’s (Destiny’s Child and TLC). Not one for convention, she’d find herself singing her own melodies over the top of classics and even at a young age she thought she’d wind up singing or acting or doing something creative. But of course, things her passion and commitment really ignited with her first drum kit. “It was such an emotional experience” Flipo tells me. “I remember seeing it and wanting to cry because I was that happy. It was like seeing the key my whole life.”

G Flip was born the day she uploaded “About You” to Triple J Unearthed, but Georgia Flipo’s alter ego’s had been manifesting within her for a long time - through years of drumming, first as an amateur, then as a student, and finally touring as a professional. Working on her passion-fuelled project alone in her room - with just her laptop, kit and the occasional student- no-one was else was really listening until the hours that followed that click of a button that sent her first song out into the world.

Pitchfork named "About You" as their Best New Track (and we called it “the best debut we’ve heard in months”) and all of a sudden Australia had a new indie sweetheart. An exciting run of shows including SXSW and The Great Escape in Brighton led to a major label deal. A collection of diverse, emotion (and drum)-fuelled tracks followed, including instant live favourite “I Am Not Afraid”, co-produced by Ariel Rechtshaid.

The drums were just the start. At fourteen she asked for a keyboard on which she taught herself the basics and with a guitar always lying around the house, she picked that up too. Her first songs were, “were all about break-ups and people I was in love with that didn’t love me.” It wasn’t until she finished high school that she shared anything further than the confines of her Sony Ericsson phone’s Micro SD card. Writing an album of material for her best mates, these songs soundtracked the final week of her education, celebrating a newfound freedom - but they weren’t the heartbroken confessions of teenage angst.

At Unicersity she landed her first gig as a lead singer after ending up as the second drummer in a group performance, volunteering herself by belting out James Brown. Opening her eyes and ears to jazz, Afro-Cuban sounds and Latin rhythms - which influenced single “Killing My Time” - she also experimented with her skills as a rapper.

Flipo also found herself touring with Melbourne-based band Empra. Playing drums on the road in the US and backing their euphorically-charged, uplifting rock ballads, she began taking on backing vocals - her first taste of really singing live and a real confidence booster. “I was watching our lead singer dominate the stage and taking notes” she explains, “I think in every band I’ve played drums, but I was also watching everyone and how they moved on stage.”

At the end of 2016, Flipo recalls telling her Dad that she was done with being the drummer in other bands and she was ready to give going solo a shot. For the majority of the next year she holed herself up in her room, much to her housemates concerns, who’d occasionally see her while she grabbed her coffee and eggs for breakfast and insist she spent some time outside. From 9- 4 each day she’d work on teaching herself how to produce and in the evenings she’d stay in her room and teach other people how to play drums.

With the help of Logic X Pro YouTube tutorials and a mini bedroom studio set-up with a MIDI keyboard she wrote as much as she could. Not having the money, or wanting to compromise the vision she had for her songs, this seemed like the only way forward: “I could hear it in my brain,” she explains, “but I didn’t have the tools or skills to get it out. I [could] write a song on guitar and piano, but there’s so much more emotion and feeling you can bring out with production.”

And that’s what she did. Working tirelessly on a package of demos, Flipo threw herself into a life revolving around her bedroom. 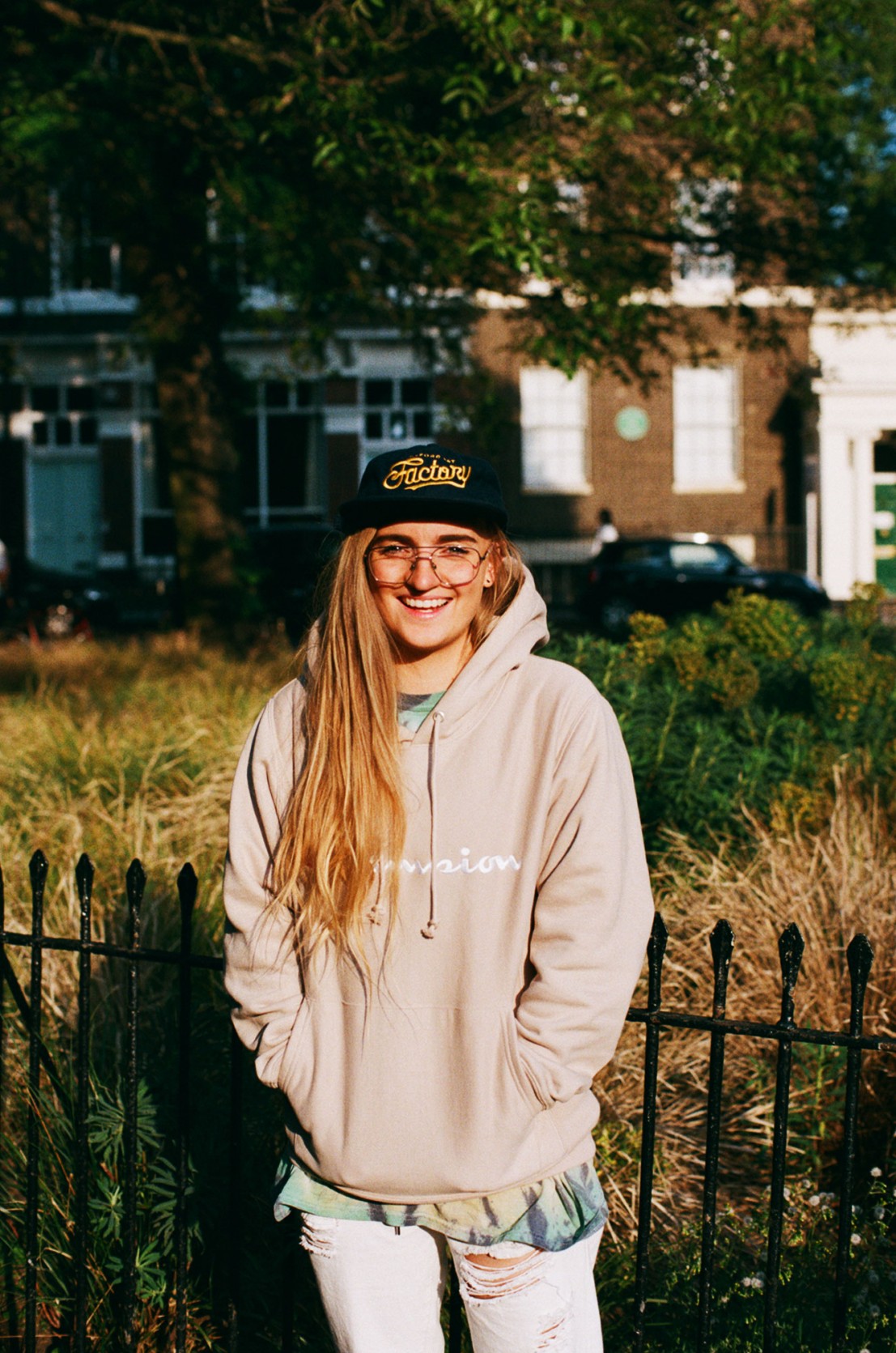 Emerging as G Flip, she had a set of songs, some of which have since been released and some which have been bunkered away and will be included on her upcoming album About Us, released later this month. She also came away from her year of isolation with a new friend, Jeromo - who she originally envisioned as a talking drum kit. Inspired by a quote reading “create the things you wish existed”, “I was thinking of so many different things: a girlfriend, a nice mac and cheese, random shit and then I thought maybe my drum kit could talk back to me” she explains. “I remember pacing around my house, for like three or four hours, no joke, walking up and down the halls, letting my brain cook this up.”

Now fully realised as an interactive drum skin that travels the world with her, Jeromo was built in two days with the help of Flipo’s sister’s ex-boyfriend Pete and a 21” circular LED screen shipped from China. It sounds kind of crazy, but for Flipo it was vital: “I thought if I want to make this a career I’ve got to do everything at 100%. I’ve been like that my whole life. I was determined to make this thing a part of me and my project and I spent a lot of time working out how the fuck the make it happen.” Not just a part of her rapturous live show, her drum kit buddy is named after her late drum teacher Jenny Rose Morris, who Flipo describes as her “main inspiration in life and in music.” She sadly passed away in 2015, and Flipo thus far had followed in her mentor’s footsteps becoming a drum teacher. This was Flipo’s way of bringing the person, who “made me fall in love with drums and made me realise I could do music for a living,'' along on this next adventure, “I remember crying when I thought of it, her spirit’s going to be in the drum and she’s going to get to travel the world with me.”

Very much into the idea of continuing to do things on her own, Flipo began attending music industry seminars as a way to figure how to launch this thing she had created. She cold-emailed management companies and other people she admired, stating the facts: “Hi, I’m Georgia Flipo, I go under G Flip. I’m a drummer turned bedroom producer. Here are my demos, if you like it, let’s work together. If you don’t, no strings.” She had few responses.

After another talk, she did her usual thing of chasing the speaker down to chat and this time she met a kindred spirit - another drummer, interested in hearing Flipo’s demos. “It was my best friend’s birthday that night and I ditched [their] birthday drinks to race home in the car to send him them” she remembers, "[and] he wanted to sign me straight away for management!” Empowered by this upturn in fortune, she emailed Australian indie label Future Classic. Georgia’s chosen contraction of her name had people expecting a rapper when they pressed play on her demos: “Dan, who’s my manager, saw [the name] and thought that I must be a rapper [but] then saw a little photo of me and Jeromo and was like 'what?!'. His story is that he booked a flight to Melbourne straight away to meet me.” 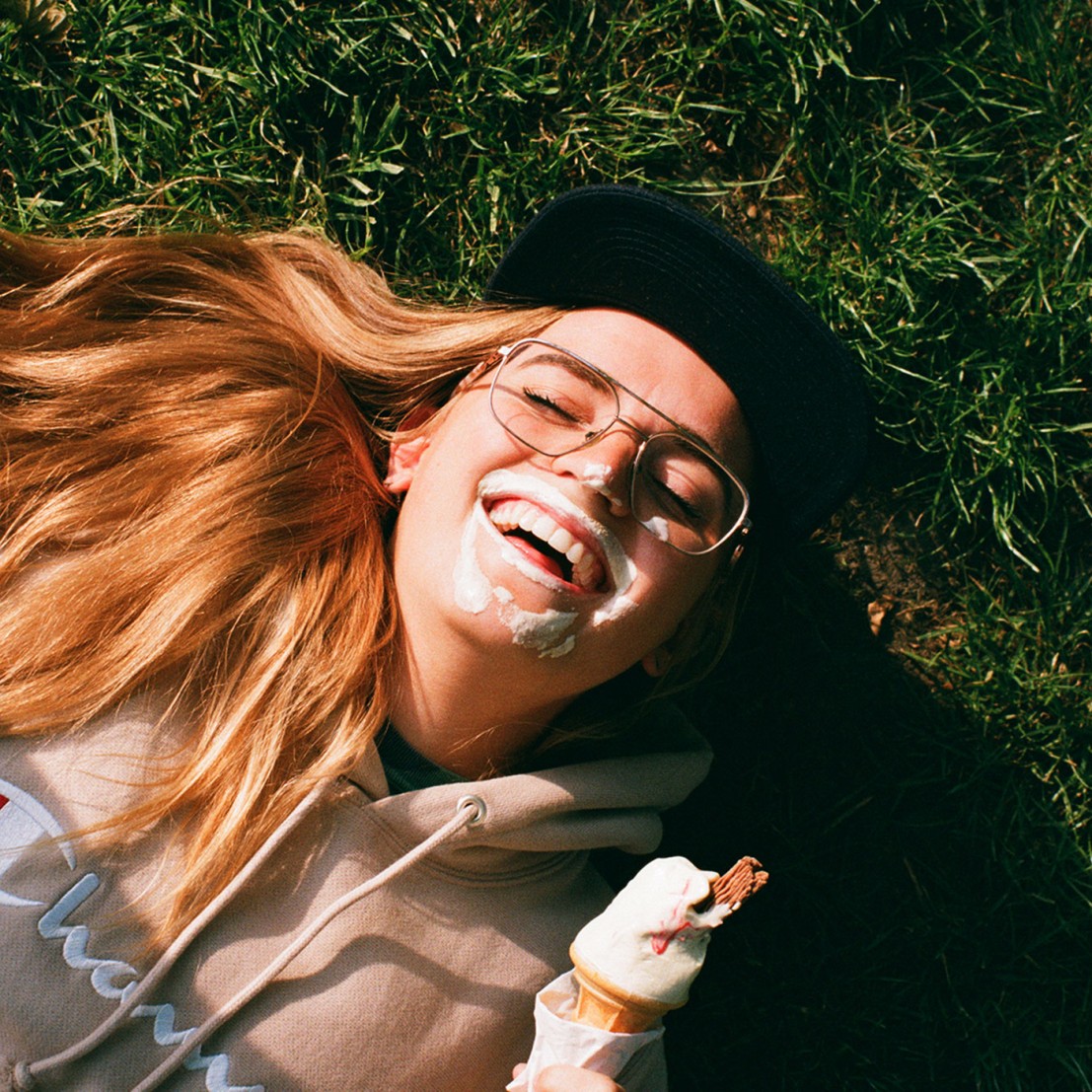 Signing with Future Classic in 2018, Flipo released “About You” and everything sort of fell into place at a frenzied pace. A chance encounter in LA led to Ariel Rechtshaid (HAIM, Sky Ferreira) wanting to work with her: “I went over, hung out at his place and his studio and we co-produced a track together,” she tells me. "He took my stems and the pieces we loved and added some of his strange things that are so unique and awesome. I’m a massive HAIM fan, so for him to even be willing to work with me or thinking the song, my melodies, my songwriting or production is dope, that was like the coolest thing ever.”

Flipo is always animated when she’s talking about her music, but she picks up the pace when she’s running off her next anecdote about working with Rechtshaid: “While I was in the studio, knock on the studio door, HAIM sisters walk in. It was one of those things that I’d imagined, like what if we’re working and all the three sisters just walk in and it fucking happened.” She maintained her cool, but inside she was screaming, “oh my fucking god, this is fucking wild.” A long time fan, her love for the band, who also have drumming at their heart is clear with her a new addition to her live show in which she performs a drum solo reminiscent of HAIM’s set closing antics.

The last year or so has seen Flipo learning even more as she played her first proper festival stage at Splendour In The Grass, dropped her first EP, and upgraded her gear, swapping out her original $300 guitar from Cash Converters which wouldn’t stay in tune for a whole song. “Our show was formed with the equipment me and my friend Toothpick had in both our bedrooms, so fixing that was big.” Going through the things which have happened and changed over the past year, she's almost seems in awe of herself: "the project is growing,” she beams.

Her sister is on board as her personal assistant and she still plays with her best mates as her band, but with a tour manager taking care of the logistical side of things. It’s a much needed addition as Flipo remembers her September tour of Australia which was, “filled with anxiety and panic attacks because there was too much on my plate.” She’s better set up now, a lot happier and is back to living her dream.

About Us is released on 30 August via Future Classic