While many museos might’ve been basking in the sun rays watching Charli XCX’s pop paradise in Primavera, some of us headed for cooler climes. Because who needs day-glow bikinis when you’ve got a sunshine yellow tent from Harold Nyborg (Scandinavia’s equivalent to B&Q) a ten pack of juice boxes and promise of meditative yoga in front of Europe’s oldest Renaissance castle.

Denmark’s Heartland Festival is set in the lush grounds of Egeskov Castle and not only boasts a global smorgasbord of musical acts but tips for foraging in their Taste fields, highbrow reflections in their Talks tent and the best burger joint in the world. No, seriously. Sadly the weather was less enthusiastic about our arrival and self-pegged Scottish saviour of chart music, Lewis Capaldi had to compete with a full torrential downpour. Devout fans stood in pound shop cagoules as he entered to the Champion League’s theme tune. Perhaps, a nod to his lightening ascension through the pop ranks in the last three years sharing the stage with equally high-praised cult figure Rag and Bone Man. That or he’s just a massive Reds fan. Either way, his set brings on intense flashbacks to Glastonbury 2017 stuck amongst a rapt audience of Sheeran fans, wafting lighters in the air. The elements are against Capaldi and so are those trite histrionics.

Thankfully, there is a glut of rising Scandinavian artists to counter the Scottish storm in a teacup. Danish indie sorts, Katinka fronted by a very heavily pregnant Katinka Bjerregaard, dish out that warrior style pop, straight out of the Nordic forests with Aurora. But besides Bjerregaard needing a little sit down at one point, she’s up and about with the best of ‘em. If anything, it provides some witty asides as she thanks everyone for letting her skip the toilet queues all weekend. Producer and songwriter Erika de Casier’s set at the newly expanded Prxjects stage is also in self-liberation and acceptance. Former single ‘Do My Thing’ channels proper Whitney trilling piano circa ‘98. It feels right and it’s OK. Rather than hinting at her influences, 23-year-old Copenhagen native Selma Judith leans straight into a cover of FKA Twigs’ “Cellophane” adding some Fantasia sprinkles on the full-standing harp while the vocals remain just as arresting. Her own catalogue keeps up the heart-rending harmonies with “another depressing song” called “I’m A Mess” but there’s electronic grace in her palpable sadness.

Gambian Swedish artist Seinabo Sey (pictured above) is taking her grief of losing her father into a proper strut with “Never Get Used To” while “Good In You” thrusts out all the empowerment of a Sex and The City movie end credits. Ironic really given, she admits the track was written about her poor performance when it comes to flirting. But it’s older gems like “Hard Times”, with its gigantic Genesis drums, and huge hit-single “Younger” (produced alongside Magnus Lidehall; Katy Perry, Madonna and Britney Spears) that has the girl-strong crowd two-stepping with their bests. Similarly empowering, retro soul sister Solange’s geometric props parade is being winched into the main Greenfield Stage. A huge inflatable moon dangles above them as six dancers in sharp suits mount the white angular structure behind her. There are St Vincent sized stage show theatrics as Solange signals the movements of her band like a pop puppeteer. From there on in, it’s all jazz bass and warm synths as “Cranes In The Sky” flies free into the 1am skies.

Speaking of giant birds, it would be remiss not to mention the enormous inflatable “swan-thing” that British illustrator and artist David Shrigley has set loose in the moat of Egeskov castle. To provide some context to the spoof floater, Shrigley is in conversation with Swedish film director and screenwriter Ruben Östlund over on Heartland’s impressive Talks stage. Both creatives are no stranger to adding a wry twist to their work, Östlund’s award-winning Force Majeure follows the marital tension after an avalanche where husband Tomas decides to save himself rather than his beloved family. Tense to say the least. But not quite as tense as the moment a man from the audience decides to boo at fellow speaker and Leaving Neverland documentary maker Dan Reed later that afternoon, as he and music critic Nanna Balslev debate whether we can still dance to Michael Jackson. (Incidentally, the original line up for this was alongside Pulitzer Prize winner Margo Jefferson who has since aired her views on the subject in The Guardian). It’s a fascinating take on the power of fame, status and the messiah complex. Headline speaker Vivienne Westwood’s keynote is a little more unwieldy with the fashion icon and punk pioneer attempting to tackle everything from climate revolution to her plans for a new democratic trust around taxes. Heartland’s champagne socialists from Copenhagen’s bridge quarters are more than receptive. Obviously. 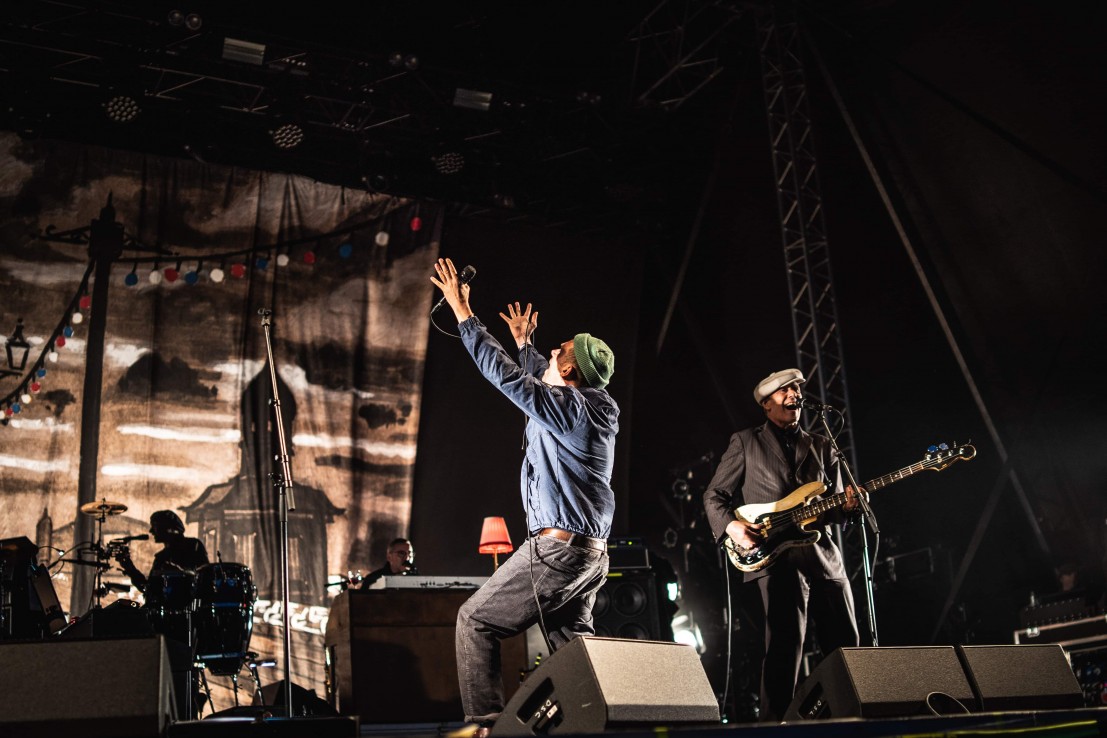 Keeping things anchored to Old Blighty, Damon Albarn’s eclectic supergroup The Good, The Bad and The Queen are set against a black and white backdrop of an old English pier. Two standing lamps emit a cosy living room glow from the amps they’re balanced upon. It’s a family apt setting for their carousel, barrel organ and a solid string quartet that we’re hoping might stick around for Smashing Pumpkins, to be honest. If you thought Blur summed up the minutiae of being British, The Good, The Bad and The Queen confront a Brexit-era Anglicana with Albarn teaching the Danes to shout “order, order” like a jolly John Bercow. Persisting on the Royals bent, Charlotte Gainsbourg soothingly sings in the Queen’s arrival on recent radio favourite, “Bombs Away”. Despite running an elegant half-an-hour late, the musician has pulled together an impressive light show which pulses like a steady heartbeat in sync with her shimmering discothèque.

Billy Corgan and co don’t hang onto the cello players from Albarn’s lot but there’s a reason for that. Behind the Smashing Pumpkins loom three enormous Russian doll type characters that could’ve sprung to life from the moon-faced spirits of Studio Ghibli. If Dan Reed was forcing us to revisit our youth for some hard truths, then Corgan takes you back to that first Stratocaster you had when you were thirteen; his guitar tonight is still decked out with little glittering star stickers. Plus, a set that spans the decades from the sunshine road trip cool of “Today” to the metal churn of “Zero”’s swirling flange. Also hellbent on proving that guitar music isn’t dead is none other than the man behind the riff most heard on the winds of the festival fields bar The Fratellis. Fresh from the announcement of new release “Help Me Stranger” (a new record of the same name is set for release this month) Jack White and Brendon Benson’s The Raconteurs spoil the crowd with a set as steady as they, or indeed, she goes. The firecracker smacks of “Salute Your Solution”’s opening chords take us straight back to the late noughties while closer “Broken Boy Soldier” is a full-colour assault of slide guitar and ride bell, strides better than any campside Seven Nation-singalong.

From Detroit garage to its Downtown scene, Danny Brown does a good job of taking us around the States for his rap swag sound. His nasal flow is the spit of Cali-hip hop troupe Cypress Hill (yep, that great) and upcoming fifth studio album, uknowhatimsayin? sees Harlem rap alumni Q-Tip chiming in on production duties. His set is just as broad, sweeping through old favourite “Side B Dope Song”, jumping to House of Pain-era “Break It (Go)” and a surprise nod to fellow festival performer Damon Albarn with a radge rendition of Gorillaz’s “Tomorrow Comes Today”. Continuing the eclectic approach, Kamasi Washington might have grown up playing jazz in LA’s storied Leimert Park neighbourhood but he’s also performed alongside Raphael Saadiq and Snoop Dogg. Naturally. His set is loose, with a bold seven-minute rendition of “Street Fighter Mas”, and sprawling numbers which deviate from the root melody into winding wig outs only to swagger back in just where they left off. There are worldly storytelling motifs akin to trans-musical visionary Beverly Glenn-Copeland alongside noisescapes that could easily sit on a Godspeed You! Black Emperor B-side. One thing’s for sure: jazz isn’t some Fast Show pastiche anymore, things have got heavy. And thank Kamasi, for that.