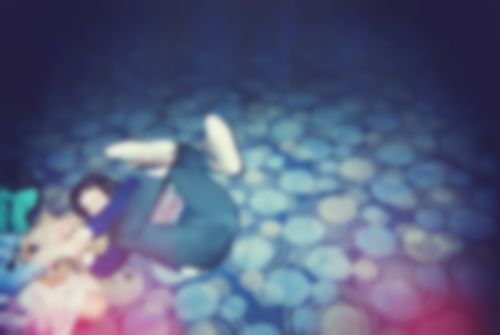 At least this time I had a bed, although I arrived in Minehead long before my ticket. I’d given a couple of Cardiff friends a lift so we went and sat in a pub while I waited for my chalet mates to arrive. The first band I wanted to see were on at 5pm. Thankfully by half four I was checked into the chalet, and drunk.

My roommate Matt and I went to watch Avi Buffalo at Centre Stage. They’re signed to Sub Pop, ridiculously young and ridiculously good. Live they were fantastic. The singer looks like he’s fifteen and has ADD, and it’s always nice to start a festival with a bit of a sing-along. Their album is out now. Get it.

Next up it was a trip to the Pavilion for Surfer Blood. Tight, confident and fun, they were sing-along two of the day. I’d put them on in Cardiff earlier this month so it was great to see them play again. Already the festival was getting busier too. Surfer Blood’s crowd was of a similar size to Iggy Pop’s the weekend before. 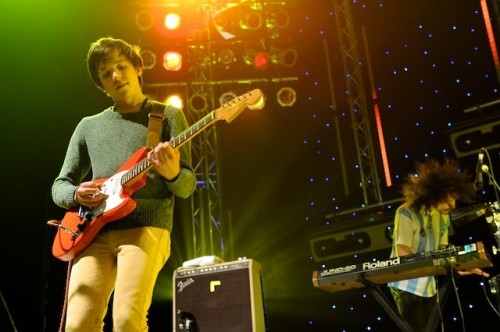 While Matt Groening’s ATP only sold around half the tickets Pavement sold out way, way in advance which made for a strange crowd. I met a lot of people over the weekend that’d taken their friend’s tickets at the last minute after year old plans had been forced to change. A lot of people weren’t bothered about watching the bands but just wanted to hang out in their respective chalets and drink, which I guess is half the fun of ATP.

By the time Surfer Blood had finished my friends from London had arrived so I stumbled round their chalet for, erm, more booze. The next band I wanted to see were The Walkmen, and I’ll be honest, mostly for ‘The Rat’. We were late getting to Centre Stage to see them but as I stepped onto the murky carpet a familiar chord rang out from the front and the crowd cheered. Apparently they’d already started playing the song before I arrived but an amp had blown and the band had had to wait for ten minutes before they could resume playing.

We got some food while Broken Social Scene were playing which was a dumb decision on my behalf because I had to keep running out the restaurant for a little dance each time they played a song I love (also, I say restaurant, I really mean chip shop). My friends later told me the veggie curry I kept describing as ‘really great’ was actually disgusting, I was just drunk every time I’d eaten it the past fortnight.

Mission of Burma were next on and were great, a large plastic shield separating Roger Miller from the kit and amps. Quasi were a little dull and then suddenly it was 1am and TIMES NEW VIKING time.

The pit for TNV was awesome; I stood further back and watched legs fly in the air and security guards crush stage divers. Later on I met up with Adam at the Crazy Horse and we went back to their chalet to shoot whisky. I don’t remember much apart from cutting Beth’s hair, wearing the hair as a moustache, and the moment where the sign language lady on the TV was mouthing the exact same words as the cassette that was playing. 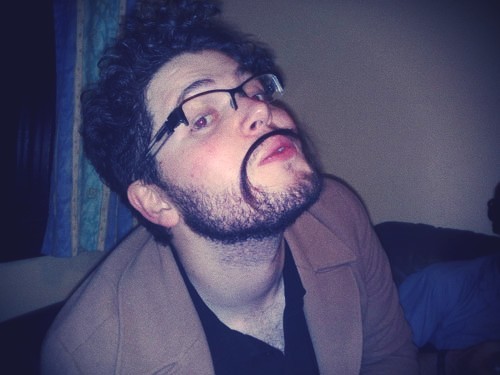 I woke up the next morning on Surfer Blood’s sofa.

They were leaving that day and said they would leave their apartment open so we could hang out there as my chalet didn’t have a kitchen or living room. I dragged myself up and headed over to Reds to see Wax Fang do the whole of Prince’s Purple Rain.

They were amazing. Dressed in full Prince gear they did the whole record from start to finish. I put them on in Cardiff a few days later and Scott told me the story of how it almost didn’t happen…

We were doing the whole Purple Rain thing and it was all last minute, we’d just been going back and forth, back and forth for two weeks with the festival ‘Yes you can do it but we don’t have any money to fly your keyboardist over’. And we’re like ‘OK, we can’t do it’. And then a friend of ours is like, ‘I’ll put up the money to fly him over’. It was a huge ordeal but we figured it out and then we got the final green light that we could do the show on the Wednesday before the weekend.

So then they were gonna fly him out on Thursday and get in on Friday. Thursday morning they go to get the keyboard weighed and it’s too heavy or doesn’t fit the dimensional requirements for the plane flight over, so he couldn’t take his keyboard and it had all the saved presets and everything on it.

So we got this news on Thursday when we were playing Great Escape in Brighton and coincidentally Brian Eno has a guest installation at one of the houses up there, like an audio installation, it’s pretty cool and we’re all, of course, huge Eno fans. So I was in the van sleeping but everyone else was at this exhibit and they’re all talking like ‘Oh my God, we have to find this keyboard in twelve hours’. And we were trying to find the exact same keyboard so he could export his settings, his midi settings, or just re-programme the keyboard.

So they were talking about it at the exhibit and one of the guys working the exhibit had overheard them so he comes up ‘I hear you guys are looking for a keyboard?’ or whatever. So he calls Brian Eno like, ‘Brian, there’s a rock band from America here and they need a keyboard, this is probably right up your alley’. So Brian Eno actually makes a few phone calls on our behalf and he arranges for us to be able to buy one from a shop there in Brighton, use it, and return it for a rental fee. Like, they ordinarily do not rent out gear. So we had Brian Eno working for us for five minutes.

Amazing. After Purple Rain I was sick and took a nap. Not so amazing. I got up in time for Fiery Furnaces who were just the right mix of mangled guitar and broken up beats to remind me of just how awful I felt. Still, I’d forgotten how much I love their records. Later I bumped into my friend Iain from Stricken City and we spent a good while singing ‘When I was single, my pockets did jingle’. I love that EP (EP? Album? Who cares, it’s ace). 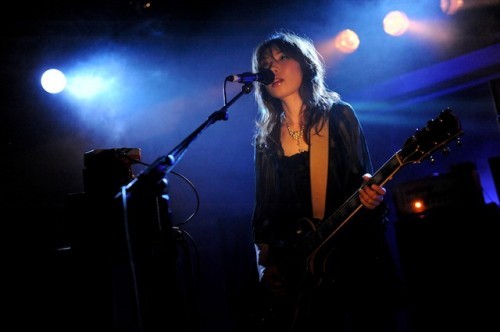 I managed to start drinking again at Boris who were THE LOUDEST BAND OF THE WEEKEND, easily. And suddenly it was time for Pavement. I went with my friend David who’s a bit older than me. He spent most of the set reminiscing about how ‘Never did the 14 year old me imagine I would be here right now’. It was so annoying I threatened to pour beer on his trousers so he looked like he’d wet himself if he didn’t shut up.

They opened with ‘Box Elder’, and if memory serves, ended on ‘Starlings of the Slipstream’ (last week’s plan to bring a notebook with me never really transpired).

I think the best thing about watching Pavement is it’s not very often now that there’s band who’s records you’ve owned and listened to for such a long time without seeing them play. I’d never seen Pavement live, and realising that everyone else punches their hands in the air and screams ‘No big hair!’ exactly like you do was a pretty great feeling.

After taking a moment to calm down, David and I went to Reds to watch Venom P Stinger. I guess everyone else had gone for food/post-Pavement drinks as there were only about thirty people in the room. And then the guy stood to my left turned round. FUCK. It was Mark Ibold. I looked up at the tallish man directly in front of me. I noticed the tuck of flannel shirt sticking out from under his jacket. Stephen Malkmus.

I didn’t know what to do. I didn’t want to disturb him during the band, and what do you say to a guy like that? I’d already embarrassed myself trying to talk to Thurston Moore at SXSW, and then I noticed, Stephen’s label was sticking out.

I considered tucking it back in, like to try and be cute or something. I stood behind him for half an hour trying to work up the courage to tuck his label in. I failed and went to watch Faust.

Faust had a fucking chainsaw. It was awesome. A FUCKING CHAINSAW! With sparks and shit. Atlas Sound was really dull in comparison. I stayed to watch him as I love Deerhunter and have seen Monotonix a million times before. All my friends went to the Monotonix show and said it got shut down after two songs.

I got a massage while Still Flyin were playing which was beyond awesome. It was so good. If you’re at either of the Xmas ATPs just get one. They’re only £5/£10 and totally amazing. 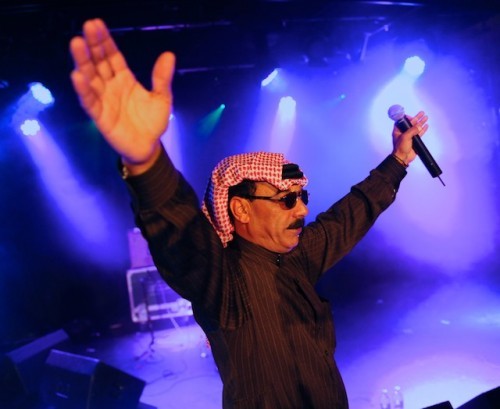 Although not as amazing as Omar Souleyman. The problem with Pavement ATP was the line up. There were so many guitar bands it got a bit much after a while. Omar is from Syria. Apparently he’s made something ridiculous like 500 albums in his career. I’m not even sure how to describe his music; it’s like mash up electro bhangra. His show was the highlight of the weekend (apart from Pavement, obvs). Everyone went insane; crowd surfers, manic dancing, stage divers. Amazing. I don’t think I could listen to him at home though.

Later that night I went to the Crazy Horse and me and Neil from Los Camp! started the most awesome dance-off ever. There were like, 50 people in a circle passing a hat and showing off some stellar moves. Then I went to some lame chalet party where they were blasting really annoying funk and soul. We left and found an abandoned chalet and passed out in the beds until my friend Helen got scared that the cleaning lady was going to cut our wristbands off and forced us to leave.

Sunday was kind of boring. Wax Fang were great but then I just went and got pizza with the boys from my chalet. The Clean were good and The Fall were alright. I’d never seen them live before but my friends who had said they’d seen them play better. Apparently Mark E. Smith came back on for a second encore after everyone had gone, leaving fans running back across the Pavilion. I missed that. I was already watching The Raincoats.

The Raincoats played pretty much the same set as the weekend before. They even told the exact same joke. Something about a pessimist and an optimist. Whatever. It wasn’t funny last week either. The funniest thing about this ATP was the male to female ratio. It was a total sausage fest. Guys had to queue to use the toilet. It was brilliant.

After The Raincoats, Endless Boogie got a bit boring and I nearly fell asleep during Grails, which isn’t so much a criticism of the band, more a reflection upon my own lameness.

I went to bed at 2am. I just couldn’t face the next morning’s vomit inducing gear changes that result from staying up boozing. ATP had broken me. I need until Christmas to recover.