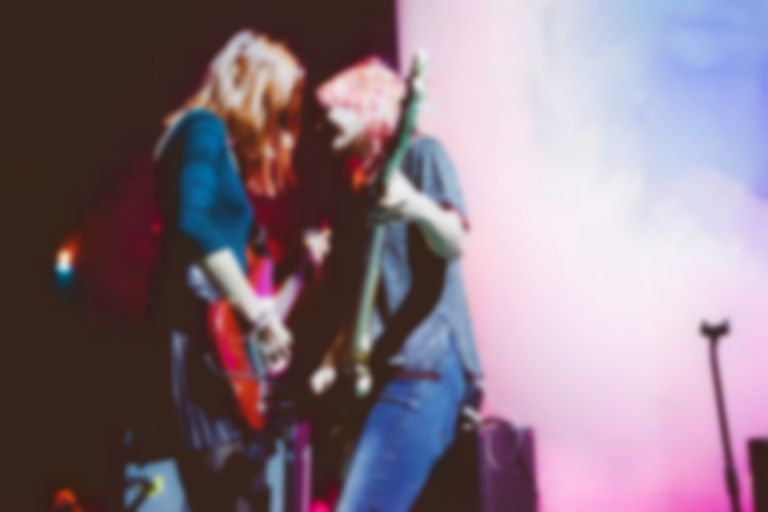 I’ll get it out of the way: I’m a massive Warpaint fan. I’ve followed them since their debut UK tour for the brilliant Exquisite Corpse EP and have continued to seek them out at any given opportunity. Honestly, seeing them live for the first time at Scala was otherworldly and, since then, Warpaint have continued to build, develop and continually explore their sound through three very different albums. Debut album The Fool was ethereal yet energetic, their self-titled second more affected by electronic influences and their third offering - 2016’s Heads Up - was an amalgamation of the two. Warpaint were warmly welcomed to Somerset House for its Summer Series tonight, and they brought grace and gravitas.

Stepping into the courtyard of Somerset House you’re taken away from the busy riverside streets and instantly transported into a small stone-paved festival. YAK opened the show, and althought their set demanded attention, the audience remained unfairly nonchalant.

Somerset House is not a natural music venue, yet the grandeur of the courtyard is astounding and, paired with Warpaint’s swathes of sounds, the effect was overwhelming. Opening with recent album title-track "Heads Up", and segueing into early cut "Krimson", the band effortlessly weaved between the nuances of their back catalogue. Any uncertainty shown earlier by a shy, very British, audience was wiped away instantly by Theresa Wayman’s chords at the start of "Undertow". Despite varying styles, Warpaint have created a signature sound that is deeply embedded within each track and, through repeated riffs and swift diversions, we were given an interlocking and a highly detailed set.

Appearing effortlessly cool, this 17-song set could be split into three distinct sections: a distorted beginning, an experimental middle and a meaty, dance driven end. With three full length albums under their belt, it would have been easy to simply play the hits; however, newer songs from Heads Up held their ground. "Above Control" provided a calming break, "So Good" positively pulsed and "Dre"’s sample-lead synthetic beats eased the crowd into its dancey finish. I’d seen Warpaint only a few months before and - potentially due to their much poppier arrangements - their newer songs didn’t quite sit right. However, tonight an expertly arranged rhythm section gave solid foundation to wandering guitar parts and, further to this, sparser songs were given greater clarity through powerful three-part harmonies.

The real joy in seeing Warpaint live is to witness their incredible onstage chemistry; they ricochet around stage but allow each other to shine through spotlight songs. Undeniably, they are at their most authoritative with their talents combined and brilliant closing track "Disco//Very" was a collective battle cry. Warpaint’s material has stood the test of time and - with the addition of newer songs - the remain exciting and fresh. Through years of touring they have worked hard to hone in the craft and tonight’s set at Somerset House was its flawless realisation.