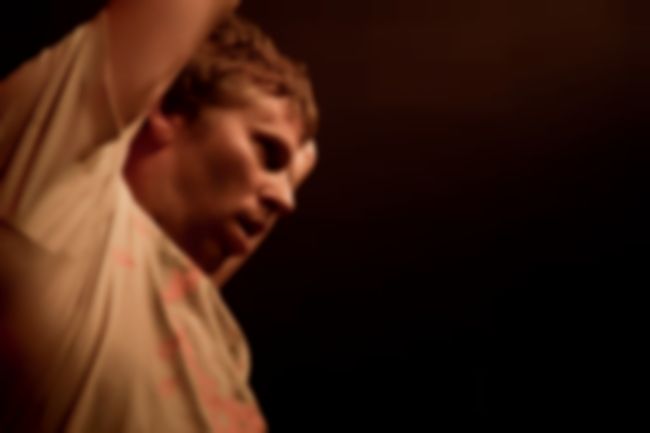 In many ways, the three punctuation marks that comprise the moniker of this Sacremento six-piece are a statement of intent, for !!! (pronounced “Chk Chk Chk”) aren’t a band that care much for subtlety.

Exiling themselves to a log cabin, penning delicately crafted ballads about love and loss is certainly not part of their M.O., nor is jettisoning their live band for deep aerobics and diatribes on gender theory. Their sole aim is to make people dance as hard as possible, and in this noble mission they almost succeed, in spite of a sound mix as muggy as the venue on this warm Spring evening.

The core of the !!! live experience is indubitably Nic Offer and his frankly ridiculous dancing. That’s not to diminish the achievements of the rest of the band, who deliver funk-driven basslines and insanely tight percussion with commendable elan, but it’s his gurning, flailing presence that gives the show its infectious personality. He is by no means a suave dude. His alarming, unpredictable gyrations would, under non-gig circumstances, be banned by law, if not by international treaty. But it’s all so enthusiastic, it’s hard not to get caught up in a strange, and potentially ill-advised desire to emulate his uniquely mesmerising shapes.

It’s just a shame the music itself isn’t always as compelling as Offer’s moves are. Their filler/killer ratio has always been slightly out of whack, with too many songs falling into the “workmanlike” category, and tonight’s muffled low end did them no favours. But when they unleash the slick, Daft Punk-worthy space-funk of ‘One Girl /One Boy’ or the filthy, disco-punk brilliance of ‘Yadnus,’ it’s easy to see why they’ve garnered such a cult following. In all, it’s too uneven to be considered a classic performance, but at their best, !!! truly merit all three of their exclamation marks.