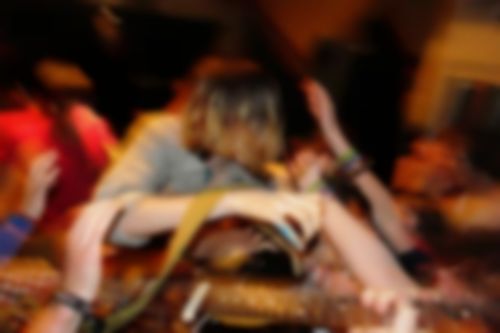 It’s a filthy night in Cambridge – wind is howling, rain is battering and the Portland Arms is packed. This is how it should be – get out of the Autumnal weather by witnessing some music and sinking a few ales. Much better than trying to do anything else.

That, at least, seems to be the approach of the crowd who have turned up early to witness the locals, in this case the scream-core of Maths. Flirting with the rock genre that bears their name, this quartet are mainly straight-down-the-line thrash. Their set is a sweaty, adrenaline fuelled rush. Those still dealing with hangovers from the night before cowardly wait outside. This isn’t going to do much for a bad head, and I’m glad I’ve brought my ear plugs, but there’s definitely something more than sheer noise at work here. There’s some classy and striking riffs that cut through this barrage of noise. As the band, pretty much, perform with their back to the crowd, it’s the only forward facing member you focus on; the drummer. And what a drummer. Looking as if he’d struggle to get served at the bar, his focus and determination at the kit is amazing. It’s his driving rhythm that keeps Maths together, ensuring they don’t disappear into a hole of feedback. In fact, their vocalist is mainly reduced to random howls and cries tonight as he struggles to be heard over their epic sound.

After that whirlwind, it’s time for something a little more relaxed. Tall Ships, BSM’s latest impressive signing, could lazily be compared to their Oxford contemporaries Foals, but that would do both bands a disservice. Tall Ships are more interesting. Sure, the trio are still a little raw around the edges and could perhaps do with a little more stage character, but it’s the music that speaks for them this evening. Math-pop seems an easy genre to slide them into. Their set-up might echo the Fuck Buttons face off in front of their drums, but they’re not as noisy or as Club influenced as them. This is delicate streams of sound, slowly and carefully pieced together whilst their vocals whisper lyrics about tectonic plates and chemistry. This is clever pop that’s not afraid of its intelligence, an all too rare an occurrence these days. As with all good things, it was over far too quickly and tonight’s promoter can be heard singing their praises high and wide – I expect them back in Cambridge soon…

The tiny back room of The Portland Arms was rammed and fit to burst for Tubelord. This was my first chance to catch these guys live, a band who have had more line-up changes than Wilco. In fact, tonight, they’d welcomed a new vocalist for this tour as regular crooner / guitarist Joseph Prendergast was struggling. Which might have contributed to my disappointment of their set. Playing jilted pop from the same stable as Los Campesinos! or Danananakroyd, it was perfectly accomplished noise pop but without the originality. Having seen both the previous bands at their peak (the latter in the same very room as tonight’s gig), there was a spark missing from Tubelord’s performance. I can predict each cry, each riff, each key change. It was perfectly accomplished, but lacked that certain something. These guys have been touring for a while… Time for a break perhaps?