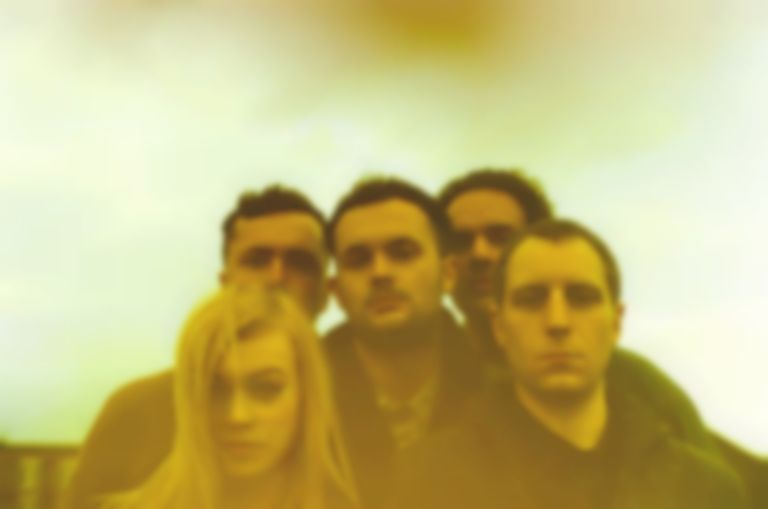 Anyone who has watched Alexander Ingham-Brooke’s mesmerising video for Torches’ ‘Sky Blue & Ivory’ could be forgiven for being slightly underwhelmed by the first few songs at their single launch party. Playing to a packed out basement below east London’s painfully popular Sebright Arms, the hugely hyped five-piece don’t quite hit their stride until the fourth or fifth song. However, it’s at this point that the intense drumming, neon uplighting and lungbusting baritones of lead singer Charlie Drinkwater suddenly come together, and how. As they move on to ‘Someone Needs A Ritual’, an industrial indie disco stomp, the crowd are thoroughly seduced by the beat, which competes with Drinkwater’s voice for the full attention of the audience.

Despite keenly focusing his gaze on his drum machine Ed Kelland is as much a centre of attention visually as the more outlandish frontman, who treads a fine tightrope between being immersed in his music and overacting. The fusion of the excellent drumming (Kelland is supported by Stephanie Anderson who plays a traditional drum kit) and bass is superb, with the instrumentals dominating, taking some of the glory away of the vocals.

There are hints of Yeah Yeah Yeahs ‘Maps’ in Alex Sprogis’ rattling guitars and a touch of Modest Mouse in one of the tunes, and of course Drinkwater’s booming voice lends itself well to Ian Curtis comparisons. It’s an interesting mix. Finale track and showcase single ‘Sky Blue & Ivory’ is what sets Torches apart – both on and off stage. It establishes them firmly as a band with a voice of their own. And, while this performance lacks some of the vocal punch that its recorded version boasts it’s still a fine effort and a fitting peak for the crescendo that has been their live show. We’ll be seeing more of Torches, no doubt, and that is definitely an exciting prospect.