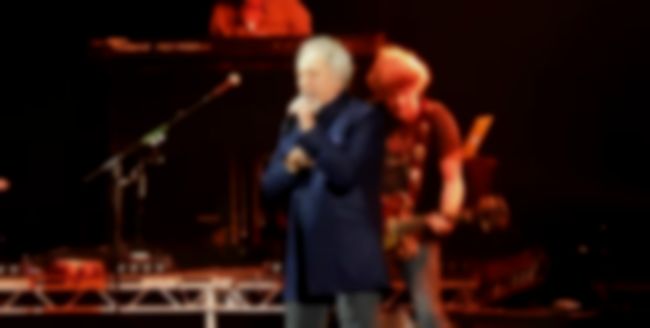 The doors are early. At 6.30pm, I’m normally finishing up the day’s work and arranging to go for a drink before we head to the venue in a couple of hours’ time. Tonight’s different though, different crowd, different part of town. Tonight there will be no support act. Tonight, Sir Tom Jones plays a headline London show, so I find myself on a (very) early evening tube with a lot of people in their 50s and 60s, heading west to review the show. And tonight, I have an assistant. Accompanying me is my mum Denise, who will be providing tonight’s commentary from the perspective of a 55 year old fan, to somewhat balance out the cynical opinion of myself, a 25 year old music critic. She’s well qualified, her last major concert was the Foo Fighters back in 2001, and since then she’s been to a few local hardcore shows in support of her drummer son. And she watched every episode of The Voice.

The venue this evening is the Hammersmith Apollo, a 1930s theatre that I’ve only once before visited, around 15 years ago to see Phillip Schofield perform in Dr. Doolittle, complete with animatronics. That was a great day, so we’re hoping tonight will shape up to be of a similar standard. Hammersmith Apollo, or Hammersmith Odeon as both my co-reviewer and Sir Tom would refer to it throughout the night, is a 3’600 seat concert hall. “It could do with a lick of paint,” Denise comments of the tatty walls and threadbare seats upon arriving, but there’s something quite poetic about seeing Tom Jones, a man whose career is enjoying a form of renaissance, in a venue which, recently inducted into that soulless chain of concert venues now referred to as the HMV ‘whatever’, has also been given a second chance. For all of its weariness though, there’s no debate that this is a venue steeped in history, from that historic Blondie performance of 1980, to a fracas after a Public Enemy show leading the venue to ban rap music performances for the next few years.

Tonight shall be no ordinary Tom Jones concert. Denise has been forewarned of the fact that this show is part of 2012’s Blues Fest, a series of events which has brought the likes of Van Morrison, George Benson and Ronnie Wood back to the London stage. As such, we’re prepared for the fact that this might not be a concert of hits, pray as I may that the opening notes of tonight’s performance will be the intro to ‘You Can Leave Your Hat On’.

As suspected, they’re not. The show this evening will be an altogether more sombre affair, as Sir Tom explains in his opening address to the crowd. “This is a blues festival. So we’re going to play some blues!” And so they do, kicking off proceedings with a cover of Blind Willie Johnson’s ‘Soul of a Man’. Working his way through tracks from new record Spirit In The Room as well as 2010’s Praise and Blame and a few favourite covers, Jones’ voice is phenomenal – deeper, more rich and more powerful than ever before. “What a voice, no-one’s got a voice like Tom Jones,” says co-commentator Denise. In fact, the whole performance is note perfect, aside from a fairly laboured duet with ‘up and coming popster’ Josh Osho (“No, wasn’t keen on that” – Denise) and the charming part where the 72 year old Jones forgets the opening words to Paul McCartney’s ‘(I Want To) Come Home’ and requires his son to come on stage for a swift prompt. There’s a warmth and palpable passion about the performance, a collection of Tom Jones’ favourite songs from his preferred genres of blues and soul, and although Jones is clearly enjoying the vocal theatrics that these tracks inspire, as well as appreciating the remarkable musicianship demonstrated by his band, the crowd’s reaction is pretty flat. And Sir Tom has noticed.

“What he understands better than a lot of young performers do, is that the people here want to hear his older songs,” Denise remarks of the crowd’s reaction. “Even if it’s a blues thing, we want to hear the bigger songs that we’ve all grown up with.” But it’s not until a good 15 songs into the set that the audience is really set alight, when Sir Tom sends his two guitarists to the front of the stage to sing the opening phrases of that ol’ Jones classic, ‘Green, Green Grass of Home.’ Up until this point, the crowd’s reaction hasn’t been cold, it’s been appreciative… but tepid. This song, however, triggers the rapturous applause and feverish adoration that Tom Jones concerts are so well known for. As honest, meaningful and rich as the blues tracks may have been, there’s no doubting what most of the people in the room are here for, and that’s to hear the hits.

I personally am a much bigger fan of the blues numbers than my co-reviewer tonight, and I embrace Jones’ impeccable croon as he rounds the set off with Leonard Cohen’s ‘Tower of Song’, as well as ‘Evil’, the Howlin’ Wolf cover that Jones recorded and released with Jack White earlier this year.

Leaving the stage for a few minutes, Jones soon returns to commence the encore. As the opening notes of ‘Delilah’ fill the room, the crowd is finally given the long-awaited opportunity to go mad. And they do. A delighted atmosphere spills over into the final song of the evening, Tom Jones’ renowned cover of Prince’s ‘Kiss’ accompanied by a chorus of squealing 50 year old women. It’s as though a tension has been eased in the room, as the crowd hear what they came to hear, and Sir Tom is able to give his adoring audience what they want.

(Fortunately) no knickers were lost in tonight’s proceedings, and I count myself as one of the crowd members who very much enjoyed the opportunity to see a star that has been so boxed in by his success given the opportunity to spread his wings a bit. Denise would’ve rather heard a few more of the big tunes. And she didn’t like it when it went a bit jazzy, but her overall verdict? “He’s still got it.” Can’t argue with that.