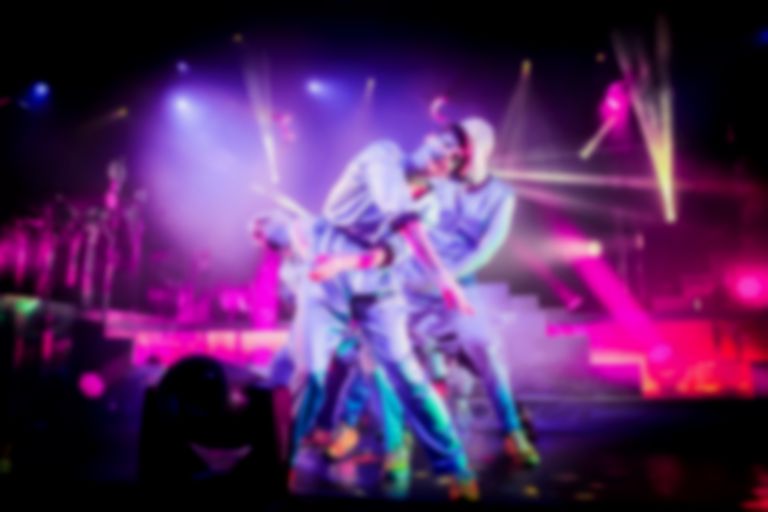 The Club Silencio scene in David Lynch’s Hollywood nightmare Mulholland Drive features the line, “The song a tape-recording…no hay banda…but yet we hear a band”.  With instruments absent in certain parts of the show and The Knife - now expanded to a 10-piece troupe of performers (including Olof Dreijer and Karen Dreijer Andersson, Light Asylum’s Shannon Funchess and the collective Sorkklubben) – dancing to pre-recorded backing tracks, there is an undoubtable air of Club Silencio within Brixton Academy as The Knife perform their penultimate show ever. And although not as Lynchian as the initial presentation of the Shaking The Habitual show in 2013, this was not some cheap cabaret act presented to us but an unforgettable spectacle and bold statement about how electronic music is or more vitally can be presented in this current day and age.

Maligned for its use of backing track and interpretive dance, rather than so-called “live performance”, the original Shaking The Habitual tour performed in 2013 proved to be the most divisive point of the Swedish duo’s critically acclaimed career. This subsequent presentation (now named The Shaken Up Show) of the vision set out by The Knife with Shaking the Habitual, sees the band partake in uncharacteristic compromise, without however losing the core principles and motifs initially explored in 2013 on record and live in performance. The compromise The Knife do agree to is the performance of more “live music”. Karen Dreijer Andersson sings live vocals on the majority of songs performed, and with the addition of Shannon Funchess, the two add alien beauty and forceful bite to the pulsating beats and rhythms on display. Performers from Sorkklubben also provide percussion, backing vocals and bow, what looks like, a modified, elongated and electrified Zither. Olof Dreijer also participated in the traditional playing of instrumentation, adding acoustic drum fills and cymbals to “Raging Lung” and expertly navigated a series of electronic drum pads on set opener “Wrap Your Arms Around Me”.

While The Knife do engage in minor compromise with the audience in terms of performance, the statement and the concept of the Shaken Up Show is still ambitious and uncompromising in nature. A radical overhaul of the show would have seen The Knife pandering to pre-conceptions of how The Knife, or any artist in general, should perform and the Shaken Up Show is still, for the vast majority, performed on their terms. The additional live vocals on several tracks does not take away the challenge lain out in front of the audience – whether the listener/audience can give up their presumptions of how an artist should perform and what an artist should perform. Instead of the sibling duo using samplers and electronic trickery to bring their back catalogue to life, The Knife toy with pre-conception and dissolve the concepts of “live performance”. Following an excellent handclap-led live rendition of “We Share Our Mothers Health”, “Bird” seemingly follows suit with the band drumming on a plethora of props and instruments. But on closer inspection, it is not Karen Dreijer Andersson singing and in a blink of an eye the veil of live performance is lifted to reveal the entire collective miming over the pre-recorded shaken-up version of the track. What then follows is a pre-recorded mid-section - which featured lip syncing and dynamic dance routines (that ranged from the traditional to energetic jump-style) to the likes of “Bird”, “One Hit”, “Tooth For an Eye” and “Without You My Life Would Be Boring”- that proved to be the most conceptually challenging and most rewarding passage for audience and performer. “One Hit” especially had much of the front section bouncing to the “ho ho hos” of the chorus.

In that single moment within “Bird” The Knife began a process where we as an audience began to challenge how live music, and especially electronic music is performed. And with the set dissolving further into mime and interpretive dance, it would be easy to disregard the show as meaningless post-modernism. But in reality we should delight at what we have been given with its ingenious attack on modern performance. Honestly, what is the difference (in terms of “live performance”) between the performance of The Knife, which revels in its use of backing track, and that of bedroom producers triggering a sample every now and again from an AKAI pad.  If anything this is more vibrant and exhilarating than an artist partially hidden by a laptop.

The show itself is still inherently a disorientating and dizzying experience that thematically shares and follows on many of the motifs originally approached on Shaking the Habitual. First of all, the blend of live instrumentation and live vocals with mime leaves one continuously questioning who is truly doing what on stage and then later doubting original convictions on whether certain elements were pre-recorded or triggered on stage. Secondly, the siblings are skillfully hidden at times. Set opener “Wrap Your Arms Around Me” saw a member of Sorkklubben take centre stage with snare drum attached to waist to mime the sharp snare shots, averting attention from Olof Dreijer hidden behind a custom, electronic/acoustic drum set. Other performers also took to a series of microphones during the track, making it hard at first to decipher whom and where the real Karen Dreijer Andersson is. Not only was this bewildering but highlighted a conceptual element to the show, where The Knife are devoid of fixed form and gender. “Bird” saw male members of Sorkklubben mime the lead vocal and throughout the show itself there was never a discernible front person, but several members of Sorkklubben and Shannon Funchess (notably never Karen or Olof) taking the lead to address and thank the crowd.

This in part also ties in with the much talked of gender politics and queer theory that wove itself through the fabric of Shaking the Habitual and those motifs were particularly expressed though their chosen medium of interpretive dance and colourful gender-neutral jumpsuits. The poignancy of “Pass This On”, even though now set to a house beat, was beautifully realised in its visual representation of men dancing intimately with men and women likewise. Funchess’ opening vocal on “Pass This On” also saw a subtle transformation of the song’s female narrative, with “I’m in love with your brother” shifted to “I’m in love with your sister” further illuminating The Knife’s conceptual ambitions with the show.

The relationship between artist and audience is also examined within the Shaken Up Show. While Shaking the Habitual challenged social hierarchy within patriarchal states and capitalist societies, the Shaken Up Show challenged the hierarchy between artist and audience. The emphasis of the Shaken Up Show was that it was to be a shared experience, one where the audience is actively engaged and not entirely passive. And during the 90-minute show, the fourth wall between audience and collective was continuously breached. The D.E.E.P. (Death Electro Emo Protest) aerobics that opened the show set the tone for this with the entirety of Brixton Academy chanting bizarre slogans such as, “Hey elbow, what’s up?” while “We Share Our Mothers Health” saw the crowd providing loud, backing handclaps. But most strikingly was the dynamic shift in lighting within set closer “Silent Shout”. Kaleidoscopic light silhouetted and framed the collective in a way that felt as if they had joined the audience. They were no longer the artists we were watching, but members of “[our] favourite club” (as Funchess put it), dancing with us, as those undulating arpeggios played out over the Brixton Academy sound system one last time.

What has arguably been lost in much of the conversation surrounding these shows are the actual ‘re-worked’ songs themselves. In the most part, the music "performed" at the Shaken Up Show allowed for joyous, socialist celebration, making the show, with its lyrical and thematic content, one part rave, and one part conceptual/neo-political juggernaut.  “Bird” for example was almost unrecognisable to the blissed-out original found on The Knife’s eponymous debut. The 8-bit drums and West-coast guitar lines were replaced with frantic Samba percussion and piercing synths, bringing a carnival spirit to Brixton Academy with much of the audience throwing their arms into the air with delight, as the band revealed their grand illusion of not actually playing their instruments. “Without You My Life Would Be Boring” continued the carnival atmosphere with an eruption of noise and arms as a throbbing four-to-the-floor underpinned duelling percussion rhythms and woodwind drones. “Stay Out Here”, subtly modified with a darker, more threatening, shape shifting looped bassline, tore through the Academy, before segueing into “Silent Shout”. With the addition of the hook from Corona’s “Rhythm of the Night” (playfully transformed into “the rhythm of the Knife” by Funchess), The Knife duly provided a monstrous and euphoric climax to the show.

The joy, which exuded throughout the show, did also give way to a moment of spine-tingling and beautiful desolation with “Ready To Lose”. Preceded by a reading of Jess Arnets’ poem “Collective Body Possum”, which engaged in the thematic and conceptual elements of Shaking The Habitual, industrial drums and an astonishing solo vocal from Karen Dreijer Andersson elevated “Ready to Lose” to one of the standout moments from the set. Complementing the angry and highly political lyrical content of the track, the live reworking is a perfect example of how tracks in a live setting can be reworked, re-invigorated and re-born. If there was a criticism to be made it would that while as memorable “Ready To Lose” was, its position within the set was slightly jarring and highlighted by the immediate return to the heavier, house 4/4 of “Pass This On (Shaken Up Version)”.

Admittedly the show may still not to be to everybody’s taste and there will still be detractors of the chosen medium. But on examination of an extremely sweaty Brixton Academy, there were many lost in the brilliance of the music, the lights and the performance on a whole. Regardless of whether the tracks are studio recordings, live pre-recordings or performed live at the concert, this may well be the ideal way to experience The Knife live. Their defining pitch-shifted vocals and abstract melodies and rhythms were never really designed with the purpose of being played live. But with tracks like “Full of Fire” played loud with angry, red strobe lighting, The Knife faithfully shared their music in a communal, celebratory manner. These shows could have easily seen the duo follow a similar arrangement to the Silent Shout tour in 2006, where Olof would trigger off a variety of samples and Karen would provide vocals, but instead they presented a memorable experience for all to behold, while challenging core fundaments of performance. At Brixton they said goodbye to the UK one last time with their legacy untarnished - always pioneering and always shaking the habitual.