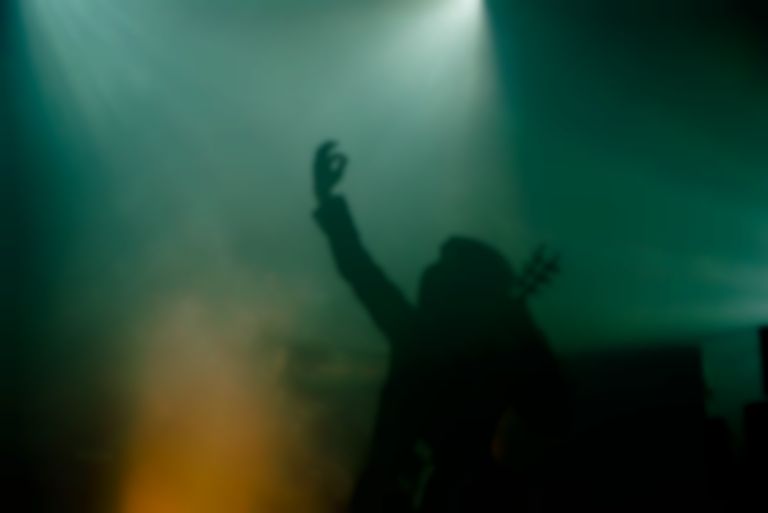 Sunn O))) are famed for their singularly searing noise; as notable for its sheer volume as it is for the doom laden drone of the sound itself.

Tonight (21 March), as usual, they play in front of a foreboding horseshoe of massive, massive cabinets. You can feel the vibrations rippling through the back of your Barbican concert hall seat throughout. The guttural low tones of the tuned-down guitars hang in the air with an actual weight.

It is hard to fortify yourself for sound like this. There is nothing like it. It is simultaneously bludgeoning and blissful.

Tonight, the stage show pushes the already hypnotic sound into a show that touches the transcendental. Another hallmark of the band is their flair for the theatric. The band members dress as druids, in full, black, hooded cloaks. They do this funny claw salute, and ritualistically raise their drinks toward each other before taking a draught. At times, it can be difficult to tell how much of it is meant to be taken seriously, and how much of it is a hammy satire of the self-seriousness of metal crowds.

On this occasion there is no ambiguity. It is a show of some considerable beauty. Firstly, as is their wont, they absolutely flood the stage with smoke - it swirls, and billows, and it keeps coming, and coming, and coming, ending up as something with as much forceful tangibility as the sound itself. Coupled with some lighting tricks, the concert gains some unforgettable images: from the illusion that stage is ablaze with fire; to being absolutely obliterated by towering white lights, masking the band entirely; to lasers which fire out from fingertips.

Through this use of light, the space itself seems to expand and contract in a disorienting, hallucinogenic way, towering upwards, and falling backwards, before suddenly collapsing and contracting to the miniature. It gives the hall an uncannily limitless, infinite quality which matches the sound perfectly. It turns an aural experience into a full blown sensory hijack.

Ultimately, this show concretes Sunn O)))’s status as members of the avant garde, rather than the metal scene. I have only ever seen the band in concert halls, and I cannot really imagine sustaining this from a standing position, nor could you really get a stage show like this in a club venue. The concert hall is where they fit best, and the show tonight shows off their mature, experimental flair, just as much as their violent power.

The set opens, for instance, with an unaccompanied vocal piece, which shows off Csihar’s staggering ability to go from inhumanly low notes, up through uncharacteristically melodic highs. There is also an extended passage of keys and trombone, using ambience and minimalism to convey a different sort of dread. Tonight is so much more than cabinets and claws. Sunn O))) have always been the doom band that Pitchfork readers know about. Now they are fully fledged members of the concert class - a band of true artistry and importance.