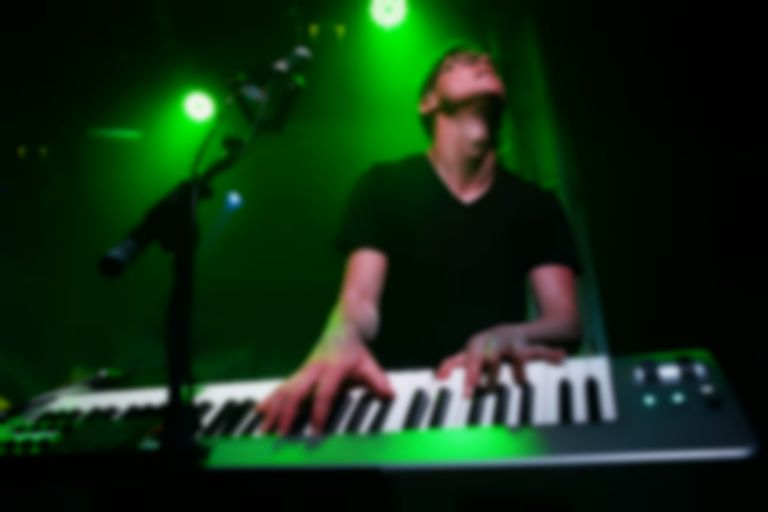 “Oh-oh we’ll brace for it/And conquer everything”. Right from the outset, Ryan Lott throws down the musical gauntlet. The man who is Son Lux, alongside Rafiq Bhatia on guitar and drummer Ian Chang, launches straight into “Alternate World” and for the next seventy, breath-taking minutes rises to that challenge with a bravura performance that first explores and then extends the infinite possibilities of his sound.

Ryan Lott is a man of many and varied talents. A classically trained musician, he is a writer, producer and composer. He is also a collaborator – most recently with Sufjan Stevens and Serengeti on their self-titled début long player Sisyphus – though it is perhaps as Son Lux where he’s achieved his most critical acclaim. Since 2008, Lott has released three studio albums under that name and it is into those recordings he dips for this evening’s show.

“Alternate World” is the opening song from the third of those releases, Lanterns, one of the records of last year; a musical point at which the neo-classical and the popular song meet, it’s a perfect example of modern sonic engineering. In concert, though, it moves into an altogether different dimension. Using the platform of his own synthesized orchestral flourishes, Bhatia’s twinkling guitar and Chang’s colossal, off-kilter drums, Lott’s voice assumes faux-operatic proportions as the song’s refrain fills the room. “Alternate world/Alternate age/Alternate life”, he sings, as if to emphasise just how thrillingly different this music is.

On Lanterns, “Easy” is a deceptively simple marriage of electronica and voice, a beautifully tranquil passage in time. Much nearer to its recent reinterpretation with Lorde, live it is pumped up, stretched out and invigorated by a phalanx of parping horns and Bhatia’s squalling guitar. “Claws”, taken from Son Lux’s second album We Are Rising, is another scabrous, vaguely sinister exercise in how well Lott is able to fuse the spirit of the past with the present, whilst “Ransom” with its bubbling synthesised melody rises to a euphoric denouement that has Bhatia bouncing up and down in fervent time to the song’s escalating, closing rhythms.

As if possessed by an innate sense of motion, the set shifts effortlessly through different gears, songs, time changes and genres. Opera, progressive rock, synth-pop, classical and shades of jazz hold no fear or present any barrier to Lott and the breadth of his musical vision. He, Bhatia and Chang finally reach the most joyous of conclusions with an intoxicating romp through “We Lost It To Trying”. Whatever may have been forfeited then, success was undoubtedly found here this evening as Son Lux’s first ever visit to Leeds was crowned in quite remarkable triumph.