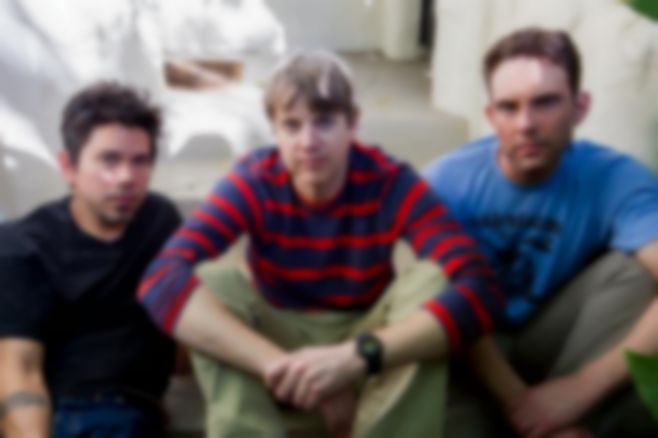 Probably everything that’s ever been said about Slint has been said, and said a thousand times over: the legendary status afforded to Spiderland, the intense recording of the record over one weekend and the alleged hospitalisation of members of the band following this, the split on the eve of the release of the album, the reunion shows, the box set reissue of Spiderland, more reunion shows, rumours of new songs…it’s been done.

So how, then, do I write about seeing Slint live for the first – and possibly only – time in my life? My story probably isn’t that different to anyone else standing around me but I’ll tell it anyway; there used to be a record shop upstairs in the branch of John Smith’s bookshop that was once situated next to Hillhead underground station in Glasgow. I was a teenager the first time I discovered it, staffed by Stephen McRobbie of The Pastels and David Keenan of Telstar Ponies, and through that store I was introduced to music I wasn’t able to find in other record shops in the city: Television Personalities, the Cardiacs, Silver Jews, Fugazi….the list is endless. One day, I noticed the name of Slint. I may have skimmed over Spiderland before that point in the vinyl racks but I didn’t have a record player at that time. I found that album again though, among the CDs, along with Tweez.

I vividly remember putting Spiderland back in its place, heeding the message on the case that “this recording should be listened to on vinyl”, and choosing to buy Tweez with its curious tracklisting consisting purely of names (the parents of the band members, I’d discover at a later date). I’m glad I made that decision as the furious sound of Tweez, that clanging opening of “Ron” sounding like nothing I’d heard before, was perfect for me; Britt Walford’s drumming sounding like he was hitting radiators, David Pajo and Brian McMahan’s guitars managing to be clean and distinct yet messy and improvised, and then McMahan’s vocals buried, mumbled, cryptic, fascinating…..Tweez, for me, still pushes Spiderland close as the band’s best work.

Of course, it was Spiderland that eventually had the biggest impact on me and the one I still listen to the most, completely deserving of its mythical and legendary status and without doubt one of the greatest albums ever made. But what it also did for me was to open up a world of music that houses some of my favourite acts: Will Oldham (thanks to that cover photo), Rodan, Rachel’s, Shipping News, Tortoise, The For Carnation – I’m not sure I’d have found any at that important point in my life if it wasn’t for Slint.

It’s for all this (and by this I mean the music and also why you find me writing here and now) that I’ve never had mixed feelings about seeing Slint live, never worried about hearing any new music from the band. Spiderland comes from a time in the lives of four kids who probably didn’t realise what they were about to unleash, and they’re never likely to find that energy, fun, intensity and anger as a bunch of guys in their 40s. Those records are a product of their time and environment and the sound will never be reproduced or recaptured. But I’ve always been desperate to see the music being performed live – sure, it’s a reunion tour but one that feels finite, unlike a band like Pixies who are slowly becoming a tribute act to themselves…and that’s with new music – and tonight I finally got that chance.

Everything is perfect; starting with “Glenn” (from the s/t EP) is a stroke of genius, Walford’s stuttering drums are circled by Pajo and McMahan’s clean guitars, the menace still apparent twenty-five years down the line and it’s the moody introduction everyone wanted. “Breadcrumb Trail” (augmented by McMahan’s younger brother Michael on guitar, a touring member along with Todd Cook, replacing Todd Brashear on bass) is greeted with an almighty roar, not just for Pajo’s gorgeous chiming riff but for the first time the majority of us have been in the same room as McMahan and his enigmatic mumbling. “Nosferatu Man” becomes proto-metal, complete with shining edges and muscle it’s always hinted at, and later we get a nervy “Washer” which feels as anxious and full of dread as ever. There’s a palpable shiver of something around the venue when Walford steps out from behind the drums to pick up a guitar and intone, full of foreboding, “Don stepped outside” signalling the beginning of the doom-folk “Don, Aman” which explodes louder and fiercer at the end than I could ever replicate on speakers turned to full volume.

Of course, “Good Morning Captain” is the most rapturously received moment of the set, we all wait for McMahan to scream “I miss you!” at the end, and he does…but it’s not the release of emotion I expected to have. Instead, my mind returns to that young man roaring those same lines with every part of himself, sickening himself mentally and physically and I’m left to wonder what impact Spiderland had on those four kids smiling back at me from the cover of the album, what they carry with them today as a result of making that record. What’s the cost?

Slint leaves, and returns to thrash out an astounding version of “Rhoda” as an encore before leaving again, the slightest of waves as an acknowledgement to a receptive crowd. The show was everything and more, any worries of being let down by twenty years of anticipation dissolved by one chord strike. Everything that can be said about Slint has been said so I’ll leave it at this: thank you. For everything.