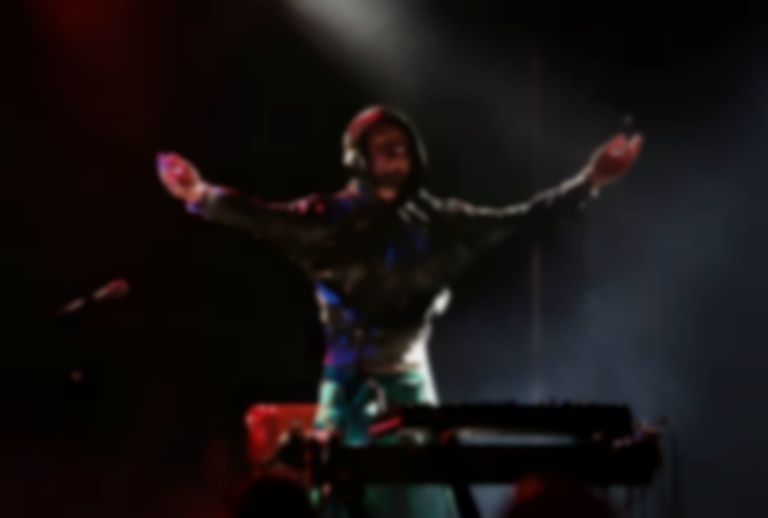 Fresh from their performance at New York’s Winter Jazzfest, The Comet Is Coming took to the stage early on Sunday morning to an air of great anticipation, performing as part of Wormfood’s late-night 10 Year Anniversary celebration. With the crowd already suitably warmed to this point up from Wormfood’s all-star roster, Dan Leavers, Max Hallett and Shabaka Hutchings (adopting their on-stage pseudonyms Danalogue the Conqueror, Betamax Killer and King Shabaka) arrived in full force, showing little sign of jet lag or being put off by their late stage time. With the band’s following largely based around their live performance (leading in part to their 2016 Mercury nomination for Channel The Spirits), and having only heard the group’s material on record up to this point, I was eager to finally witness the hype in the flesh and see whether it could live up to such dazzling expectations.

The band finally joined the party at 02:30am, by which point the atmosphere inside the Electric Brixton felt about as far-removed from a typical jazz event as you could imagine. Far from showing signs of dying down, the dancefloor was heaving with excitement, as an eager crowd piled in for the final live act of the night, leading me onto the balcony level for a better view. Although I had assumed the band’s crossover dancefloor appeal from their records, it nevertheless came as a surprise that this instrumental jazz trio could attract such a sense of anticipation in a club setting. Indeed, as they took to the stage following an introduction as being ‘one of the best live bands in the world’, I could help but struggle to imagine how they could possibly not fall short.

Thankfully however, The Comet Is Coming seemed immune to such introductions, as they set course with their immersive opener “Prophecy”, a tense spiralling mix of cymbal shimmer, synth bleeps and dubby saxophone drones. Embarking on their cosmic voyage in true style, the group teetered on the edge for a few moments, taking the audience to hysterical levels of tension, before finally breaking into the 5/4 groove of “Journey Through the Asteroid Belt”. The displaced time signature of the track, accompanied by Danalogue’s distorted bass stabs and Shabaka’s hypnotically repetitive sax lines both confirmed and snubbed dancer’s expectations for a rave – nevertheless, the crowd moved excitably to the strangely infectious groove and cheered on their approval.

At once I was completely transfixed by the group, in part because of the music itself but also due to the reaction it was getting. From too many experiences of going to see contemporary jazz acts live, only to be put off by the chin-stroking hipness of the whole occasion, it felt genuinely refreshing to see a crowd engaging with such ease, and without the intellectual baggage I had come to anticipate. That’s not to say that the more orthodox jazz sensibilities of the outfit went unnoticed; it was after all quite unmistakable that we were watching an exceptionally talented trio steeped in jazz traditions. However, the ability of the set to remain so accessible in this context was something that felt genuinely quite fresh and unlike much else I had seen before.

Shabaka’s restraint in his parts was perhaps the most conscious choice here, opting for extremely repetitive saxophone hooks that provided an infectious momentum to the performance, placing him at the core of the trio’s energy. This sparseness served as a stark contrast to the countless occasions I’ve watched otherwise captivating jazz musicians slip into self-indulgence in a live setting, with extended, sprawling solos that begin impressively but ultimately disengage from an audience. There was no danger of that tonight however, as Shabaka anchored down the trios repertoire with his idiosyncratic style of playing, urging the set forward with his short, stabby phrasing.

Halfway through the set and the band took it up a gear again, diving into their usual sped-up rendition of “Space Carnival”. For me, what began as a set highlight soon disintegrated slightly into sensory overload, as frenzied strobe hid the band from view and blinded the audience. Up on the balcony level at least, this had been quite a distracting feature throughout, and although bearable in places the lightshow quickly became quite off-putting. Of course for dancers below this probably had it’s merit, in which sense I was probably alone on this issue, but I couldn’t help feel that this overshadowed the performance slightly, especially considering the very immersive nature of the music itself. This is nothing to take away from the group though, and all things considered the group pulled off a pretty impossible task to meet such expectations placed on their shoulders. Indeed, despite having my eyes closed an undue amount, I couldn’t help but be completely sucked in by the whole experience - and that probably says more than it would otherwise.