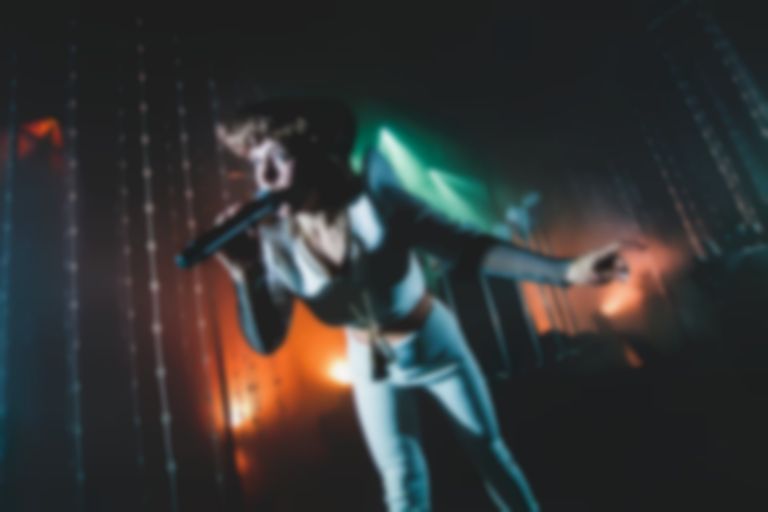 Witnessing Purity Ring live is like watching a scene from a dream; beautiful, impenetrable and hypnotic. Tonight (30th April) at Shepherds Bush Empire, a full moon hovers over an enchanted forest; hundreds of twinkling lights dangling on either side of the stage. Colours shift according to mood, vividly bright one moment, doused in nightmarish shades the next. Centre stage, Purity Ring’s beatmaker Corin Roddick is surrounded by strange crystalline cocoons that flare with every chime and bleep. Upfront, vocalist Megan James seems detached from the proceedings, entwining herself in the lights, shrouded in smoke. Her choice of outfit: a tight white catsuit with pyramid shoulders is used to anything but sexual effect. Less a Gaga-esque fashion statement, more beautiful Fifth Element alien, she seems otherworldly, untouchable.

Times have moved on since the ethereal Canadian duo first presented their self-coined ‘future pop’. Their gore-splattered, spellbinding debut Shrines cross-pollinated from bass-heavy trap, electro-pop, RnB and witch house. James’ sweet, breathy vocals were betrayed by abstract, grisly imagery; the dismemberment of bodies, fractured skulls and dead birds. In 2013 there was nothing else that sounded quite like it.

In 2015, follow-up Another Eternity sounds less like the future and more like the present - indeed Katy Perry is amongst the band’s ever growing fanbase. The tense, claustrophobic euphoria that made Shrines such a compelling listen has been mostly traded for bigger and brighter EDM synth-pop, pitching their sound closer to the mainstream. It’s an unsurprising move given the band’s recent work remixing Lady Gaga and collaborating with rapper Danny Brown.

Predictably then, new tracks make up the bulk of tonight’s playlist. Effervescent single “Push Pull”, the prettiest thing the band have done, sees the stage drenched in pinks and yellows and could have slotted nicely on Sia’s 1000 Forms of Fear. On “Dust Hymn”, Roddick intertwines ravey synth stabs, glitchy, trap keys and icy chimes to reach a crescendo that sees James climb the set high behind him, silhouetted by the full moon. The newer material sounds bigger and bolder, “Bodyache” and “Begin Again” could easily grace the playlists of daytime radio, but much of it is surface. In nailing those sharper hooks, Purity Ring have yielded much of their depth and nuance.

That much is clear when the band air material from Shrines of which only “Obedear”, “Lofticries”, “Belispeak” and “Fineshrine” make the cut. “Fineshrine”’s “Cut open my sternum and pull my little ribs around you” chorus is as striking as ever, while the warped, shuddering bass and disembodied vocals of “Belispeak” allow Purity Ring to cast their spell, veiled from behind vapoury synths and chopped-up distortions. Next to them, the poppier tracks; the gleaming slow-jam of “Repetition” and “Heartsigh”’s ravey stabs, seem glaringly generic

Then again, later and during the piano introduction to “Sea Castle”, James is suspended over a set of spotlights, sending beams off in all directions. Cutting through the darkness, her voice rises to a yell during the dramatic chorus and it’s clear that while Purity Ring’s new sound might not put them ahead of the curve, they’re still capable of creating something magical and intense.