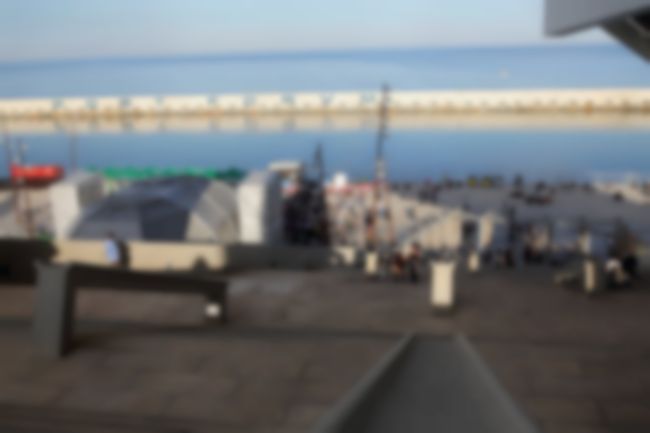 Looking back now, my first experience of Barcelona’s Primavera Sound feels like a dream. A vast concrete fairground flanked by a silent sea on one side and glass-clad apartment blocks on the other, (almost) always bathed in glorious sunshine, scattered with off-kilter structures, domes and tents like an abandoned Epcot Center. And this year (as for most years) boasting the strongest and widest-ranging line-up of any European festival. Of course there were the downsides, not least the heart-wrenching clashes and the unavoidable corporate branding (I found myself fighting the urge to channel Dennis Hopper in Blue Velvet every time I went to the bar – ‘Heineken? F-ck that shit! Pabst Blue Ribbon!’) but nothing’s perfect.

Noisy Dutch veterans The ex are the first feel-good hit of the day – delivering no-bullshit, up-tempo post-punk and actually looking like they’re having a whale of a time doing it. “Some say my bodies gone” sings Arnold De Boer, but The Ex look much sprightlier than the majority of the whippersnappers we’ll see over the weekend. Over at the Ray-Ban stage (an unbelievably picturesque amphitheatre with a Mediterranean backdrop) Brooklyn’s Antibalas destroy our intention to ‘pace ourselves’ with their street-smart Afro-Latin fuego – the twelve-plus members whipping up a whole mess of grooves that feel at once vintage and current – and before I know it, mild feet shuffling has transformed into whole body spasming.

I’d seen one of Neutral Milk Hotel’s Roundhouse shows a week earlier, so had planned to forgo their Prima set for something fresh. However, that performance was so good that I found myself magnetically drawn to the ATP stage for a second helping. Again, Jeff Mangum’s voice and the setlist was absolutely peerless from the off, with everything from In An Aeroplane Over The Sea sparking mass sing-alongs but somehow, I didn’t detect the wild fervour of devotion in this crowd’s eyes as I did in London.

After a brief injection of hits from Queens Of The Stone Age, we returned to ATP for their in-house band Shellac (reportedly the only band allowed to play Primavera in consecutive years). I don’t use the word incendiary lightly (well, I probably do but I really mean it here), but it really felt like Steve Albini’s guitar was ‘capable of causing fire’ at regular points during proceedings. Opening with a savage “The Crow” and ending with the deconstructive “The End of Radio”, this really was a classic Shellac show – loud, stripped down and caustically funny. Best Albini ad-lib? “Back then/You had to look a man in the eye/Before you killed him.”

Going directly from Shellac’s brutality to Charles Bradley’s emotional outpourings turned out to be the best one-two punch of the weekend. The 65-year-old one-time James Brown impersonator and his super-tight band stunned everyone with an explosive soul and funk revue - unbelievable vocal performances, white suits and splits galore. Go and see this man as soon as you possibly can – bring dancing shoes and a box of tissues and prepare to tell your mates that you love them, multiple times.

One of a number of torrential rainstorms happily coincides with John Wizards’ rearranged set in the imposing blue slab that is the Auditori Rockdelux. Although jetlag stifles the South African’s first few numbers, they’re soon into the swing of it, boosted by the mid-set arrival of talismanic singer Emmanuel Nzaramba, cherry picking from their fantastic self-titled debut. Perhaps this gloomy box isn’t the right venue for their sunny, bouncy grooves – a politely enthusiastic crowd gathers against the wall of the cavernous theatre rather than centre-stage where they belong – but by the time the stratospheric riffage of “Tet Lek Schrempf” cuts in, it seems John Wizards have made a lot of friends here.

With the uncharacteristic precipitation forcing us to keep our seats in the Auditori, one-time Bad Seed Mick Harvey takes us through a selection of his Serge Gainsbourg covers (unashamedly declaring that he’s here because Mute are re-issuing the albums they come from). With a large string section, slinky backing band and breathy female vocalist, Harvey conjures up some moments worthy of the man himself but I get the feeling a large chunk of the crowd is merely sheltering from inclement weather rather than listening. A bizarre (and hopefully comic) interlude of “Je T’aime” involving Harvey playing lacklustre bongos over a tape of the Gainsbourg original is our cue to skedaddle and emerge into the sunlight - balance is restored.

Slowdive’s much-hyped reunion draws one of the biggest crowds of the weekend to the Sony stage. However, as I watch them, flanked by two huge video screens masquerading as Sony smartphones, I think two things (a) they need to be much, much louder and (b) I’d rather be watching My Bloody Valentine.

Putting the ‘Kim Deal or No Deal’ gags aside, The Pixies set never ignites, which is insane when you consider that 95% of the crowd hear probably know 95% of their back catalogue inside out. Meanwhile, much hyped metallers Deafheaven also turn out to be a bit of a damp squib on the Pitchfork stage – the dynamics of their recorded output don’t really translate, and most of the crowd watch with hands in their pockets – passers-by rather than die-hard fans. For a band with such a confrontational sound that’s a bit of a shame.

Australian duo Jagwar Ma are the saviours of day 2’s late-night line-up, their swaggering grooves and euphoric melodies whipping a big Ray-Ban stage crowd into an arms-up, shirts-off frenzy, like Spike Island but a lot warmer and much better looking.

Watching Television perform one of the classic albums of the post-punk era in glorious sunshine isn’t a bad way to kick off the third and final full day in Parc Del Forum. Tom Verlaine’s guitar playing is spot-on and his oft-maligned vocals aren’t too shabby either. In a line-up where they may have been overshadowed by higher-profile reunions they should be quietly proud. Over on Ray-Ban, Tropicalismo figurehead Caetano Veloso captivates a large crowd with his broad-ranging songwriting chops – Beatles-esque pop, pretty bossa nova and quiet waltzes are all present.  The Dismemberment Plan’s London reunion show left me mildly disappointed so it gives me immense pleasure to report that this time they were fantastic. To be honest I’d probably be more inclined to play a decent set whilst I gaze over the Mediterranean rather than peering into the grotty recesses of the Electric Ballroom. Classics from Emergency & I like opener “The City” and “Gyroscope” got the wildest reactions, though I even found myself enjoying bit and pieces from Uncanney Valley.

Kendrick Lamar should have been great but didn’t quite seem like he wanted to be there. Still performing material from 2012’s undoubtedly great good kid, m.A.A.d city, perhaps it’s time for some fresh stuff from K.Dot. In sharp contrast, Seun Kuti is a furious ball of energy, testifying on the state of modern Africa while his late father’s Egypt 80 band back him every step of the way with raucous yet razor sharp, brass-splattered grooves and spindly indie kids try in vain to imitate his backing singers’ bawdy dance steps.

I hadn’t seen a Mogwai for a fair few years and, although they were firmly on my to-see list, I was expecting their show on the ATP stage to be a fairly inoffensive run-through some classics (a la The Pixies on day 2). It turns out I couldn’t have been wrong, as Stuart Braithwaite and chums remind us of their status as masters of both quiet minimalism and explosive noise (and completely surpass their heroes, Slint, who played the same stage about 24 hours earlier). A late contender for set of the festival.

All that’s left is for DJ Coco to bust out his obligatory 4am party set to soundtrack the sunrise for a huge crowd (both off-and on-stage) at the Ray-Ban stage. From “Rhythm of the Night”’ to Rancid, “What is the Light??” to Lykke Li, it’s essentially the best indie disco in the world. But, alas, even DJ Coco can’t play forever, and as the last song fades out and we find ourselves checking the time and rushing for the nearest exit – eager to preserve our memories of this dream of a festival.