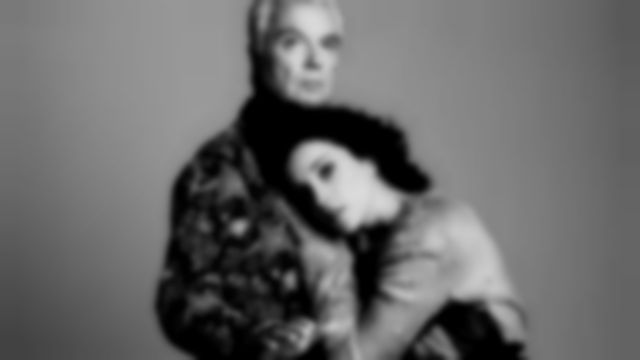 An overture of lilting bird calls greets the assembling crowd as they fill the vast Eglise St. Jean Baptiste in Montreal to witness David Byrne and St. Vincent’s performance. Even if one hasn’t spent any time with David Byrne’s solo efforts, it’s impossible to deny the indelible effect that Talking Heads had on the evolution of contemporary music. Annie Clark as St Vincent is a queen of the American indie scene, producing records of increasing brilliance as she hones her exceptional song-writing nous. These two artists, who provoke feelings of near-fanatical worship in their individual fan-bases and at least grudging respect from those whose sensibilities are repelled by their creations, were naturally brought together by music in their native New York City three years ago. Their collaborative album, Love This Giant, sprung from a mutual, professional respect that became an acquaintance shortly before a charity requested to have the two prepare a night of music for a fundraiser. Following this the pair of idiosyncratic Brooklynites maintained contact, slowly sculpting their artistic progeny.

David Byrne and Annie Clark co-wrote all but two of the twelve tracks on Love This Giant over a period of two and a half years. The album gestating gently as they sent compositions back and forth, occasionally meeting to record. The resulting piece is of the highest calibre. It’s not a concept album, it’s not a collection of covers, or of songs the other picked and then thrust into the coupling. It is a complete entity in itself, a new world that these two have masterfully crafted. Both Byrne and Clark can at times seem a little cold, almost verging on contrivance with their performances and recordings but here they appear to have brought out a more human warmth in each other and ultimately a work that makes a strong claim for album of the year. Not just stellar for a collaboration, a frequently rushed or indulgent form for which one often needs to make allowances, but a genuinely fantastic record.

The grand ecclesiastical setting for its performance enhances the palpable excitement and later infuses this superlative show with additional gravitas. It opens with recent single ‘Who’, the eight piece brass band springing to life and proving an instant delight, a rare sonic treat for most gig attendees. The gilted Baroque ornaments and gold leaf of the decorative panels above the church’s altar echo the light that bounces onto the instruments so that the musicians seem bound by design with their surroundings. The lights oft project their figures over balconies and across ceilings, conjoining them with statues of saints, as they roam the stage in a tightly choreographed formation. The show is very much a spectacle, the pinnacle of which is of course the chance to see these two artists in close proximity. Byrne’s voice proves rich and full, whilst Clark’s at many points induces chills.

The set naturally includes almost all of their joint composition, Love This Giant, as well as choice additions from each individuals’ repertoire such as ‘Marrow’, ‘Strange Overtones’, ‘Cheerleader’ and ‘This Must Be The Place’. Throughout the entire performance the brass, keys and drum machine arrangements are finely tuned to draw even more emphatic feeling out of already dramatic tracks and Annie’s exceptional prowess on the guitar still shining above the rest when let loose, but the most theatrical element of the show proves to be physical.

The brass band, like the two vocalists, wear monochromatic outfits and as they play remain fixed in finely tuned corporeal figurations, Byrne often to be found amongst them, at one with his small, golden army. In some early reviews much was made of Byrne’s reluctance to take the lead on this tour, of his deferment to Clark, but it seems clear that although she sparkles brighter, he still holds the reigns, the legendary orchestrator of this troupe. A lovely, visual analogy comes early on during St Vincent’s Save Me From What I Want when the shadow of his distinctively bobbing head looms across the balconies and over Clark’s tightly twitching figure. The two artists keep their trademark statures and tics throughout. Clark’s rapidly trotting then swaying form a counterbalance to Byrne’s looser, more pronounced movements, but they also occasionally come together in curious, near comical, synchronised routines. For all its structure it is still blatantly an immensely enjoyable show to be a part of. The two leads play off each other, visibly relishing sharing this stage, their theremin battle during ‘Northern Lights’ a particularly droll moment.

The musical highlights come thick and fast, ‘I Am An Ape’ and ‘The Forest Awakes’ reveals the true power of a brass band at this level of skill. However it is during the double encore, after a clamouring audience twice verges on shaking the churches’ foundations that the show turns into a party rather than a gathering of awe struck fans. Everyone finally stands, still rapt, as the musicians return to the stage to perform ‘Cruel’ and then near universal Talking Heads’ favourite ‘Burning Down The House’.

During the second encore with the band temporarily dismissed up the aisles, Clark takes to the altar alone to perform St. Vincent’s The Party whilst Byrne sidles out of a side door towards the stage to look on, a proud patron watching as her voice reaches beauteous heights. The full troupe then returns for a rapturous performance of ‘Road To Nowhere’. Several rounds of thundering applause later the audience floods out to strains of suitably doleful exit music, a touch shell shocked by this evening’s events.