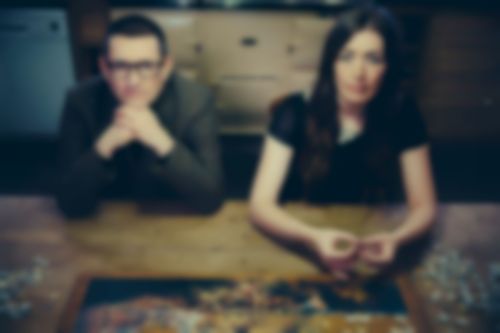 What better way to add a little more to the pot of your “life insurance” album policy than to hold its launch in your own pub? For his first release with Jacqui Abbott since she departed The Beautiful South in 2000, Paul Heaton invited friends, family and press to The Kings Arms in Salford for a short set of new songs, as well as hits from The Beautiful South and The Housemartins. And while there were only 12 songs, Paul – in one of many remarks that both himself and his songs are renowned for – was quick to point out that the lack of a ticket price meant that the evening was already good value for money.

Although he likens playing new songs to discussing life insurance (a seemingly reoccurring theme) with Pelé, they segue in-between the classics, as if those two decades in between Painting It Red and new collection What Have We Become – the “similarity” caused splits, the stalled solo-career and the battles for both vocalists with various parties – hadn’t ever happened. Not only for the ears, but for the eyes too: While Paul still seems like landlord you could spend a Sunday afternoon with, Jacqui appears to have aged backwards, looking younger than when Heaton first spotted her in the mid-90s.

Opening, as the album does, with “Moulding Of A Fool”, the blend of Paul’s vocals (a playful Northern twang, with bursts of opera) with Jacqui’s (a surprisingly stern voice to deliver the soap-operas) is enough to transport attendees to the late 90s and anywhere (or, indeed, Rotterdam). Despite last-minute dashes for lyrics folders and first night nerves early on in the set, the music spoke for itself.

The 300-strong crowd – inside a dome-shaped “Theatre” above the pub – sang and laughed in equal measure to the non-radio friendly version of “Don’t Marry Her”, and showed genuine interest for “Old Red Eyes Is Back”. But despite the greatest hits (released as a collection under the typically-titled Solid Bronze) this evening was a celebration for that rare occasion when a reunion (albeit, just the front section of the band) provides new material that is equal in quality and consistency to the songs that made them household names. For Paul, it was also a celebration that “D.I.Y.” – a hoedown of sorts – had made Radio 2’s A-list, a feat he celebrated by allowing himself salt on his lunch. His various projects haven’t ever been rock ‘n’ roll, but he’s a fine frontman and one of very few songwriters who manage to blend quality writing with wit and end up with something that isn’t laughably shit.

“I believe a love song should make you cry, make you laugh and give you an erection,” he declared – recycling an unused answer he gave a magazine many years ago – before breaking into “When It Was Ours”, the albums big ballad, and quite possibly the most poignant one he’s ever written. Despite the fact that, for many, this album and tour is a chance to hear The Beautiful South’s most memorable moments live once again, both the standard set and the encore end with Housemartins’ numbers. “Caravan Of Love” is flawless in all it’s a capella glory, while “Me And The Farmer” ends the evening. With the majority of the tour already sold out, and the lead-single A-listed, it looks as though this is a policy that’s guaranteed to pay out. Not only financially of course, but for Heaton’s legacy as one of the most unique writers of our time.