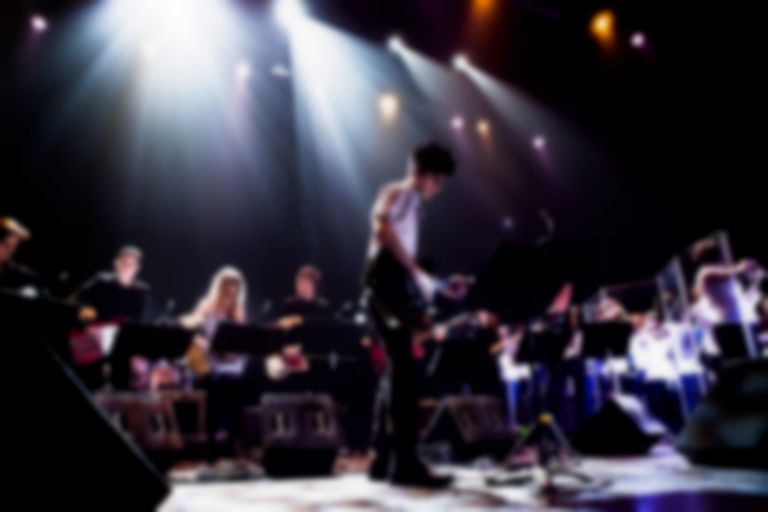 For one night, a very famous stage in London is packed to the rafters with an eclectic mix of talent. Members of Savages, The xx, The Magic Numbers, Deap Vally, Damon Albarn’s band The Heavy Seas and The Verve stand side-by-side manning their electric guitars. Behind them, there are also three drummers, a bunch of synths and a huge string orchestra, compiled mainly of students from Goldsmiths University. Finally, there’s the man behind this meeting of such a vast range of musicians here to deliver his vision. The man is Nick Zinner, and his vision is 41 Strings.

You probably know Nick Zinner best as the pretty nifty guitarist from the Yeah Yeah Yeahs. What you maybe did not know, however, is that he has a lot more to offer. Tonight he skillfully commands the stage, conducting the large ensemble and delivers a remarkable performance of his ambitious original composition. 41 Strings was composed in collaboration with Hisham Akira Bharoocha and Ben Vida of Soft Circle and was originally written for the 41st Anniversary of Earth Day. After performances in New York and Sydney, it has come to London for one night, and is nothing short of a spectacle, both for the ears and eyes.

The piece is written in what seems to be the traditional concerto structure, and uses Vivaldi’s “The Four Seasons” as its main influence, as it works its way through the different seasons of the year. It opens with “Fall”, which Zinner himself begins, confidently setting the tempo with a simple two note riff against a backdrop of silence. It is when the violins creep in that the impending power of the piece begins to hit you and you get a sense of what is going to come, as the melodies seem to creep up and down your spine.

The whole piece is startlingly beautiful in its build ups, with each new layer adding to the feeling of the changing seasons. It’s sophisticated, but completely approachable - one of the most successful parts of this performance is the fact that you could know absolutely nothing about classical music and still understand the way the music develops and feel deeply affected its soaring highs and lows.

It honours the traditional features of classical music, with its measured string parts where the violins reign supreme as they flutter away at the top of their range. Yet, it also feels impeccably modern, as the electric guitars bring a whole new stance to the music which makes the performance feel a lot more like a rock show.

There are points where the elegant energy of the performance is totally mesmerising, as the electric guitars play fast, crashing tremolo chords and the traditional strings soar above, while the synths blast out underneath. It’s this seamless amalgamation of the old and the new which makes the piece really take on its own personality. This is further pronounced by the vast range of different musicians and their different characters that physically come to life before your eyes.

As the final bars play out and the mighty “Summer” is brought to close after building to momentous heights, Zinner turns around to directly face the crowd properly for the first time. He does not say anything, but smiles and brings out a camera from his back pocket and takes several pictures of the crowd, capturing the rapturous response of the audience. Then, right on cue, the whole auditorium rises to their feet and gives a standing ovation to the momentous performance. Zinner is visibly humbled by the gesture as he clutches his chest, but it is justly deserved, and it is the least the audience can do to thank the musicians for such an impeccable night.