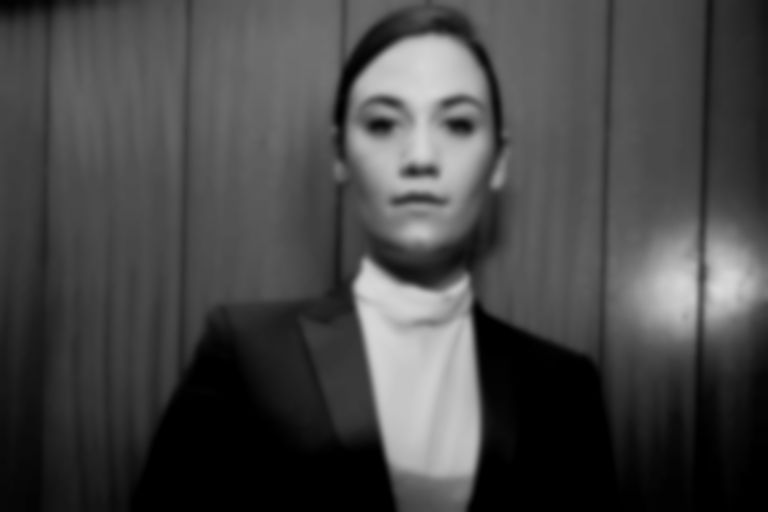 Often touted as Tyneside’s response to Nick Cave, Nadine Shah’s similarity to the Aussie auteur has been bashed over our heads for many moons, but it’s no less pertinent tonight at Bristol’s Exchange.

Both debut LP Love Your Dum And Mad and recent record Fast Food are complex abysses of morose post-punk sandblasted with an intoxicating swagger – moments of lightness are few and far between, and often dunked in a sardonic salsa beforehand. You might find hope, optimism and pleasure when rummaging in her lovelorn musings, but probably not in the first, second or tenth place you’d look.

Electrifying riffs flicker out of amps during evening opener “Living”, sludgy basslines oozing out like slugs marching to war, and her rusted croon trembling with tenacity. Southern Gothic tune and second record title track “Fast Food” follows, lolloping across an audience already enveloped in a thin film of sweat.

“The Gin One”, a woozy ode to her poison of choice, rolls over the crowd like an encroaching high, seeping slow into the eyes, joints and skin with a warm numbness. It’s one of the more kinetic cuts Shah and her band proffer, and with knees flexing and heads swaying, that sense of movement rubs off with ease.

There’s a blatant dichotomy between Shah’s stage persona and her recorded noises. You’d be forgiven for expecting Shah to be sauntering around the stage, surled up to the nines and spitting bullets at anyone who’d make eye contact… but she doesn’t. In reality, she offers fleeting camaraderie from behind her mic.

During her 75 minutes spent onstage, Shah reels off anecdotes like an old friend propping up the bar in your favourite watering hole, struggling to stifle expletives as she talks of tour life, her “Uptown Funk” cover that’ll never see the light of day, and flicks Vs at her merch mate. Shah also explains to the Exchange that her mother, newly acquainted with the Internet after being bought an iPad, reads Shah’s reviews, and subsequently lambasted her after a few mentioned her “potty mouth”. So, erm, sorry.

Shah introduces some first album tracks (an album that “only seven of you have probably heard of”), shimmering through the likes of “Remember” and “Floating” before the malice of “Aching Bones” swoops into earshot. Despite feeling pretty restrained on the record, Shah yanks on the ripcord and tumbles through the post-rock gamut, allowing all hell to break loose.

New singles “Stealing Cars”, a clattering clarion call about as close to pop as we’ll see from Shah, and “Fool” are a particularly strong way to finish the set, with the latter emerging as one of the strongest tracks in her arsenal – it’s definitely in its element slowly unravelled before the huddled masses.

This marrying of gut-wrenching emotion with flippant chatter is the key to her show being such a thrill. With the added levity, her lead-lined ruminations on the sheer futility of love are buoyed by sarcastic caveats and off-handed remarks that stop you slipping through the veil. People are able to get lost in the darkness knowing that there’s a light at the end of the tunnel. It might seem like a small point to get fixated on, but with tracks as dark as Shah creates, it’s nice to know that there’s solace outside the tangled Gordian knots of gloom.