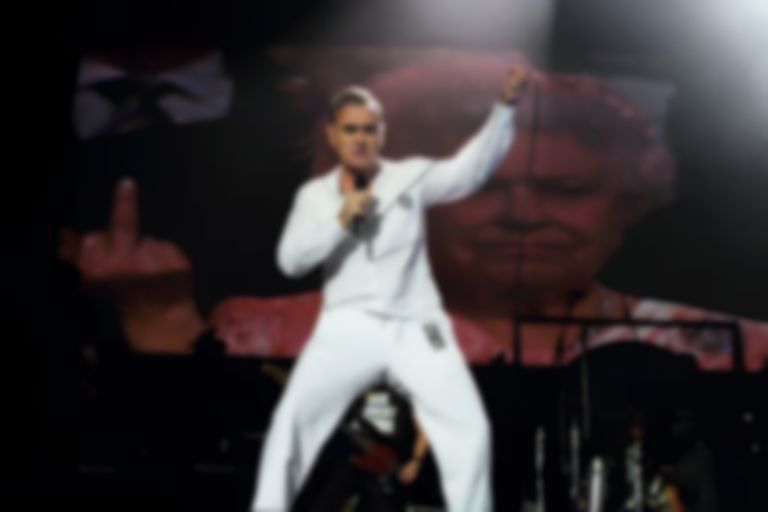 There’s something surreally devout about a Morrissey concert and, to appropriate a line from Monty Python, while he’s not the messiah he is most certainly a very naughty boy. From the PETA stands in the foyer to the sign behind the bar stating “At the request of the artist there will be no meat products available tonight”, it’s immediately clear who’s in charge. Before he plays “Meat Is Murder” he says “I was very interested to read about how 75% of chicken sold as food in the UK is contaminated, therefore poisonous and I thought to myself… Ha, ha, ha.” He’s uncompromising as ever, still raging against a world that speaks a different language and having fights with record labels - the band wear T-shirts emblazoned with the not so subtle “Fuck Harvest Records.” But he will always have his army of fans; this is a man for whom the live experience is exactly that, an event to communicate with his followers. Tonight the O2 is jam-packed; it’s probably the first time it’s been sold out by an unsigned artist.

When he appears his presence leaves you in no doubt you are in the company of a star. Dressed in what looks like an all-white karate outfit he’s almost a foppish version of Tom Jones, with his chest out and medallion on. The opener is The Smiths “The Queen is Dead” and the backdrop is a picture of her royal higness flipping not just one but two birds at the audience, it’s a very funny and blatant display of his continued contempt for the Royalty. It careers into a marvellous “Suedehead”, but then it’s time for the new songs.

Tonight the set is predominately drawn from the return to form that is the World Peace Is None Of Your Business album. Ironically its best song, the masterful “Oboe Concerto”, isn't played tonight, perhaps because of the rumours about his health and its ruminations on death - “All I do is drink to absent friends” - would be too mawkish. First up is “Staircase At The University” which features flamenco guitar and while it’s not up there with Scott Walker collaborating with Sunn O))), it does show him stretching his wings. And that voice, which has gloriously matured into a croon over the years, is still a marvel.

The title track of World Peace… is followed by the line “That was from our last album that was immediately deleted by a very clever record label.” Which prompts a mass of boos from the crowd, to which our ringleader quips “Well, let them know…” Yes, it’s a bit of a pantomime dame moment, but it fits with the whole feeling of theatre he brings to the live arena. “Smiler With Knife”, a tender lullaby, starts with minimal instrumentation, his voice is flanked with acoustic guitars, an Eric Satie like piano waltzes in, and then it flies into a giddy outro, with an ethereal E-Bow thrown in for good measure.

“Kick The Bride Down The Aisle" is all Jacques Brel, but with so many new songs the middle of the set dips a bit, but it’s part of the charm of Morrissey, he could easily decamp to Las Vegas and play “This Charming Man” until the end of time, but he’s never been one to sit on his laurels. The pace picks up with “I’m Not A Man”, the music is beautifully atmospheric, and whilst it’s not “Walking In The Air”, you could imagine it as the soundtrack to The Snowman, the refrain kicks in and there’s an spontaneous outburst of clapping. He ends the song as he starts it, on his knees with his back to the audience, as if in prayer.

He finishes with “Speedway”, the only song from his masterpiece Vauxhall and I. It captures him perfectly – abandoned and misunderstood, but ultimately a believer in the power of devotion. He changes the words slightly to the even more resigned, “When you try to break my spirit, I really wouldn’t bother”.

At the start of the encore he quotes an ominous line from Dido’s Lament “I would only ask remember me, but forget my fate”. He then plays a solemn “Asleep”, featuring just voice and piano, with his hands in his pockets. It’s staggering and creates a deathly hush, it also makes you think is he saying goodbye? He closes with “Everyday Is Like Sunday”, a reminder that Morrissey excels at making the bleakest stories sound, well not exactly happy, but strangely uplifting and of course he takes off his shirt and throws it into the crowd.

Morrissey has always been both a man of the people and untouchable star. The sheer theatricality that he still brings to a performance - part spectacle, part burlesque, all troubadour extraordinaire - is peerless. Where he goes from here isn’t clear and perhaps it is goodbye after all, but tonight was a masterclass in the art of showmanship and proved he’s still a majestic songwriter.