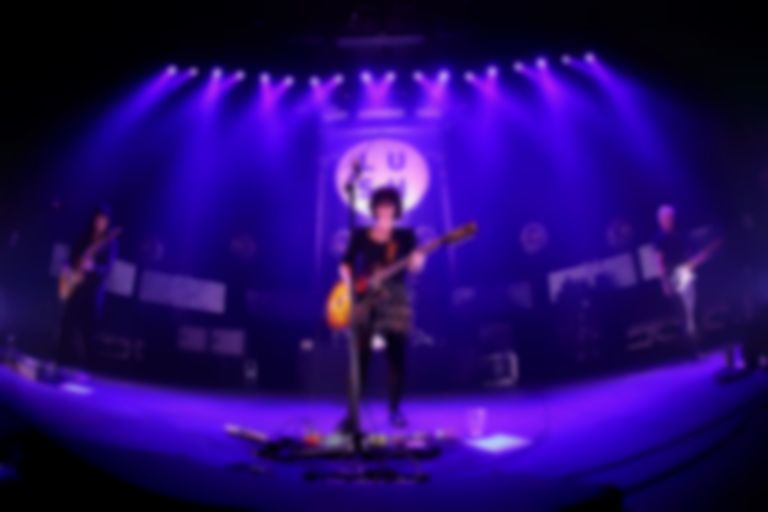 There’s a certain irony in the fact that the leading shoegaze bands, trumped by the rise of Grunge and Britpop in the 90s, are now reforming and playing bigger venues than ever. Not only that, but sounding better than in their pomp.

Tonight (6 May) on a balmy evening at London’s Roundhouse Lush make their own glorious return with a set predominantly drawn from their early EP’s and first two albums for 4AD, rather than their later, crossover hits.

Fittingly, their old labels great new hope Pixx is tonight’s support act and her ethereal pop music is a great fit with what’s to come later. When she emerged last summer the quality of her songs was undeniable, but a year’s touring has seen her develop her stage craft. Pixx commands the stage like she’s headlining it and songs like “Baboo” and “Grip” sound like hit singles. Her album is shaping up to be a highlight of 2017.

But the story tonight belongs to Lush. Having been synonymous with this particular part of North London over a quarter of a century ago - Miki Berenyi introduces them with an ironic “Back in Camden…” -  The Roundhouse is the perfect venue for them to reacquaint themselves with playing live, its cavernous roof providing room for the intricacies of the songs to breathe.

Opening with the evergreen “De-Luxe” Berenyi and guitarist Emma Anderson play its introductory chords at a slower tempo than the studio version, before being joined by Phil King’s bass and a resounding thwack of a snare from new drummer Justin Welch. The ex-Elastica man is filling big shoes, the tragic death of original drummer Chris Acland prompted a grief-stricken Lush to call it a day in the 90s. Acland’s contribution was integral to the music and Welch’s phenomenal playing tonight is a fitting tribute to him.

Berenyi seems in her element and her banter is hilarious, ranging from asking for a cheer for her child’s schoolteacher, who’s here tonight, to telling the crowd not to take too many pictures, explaining that the last time she watched a show here the incessant picture taking of the man in front of her prompted her to flick bogies on him. Such down to earth bonhomie aligned with the magic of a song like “Thoughtforms” sums Lush up perfectly, the epic scope of the music combined with irreverent humour.

“Ladykillers”, the only song they play from their final record Lovelife, is introduced by Berenyi with “OK, Britpop anthem time is it?” Their other Top 40 hits, such as “Single Girl” are notable by their absence. There’s the sense that Lush aren’t rewriting their history, but, like other bands from the 90s, reforming has given them a distance from their back catalogue to play the songs they want to hear.

Before the closing “Sweetness and Light” Berenyi says “I feel like I’ve run a fucking marathon, Jesus…” Nonetheless, as it reaches its middle section they rev it further upwards. When it ends she has a well-earned drag on her e-cigarette as she exits the stage.

The first encore “Stray” is dedicated to “the person who’s missing, Chris”, as a result its words “Do you still see me? Do you still hear me?” are incredibly poignant. The other encores, in keeping with the rest of the set are pre-Lovelife, the highlight of which is “Leaves Me Cold”, when it starts the sheer power of the instruments whack you over the head like a hammer, with Anderson adding some spikey slide-guitar, its noise melded with melody is a delight.

Tonight there was prescience to some of the words, “Kiss Chase” has the lyric “Though I'm older, nothing's changed”, Lush simply wrote brilliant pop songs and dosed them with beautiful time-changes and sounds, even with the reverb on Anderson and Berenyi’s vocals the melodies are pure pop.

That their new song “Out of Control” slots seamlessly into the set shows rather than being a nostalgia trip, instead Lush have a timelessness about them. Hopefully these shows will whet their appetite to write more new material, because Lush’s songs and sound have aged beautifully.
Setlist
De-Luxe
Breeze
Kiss Chase
Hypocrite
Love Life
Thoughtforms
Light from a Dead Star
Undertow
Lit Up
Etheriel
Scarlet
For Love
Out of Control
Ladykillers
Downer
Sweetness and Light
---Encore 1---
Stray
Desire Lines
Leaves Me Cold
---Encore 2---
Monochrome