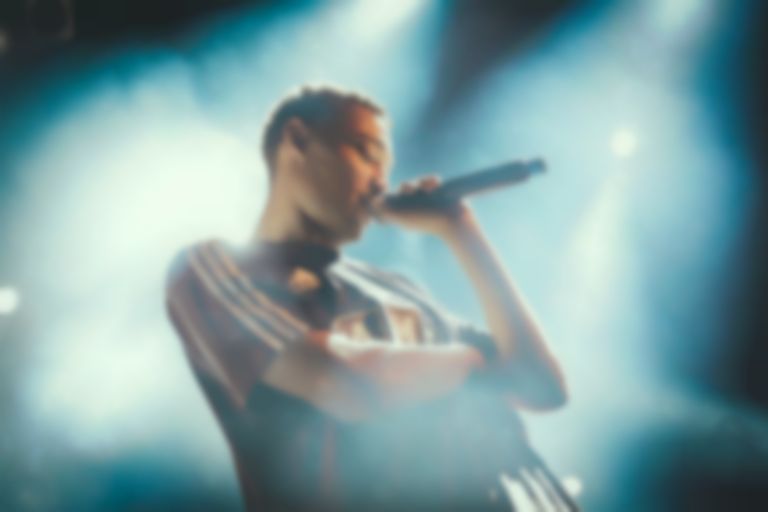 Earlier this year, Ben Coyle-Larner released a debut album that brought a new originality and honesty to British hip-hop.

Yesterday’s Gone is a record that has a poignancy that sticks with you long after listening. For all its melancholy and heartbreak, it’s full of honesty and hopefulness that prove Carner is a young man worth taking note of.

And at Shepherds Bush Empire tonight (18 Feb), as the epic gospel opening of "Isle of Arran" blazes out, Carner blasts in and sets the tone for the evening and perfectly manipulates the audience with his charm. He bounces onto the stage with all of the energy of a man who doesn’t so much as have something to prove, but something he wants to show and share. He's probably fully aware of the air of expectation that surrounds tonight’s gig, but displays no sign of caring or being phased by it. Instead, he seems absolutely at home playing a second sold-out show at the venue, as though he is truly trying to immerse himself in every second.

Onstage, Carner possesses a presence that is at once inviting and familiar but full of a confidence that has you hooked. He aptly expresses genuine emotion that strikes you with its eloquent honesty, and while the words come thick and fast, they never get lost.

For the whole set, he tugs onto a t-shirt that he slings across his shoulder like a comfort blanket. “This was my Dad’s” he explains, describing how he has to take it everywhere with him as a form of security and also as homage to his late step dad, who forms such a strong focal point of his work. It takes guts to be this open about loss, but by opening up his heart, Loyle Carner only invites you further into his world.

Working through the laid-back hooks of "Mean it in the Morning" and the poetry of "+44", he then invites Tom Misch onto the stage for a heart-poundingly beautiful rendition of "Damselfly" that ensures that not one person in the building is left on their seats. One of the most striking features of the evening is the diversity of the crowd who've flocked to it, showing that Carner's mature lyricism is able to connect with people from all walks of life. However, there's a strong presence of a dedicated younger audience who spit back every single word and show how Carner is inspiring a new generation of hip-hop fans.

There's no encore. Instead, Carner leaves with the same poignancy he started, finishing on "Sun of Jean", a track that ends with a snippet of his own mother's voice. It’s startling, beautiful and absolutely entrancing.

Tonight’s performance is a high energy, emotional rollercoaster that cements Carner’s reputation as one of the most exciting rappers to come out of London in recent years. With this level of maturity, and a dedicated following that already knows every word and treats Carner as the figurehead of a new movement, the future looks unrelentingly bright. Tonight, it’s Shepherd’s Bush. Tomorrow, the world.