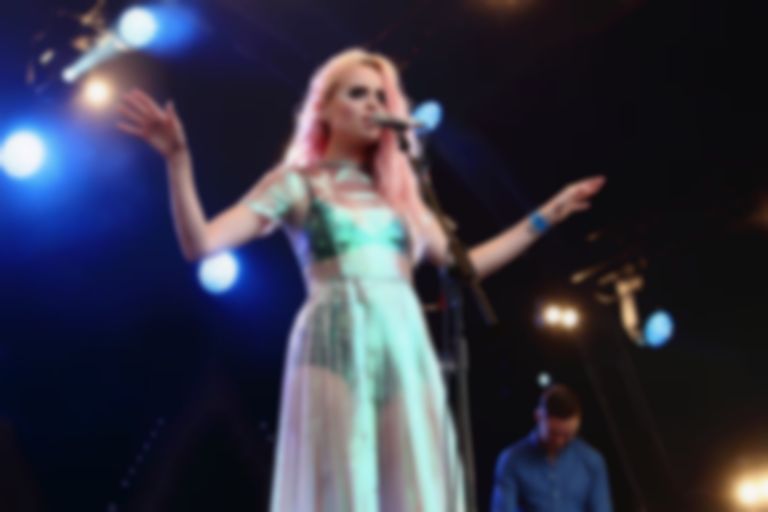 Semi-replicating the set-up that she has for her video for “The Knife”, Kyla La Grange saunters around a bedazzled stage for her show at Bristol's Thekla. Glittery foil bunting, floral arrangements draped around mic stands, fairy lights and a stuffed spooky camel toy... it's like being sucked into a Bizarro World village fête. Her set is pretty equally divided between her former country-western folk style and her current voyage of bristling synthpop. She's keenly aware of her two fanbases, and ably appeases both.

La Grange appears endearingly nervous. As the set goes on she opens up a tad more, but it seems like the intimacy isn't her natural space; it's not awkward or anything like that, but there are times she seems to keep more self-consciously reserved than she would otherwise like – fortunately, if her trajectory continues she'll be able to relocate to grander venues in no time. When she belts, she's got arena presence, and songs as genuinely huge as those that pepper Cut Your Teeth are crafted to fill the lofty heights of the NIA or O2.

“Cut Your Teeth” itself is a resounding anthem, and a stand-out track of the year for sure. The Jakwob-produced ditty snaps, crackles and pops amidst a heady thicket of minimalist electro and La Grange's impeccable vocals that skirt the territories of menace and agony. “Cannibals” is equally devastating, “White Doves” is a wiggly acid-fizz charmer, and “I Don't Hate You” is a tour de force of pop melody. Cut Your Teeth has been an unsung hero of 2014's pop output, and La Grange demonstrates with flair just how it's such a resonant, brutally hook-laden LP.

She also performs a healthy dose of Ashes material too, showing off her axe chops. There's smacking of Taylor Swift in La Grange's low-slung Americana and clean-sounding acoustic guitars. It's not saccharine, but there's a sweet tinge to the likes of “Been Better” and “I Could Be”, despite the former's definite edge, as well as a performance of “Heavy Stones”, which she admits to have only just put back in her set. La Grange clearly has everything – musically, anyway – going for her.

Sadly, tonight had hands-down one of the most disrespectful crowds you could cobble together from a who's who of awful gig-goers. There was the hideously drunk middle-aged guy (yes you, bald dude in the blink-182 shirt) grinding on teenage girls – at least two left in tears – lobbing his vodka Red Bulls at people and being such a nuisance security got involved. You've got the tallest banter pantrol in the land standing as close to the stage as possible but still only watching the show through their iPhones, not to mention the trio who only stop bickering to snap like paps the second La Grange bends over. That's all on top of an inane deluge of chatter droning throughout the entire set – so distracting that the band can't help but take notice. Granted, there are plenty of people that are pleasantly trying to enjoy the show, but there are just as many marring the experience for everyone else.

La Grange culminates a wonderful set – on her part, at least – with an acoustic rendition of 2012 single “Vampire Smile”. It's tender, fragile even, accentuating her star-crossed-lover lyrics, and it makes the crowd go wild. She reminds onlookers tonight that she has a huge capacity for pop brilliance, and hopefully that blocks out the unrepentant misogynists and incessant chatterboxes for most.