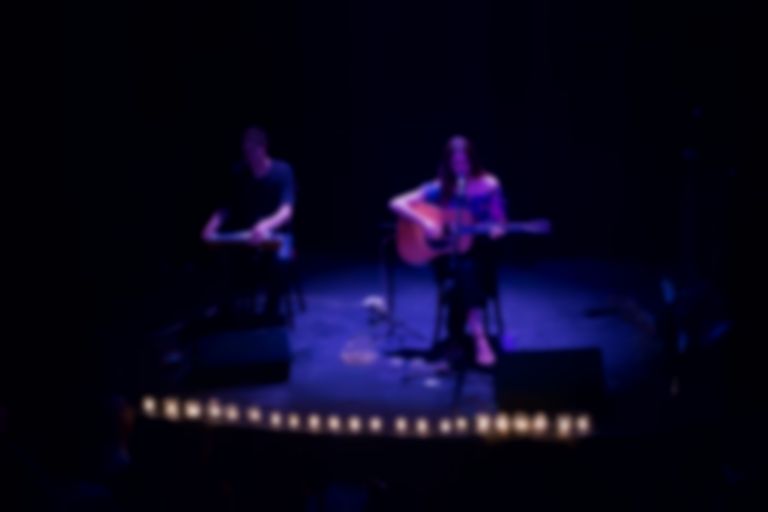 Julie Byrne likes the lights down. Before her set, she lingers at the foot of the stage, lighting some tea light candles to line the apron, gathered around her feet. Someone adds a large vase of heavily scented flowers.

Several times through the night, Byrne politely asks for the lights to be lowered further and further, until - by the final song of the encore - they’re out completely. We’re lit by nothing but candles, enveloped in whispered tones.

Before this, we’re treated to a spirited set of fingerpicking from Jim Ghedi. From a village near Sheffield, Ghedi’s compositions mine centuries of English music, while throwing in splashes of Welsh harp music and Irish gypsy songs. Though mostly instrumental, his discursive descriptions of the songs situate his work in the rich tradition of British folk, firmly rooted in people and place. It sets up Byrne’s drifting, nomadic narratives nicely.

Tonight, Julie Byrne is as sparse and stripped back as you would hope and expect - just her voice and guitar surrounded by soft light and hush; only the smallest scraps of accompaniment on a synthesiser adding a bit of texture at the margins on songs like "Natural Blue". Wisely, she doesn’t choose to branch out on her arrangements for a stage show, captivating her audience by letting silence slink through the spaces in her songs.

The bulk of tonight’s show centres on numbers from Byrne’s album of the year contender Not Even Happiness. It’s easy to forget, with pregnant pauses littered throughout her songs, that this second album actually filled her sound out a bit. Her (also wonderful) debut was truly sparse: loosely fingerpicked notes scattering across the floor, delicate and delicious. This one has a little more texture, a little more pace, and even the odd strummed chord.

In performance though, she regains the skeletal instincts of her debut. "Follow My Voice" doesn’t exactly have a busy arrangement, but tonight her guitar is almost entirely absent. Just one thumb strumming down on each chord, as if played by nothing more than a breeze. The synthesiser threads the notes together, but - as the title suggests - it’s Byrne’s voice which does the heavy lifting.

From a low, throaty whisper to a dancing falsetto, her deceptively versatile voice is always beautiful and balmy, whether she’s singing over near-silence, or a skipping, finger picked melody. And although she offers just a short set tonight, she draws us further and further in by the minute, inching towards the towering climax (by her standards) of closing track "I Live Now as a Singer". Then silence in the flickering lights. Sometimes you can barely see her, sometimes you can barely hear her, but with even less decoration than on her already unassuming records, Julie Byrne is even more intoxicating.