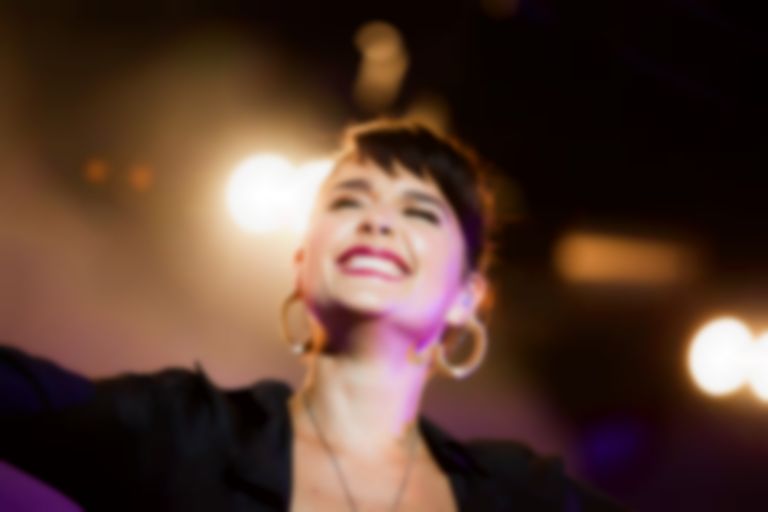 With debut Devotion a confirmed success of 2012, she managed to negotiate the tricky ground of being an online darling and BRIT nominee with relative ease, and a homecoming show at London’s Somerset House finds her continuing to concentrate her own particular take on intelligent pop music.

While Ware announces late-set that it’s probably the last show in support of the record, there are no indications of fatigue. The enthusiastic, chatty and scattershot girl next door that used to emerge between songs a year back is now an integral part of her commanding presence. The ease with which she’s embraced that part of herself sits side by side with an effervescence and energy that doesn’t dip at any point in the evening.

Devotion is a record that continues to reveal more with each play and Ware’s become attuned to the sweeps and drama that come with every key change and soft drop. She’s visibly empathetic to the expectations of the audience, holding back when she needs to, but rarely failing to deliver. A mid-set step up from her beats man Dornik – someone we’ll hopefully seeing more of – to proxy Sampha on a take of ‘Valentine’ is a welcome addition to the set but it’s still the flagship tracks of Devotion that the evening hinges upon. When ‘Wildest Moments’ hits, there’s a tangible release in the audience that validates everything Ware’s achieved so far.

Mikky Ekko provides a well placed support for Ware; both have that rare ability to weave the privilege of performance – a humility of sorts – into their sets without it becoming nauseating, dominant or, most importantly, inauthentic. Growing into his career and profile from an entirely different starting place, they’re roughly the same age and share a wisdom-driven wonder, limitless potential and fire in the belly.

A startlingly strong vocal coupled with some southern states charisma has given him the M.O. to skirt with ease from collaborations with Clams Casino to Rihanna without it seeming unnatural. While a solo rendition of ‘Stay’ is a high for the crowd, it’s ‘Pull Me Down’ and ‘Kids’ that drive the core energy of Ekko’s buoyant mid-evening set.