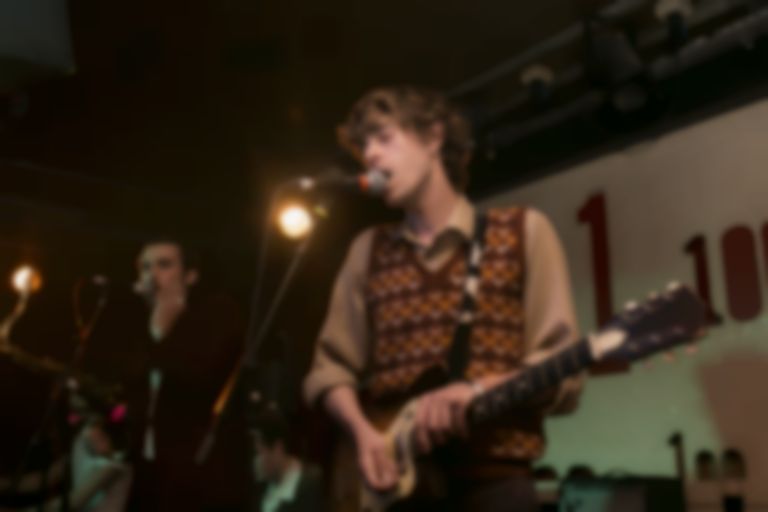 Insecure Men is the chaotic lovechild of Fat White Family’s Saul Adamczewski and Ben Romans-Hopcraft of Childhood. An unorthodox pairing you might think at first, but joined onstage by up to eight other band members, the duo’s creation is an eclectic mix of spellbinding sounds and intelligent songwriting.

With their self-titled debut LP released earlier this year, followed shortly by compelling covers album Karaoke for One: Vol. 1, they showcase a sound much more thought-out and contemplative than any of their other previous projects. An exotic blend of experimental instrumentation and smooth, alluring vocals, listening to Insecure Men transports you to a sunny beach as far away from the South London pubs where they originated as possible. And all this with plenty of cowbell.

Tonight’s appearance at the iconic 100 Club is in celebration of So Young Magazine’s new issue launch, and supported by bright young things Hotel Lux, Talk Show and Italia 90.

On the exterior, Insecure Men’s performance is understated and contained, but with their dreamy sounds and the presence of a decagon of members, they are a captivating display of quietly confident men – not so insecure at all. And under the cool, reserved façade it’s clear to see that the group on stage are having as much fun as the passionate crowd of misfits and non-conformists that are drawn in to watch them.

Playing through the majority of their album, the songs are as perfect and complex live as they are on record. The myriad of noises from various percussion, synths and a saxophone form the harmonious setting for Adamczewski and Romans-Hopcraft’s gliding vocals. Like a tropical mirage in the middle of a vast, scorching desert, Insecure Men offer an unexpected interlude of beauty in a world filled with turmoil.

They may not be what you’d expect from such an anarchic group of musicians, but they’re definitely worth your time. Oh, and they have a cover of Peter Andre’s "Mysterious Girl". Go give that a listen.