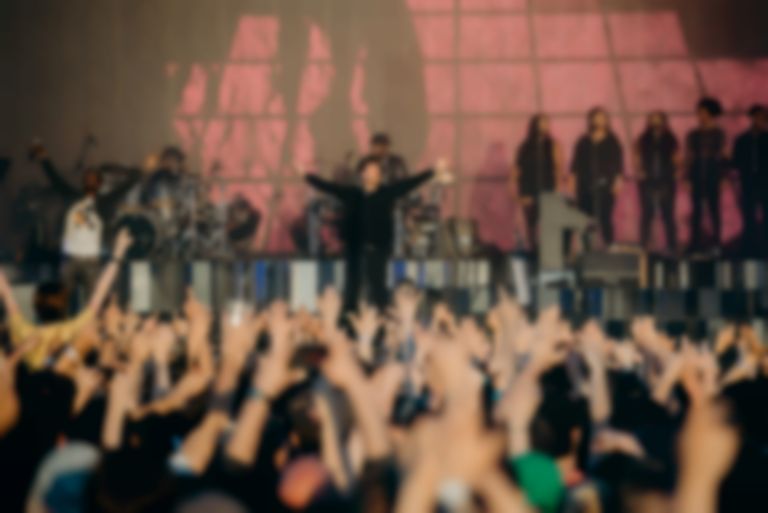 Once a place celebrated as an outer city paradise for the Victorian middle class, the once famous seaside resort of Margate has faced something of a rebirth in recent years. The first of this tide came with the opening of the Turner Contemporary in 2011, and then came Grayson Perry, and a community of Londoners tired of life in the city.

It’s a topic of conversation that dominates any of the early few hours we spend mingling around the town on an early summer’s afternoon. A conversation that brings me to want to find any local affiliation that gives me some strength in stating a claim to community, but I suspect a similar narrative is true amongst most of those coming down from London today.

It’s mid-June and most of us are here to see Gorillaz. The band are in town for one night, for Demon Days. The do is part re-launch and part celebration, bringing together some of the band’s more recent collaborators for a one day bill of music in the recently re-opened Dreamland amusement park.

The parks history extends all the way back to when Margate first became a haven of tourism, bringing those from the city within reach of a sandy beach in just under an hour. During tourist season, Margate’s population would swell to five times in normal size. An industry boomed around it, leading hoteliers and bar owners to set up shop. It also attracted the eye of one local circus entrepreneur, George Sanger, who was looking to take his circus off the road and find a permanent residence. Shortly after came a menagerie, the Hall on The Sea ballroom, and a mock ruined abbey and pleasure garden for the Victorian middle class to sweep through.

Just as Coney Island has in New York, over its years the park went from sustainable till running a loss, passed between multiple business owners until it closed in 2003. Standing sorry for itself, it wasn’t long before interested gathered in its re-opening, Funding behind the venture started to follow in 2009, before the park's re-opening six years later. But plagued with problems, it was shadowed with debt. Fast forward to 2017, and new investment money has lead to the park’s re-opening.

Coming with the opening is a whole host of events that will carry through the summer, the first of which is the Demon Days project. The festival itself sees the car park converted into a giant main stage area, while entry into the park and to the rides comes through a slipway to the right of the main stage.

Having been here for the re-launch two weeks earlier, and having seen the awaiting piles of sand and gravel where tarmac was due to be laid, the park has taken a massive move forward. But the space itself feels cold and brazen and a little un-thought out. There’s scarce the amount of traders needed for the 10,000 capacity crowd, and wells of water that gather all around the car park shout out that more planning needs to be done here before the site is fully there. But with time, this feels as if it will become more seasoned and comfortable.

Entry to all the rides comes free within the ticket price. And many make good use of this. There’s a near constant queue all day for the Ferris Wheel, but the more low-key rides, the swings, and the carousel, the big slide, gather much attention too.

This model of being able to split some of your time between theme park, and the other between music is refreshing. With a soundtrack of hip-hop and soul blasting out from the different stages, many also get themselves familiar with some of Gorillaz more recent collaborators. De La Soul, Kano, Kali Uchis, and Little Simz are all popular, but really many are here to see Damon.

I imagine some pretty defining questions will have been undertaken by Jamie Hewlett and Damon Albarn in the making of Demon Dayz. I imagine the discussion to build installation pieces in the site will have been there. I imagine at one point there will have been a tossup between deciding to run with the musical side of the project or the artistic.

A replica model of the Kong Studios greets us on the entrance; branded with a sponsored by E.ON Power sticker on the front of it, but the queue to get a peek inside is long.

For a band so entwined in their graphic personalities, any preservation to build a space that feels Gorillaz orientated is scarce. It seems a missed opportunity. The adaptation of the band for the latest album, Humanz, seems like a transition where the focus has been on its musical reportage more than its visual legacy. This is sad in a way, because the band's origins in a blindly artistic commissioning, a counter to the sadistic self-centred nature of early 2000’s MTV music, has all but disappeared. So too, does the legacy of the album Demon Days, an anthem for Bush-era politics, which listened now has aged and strengthened, a record that felt once felt purely speculative, now feels deeply prophetic. As one journalist described it, the album becomes, “a fucked up mirror, instead of a fantastical window”.

But the legacy lives on here in more subtle ways. Scattered across the audience are people in dress-up. There are little Noodles and Murdochs all over the place, their outfits lifted from the band’s videos over the last ten years. It’s in these fans that you can see how the discharge of Gorillaz as a visual band has become such an important part of the legacy, and while it feels under-represented here on a visual level here, it’s the fans that really bring it to life.

Come seven o’clock, and Gorillaz are about to hit the stage. Thirty cloaked bell-ringers descend upon the funfair, the bell ringers calling in the Demon Days. They head towards stage, as many of the audience follow them heel and toe.

The cloaks drop and the band are revealed. Fans rush to hug Albarn, before he takes the stage and begins the evening’s set.

Over the next two hours we’re treated to a huge list of material – old favourites, album tracks, and unreleased work are played alongside a smorgasbord of tracks from the new album. Many of the artists booked across the day, join as on-stage collaborators, with each marking their own presence in the Gorillaz lineage.

Some fans feel more comfortable with the new material than others, and watching the likes of Popcaan and Bootie Brown on the charm offensive in front of the Margate audience reveals the power of the band to push people’s tastes forward. Within the set there’s dancehall, soul and grime all smashed together. Many of the new collaborators help refresh much of the material, with Peven Everett, making an incredible job of filling in for the sadly departed Bobby Womack.

Albarn feels at his best when it’s shouting to be heard, and it’s on the more tender tracks like “El Manana” and “Rhinestone Eyes” where he really shines. At so many moments during the set, Damon’s voice feels lost in the instrumentation, a backline to the band’s playing.

Aside from music, Albarn takes a moment to reflect on the politics of the last week. “It’s been a really weird week, a big surprise and a really bullshit outcome. There were some of you out there who weren't able to vote this time but next time you'll be able to. It's going to grow,” he says, to roars from the crowd.

Much of the show feels like a more refined project, an austerity Gorillaz for an austerity government, less outlandish than the band's previous tours, more concentrated on providing a musical blanket to help calm the harsh tides of political uproar than a statement piece on the times. But it’s Demon Days that gets the last word here. The overture from the album finishes things for the evening. “Don’t Get Lost in Heaven” and “Demon Dayz” are played as one final piece, and whilst it feels underwhelming following “Clint Eastwood” and “Feel Good Inc.” – it’s the perfect way for the band to finish, an overture for the times, a musical counsel for the dark contorted world that awaits us beyond the walls of the amusement park.