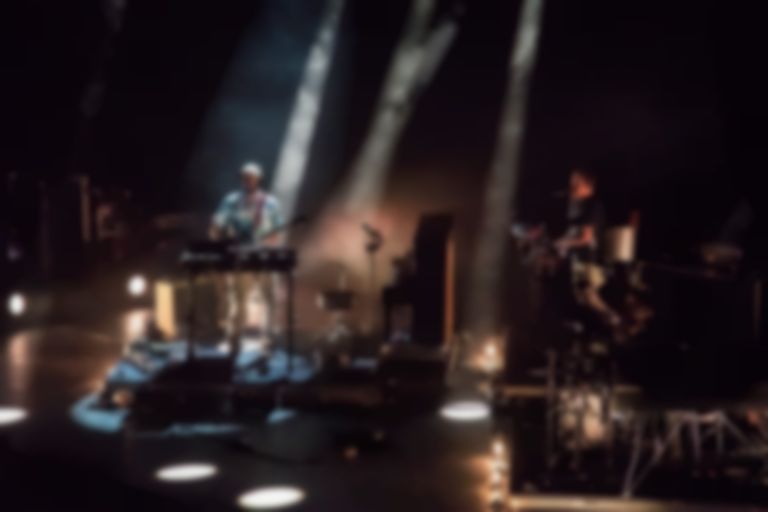 Ahead of their first UK headline date in five years, Bon Iver arrive in an off-season, off-colour Blackpool as a reduced company. Tonight just three musicians—Justin Vernon, drummer and signer Sean Carey, and Mike Lewis on saxophone and bass—suffice where past tours have required many times that number. It’s a potent reduction, and the evening is primed to be one in which the spotlight is firmly Vernon’s.

But that augury never comes to pass. Like much of the racket around last year’s remarkable 22, A Million, what emerges is a sense that Vernon is foregoing the limelight as much as his circumstances will allow, eager to relieve himself of grievances inflicted by a mystical folk-shaman narrative that was laid on a little too thick. Instead, this lightweight iteration somehow reinforces a notion of Bon Iver, not as a solipsistic outlet for one individual, but as a kind of assemblage: of people, of places dispersed along wayward vectors, of disparate musical influences, of instruments and technologies both pre-existing and concocted anew, of ideas.

At the very least, Carey and Lewis are afforded a certain prominence here, both musically, and in the case of the former especially, in terms of the affections of the audience (“go on, Sean-y boy!” seems, in particular, to tickle the trio). Despite the delicacy of his solo work, much of the newer Bon Iver material owes its robustness to Carey tonight. A vocoder carves blunt instruments from his usually nuanced vocals on ‘33 “GOD”’, and it’s his propulsive drumming that keeps ‘666 ʇ’ ticking. (More sensitive vocal work comes from harpist Mikela Davis, tonight’s support, who contributes a verse to ‘Flume’ and some plucked embellishments to ‘Holocene’).

And silly to think now of the disappointment provoked by the news that Colin Stetson would not be the headline saxophonist on 22, A Million (as had been the case with its predecessor). Where Stetson’s brute force athleticism offered a counterpoint to Bon Iver, Bon Iver’s more pastoral textures, Lewis’s exquisite melodic sensibility cuts like a warm breeze through 22, A Million’s digital convulsions. It’s when expressed as more shapely, abstract gestures, though, that his playing really threatens to turn you inside out: a chromatic corkscrew through the belly of ‘22 (OVER S∞∞N)’; a flutter and a palpitation in the pit of ‘Babys’.

This show is an opportunity to hear the full fidelity of 22, A Million’s sonic constructions, and the instrumentation also plays a starring role. Perhaps none is more emblematic of that album than a certain hodgepodge of pitch processors and CPU, one which takes an input (Vernon’s falsetto; Lewis’s improvisations) and duplicates it across a given harmony in real time. But Vernon’s music, like so much else that we listen to, is about failures of different kinds—psychic, interpersonal, romantic—and tonight I’m not so much interested in that the way this technology works than the way that it doesn’t. Processing audio in this way demands such a heavy computational load that the system buckles when Lewis’s breath escapes his horn (‘____45_____’), or when Vernon meanders between notes (‘715 - CR∑∑KS’), and these imperfections are gleefully exploited over the course of the evening. It is music at once about failure and a literal failure, and these failures are misfirings of the most sublime kind: confused, aching, a mess.

Since the release of 22, A Million the Bon Iver ecology has also been increasingly altruistic. Shortly after its release came the announcement of 2 A Billion, a campaign “intended to raise support, awareness and person-to-person connections in an effort to end gender inequality, domestic violence, and sexual abuse”. It’s an endeavour that’s partnered with a different charity in each of the cities through which they’ve toured, and tonight that implicates Lancashire Women’s Centres, who collect donations as we exit. “If you aren’t looking out for other people,” Vernon chides the audience, “then you need to get your head out of your ass”.

Not to leave an impression of Vernon as didactic: tonight he is bullish, but not a bully—hooting, hollering, reworking melodies, making jokes. Still: it’s fitting that the show’s climax, a breathless version of ‘Skinny Love’, should be briefly delayed by Vernon’s forgetting to unmute his guitar, leaving a crew member to scurry on and rectify the situation before it becomes a problem. “Literally more important that me,” he quips, gesturing back at his aide. Unlikely, but we see his point.