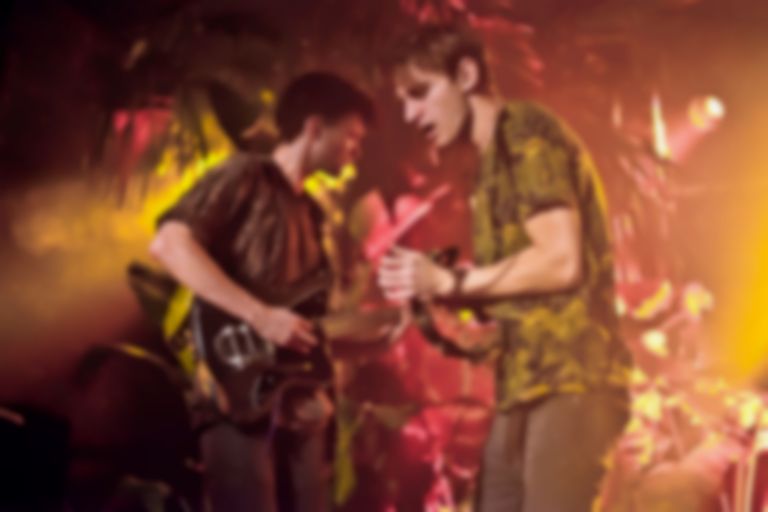 ZABA, Glass Animals' debut LP, is one of the year's finest and most original releases, and with zesty sets at festivals nationwide winding down, they're setting sail on a headline trek once more.

The landlubbers aboard the Bristol's newly-refurbed seafaring gig venue, the Thekla, are squealing with glee and eagerly anticipating Glass Animals' return to the city. The Oxford quartet have been on a rapid rise this year, and its evident with the throngs of ticket-holders filling out the decks. With the sheer volume of bodies here tonight, it's easy to image the band packing out the bigger venues they've selected for their journey in March 2015, including London's Shepherd's Bush Empire.

In the seconds before Glass Animals' imminent arrival, the stage becomes dappled in a plethora of purples, reds, golds, greens and pinks; it's enrobed in smog to the point you can barely see the back wall. The four-piece summon their unique brand of jungle fever, with rainforest noises ricocheting through the smoke and a dense, humid air filling the room (though admittedly that's the combination of sweat and bad ventilation, not a tropical climate).

The low hum off bass growls into earshot.

“Psylla” dawns – an EP track; not one of their more well known cuts – with hypnotic ritual percussion á la the “Kali-ma” scene in Temple Of Doom and the familiar falsetto of crooneur Dave Bayley. It's a slow-burning opener, but provides a fabulous platform to witness the swamp-rock/sludgey-blues riffing that litters the track.

“Gooey” and “Hazey” are home-run numbers, the former especially eliciting a grand response, with people actually singing along – given the eccentricity and bizarre semi-whisper-cum-sultry-snarl delviery, it's a pretty impressive testament to the band's rising popularity. When those peanut butter vibes beckon, can anyone resist?

As they slip between songs, Bayley, adorned with a big Cheshire Cat-grin, is effusively polite, thanking the crowd at every turn (and lamenting the absence of Big Jeff). The band seem genuinely humbled by the turnout, and almost giddy in disbelief. However, they're not meek; they gyrate and throb and crank out weird moves that only fit to the sounds of ZABA: double-swan hand jabs, lyric miming (things like halos, knives and noses) and marionette-master finger waves.

“Black Mambo” is another achey-breaky whipcrack lilt-type belter. “Cocoa Hooves” channels voodoo charm and a jigger of malice. “Flip” is an kangaroo court's execution anthem; “Walla Walla”'s Eastern twangs employ a dab of the Orient; the gory “Exxus” squirms into extended jams. Every facet of their show is a consummate joy to behold, and despite it's obvious meticulously-planned and taut nature, feels utterly effortless.

Glass Animals end on a double-tap encore of their highly-stylised cover of Kanye West's “Love Lockdown” and a supreme rendition of exotic-pop hit “Pools”, which ignites a kind of Where The Wild Things Are firedance amongst the audience. It's a rocket-powered ramp-up of energy and pace, and acts as a harbinger of their growing 2015 calendar; they may have released ZABA before the summer even kicked off, but Glass Animals' momentum is still firmly on the upswing.