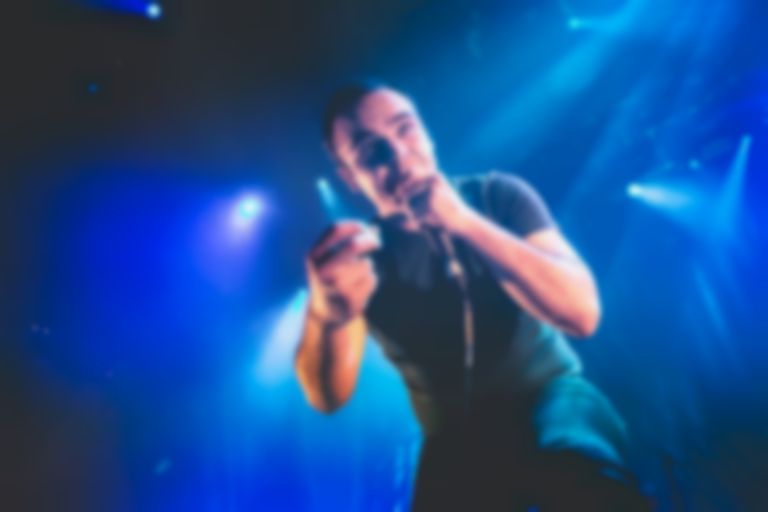 In structure and style, the songs of Future Islands follow and rarely deviate from a specific pattern.

Fast paced, motorik drum beats pulse beneath glittery synths that are dreamy enough to induce a lull, before another more piercing layer awakes you and pulls you back in to the present.

It’s a formula that’s effective and has firmly established an identity for the band from North Carolina, who are now almost a decade old. Their fifth studio-album The Far Field, released in spring of this year, was received overall favourably, and highlighted the sustained appeal of their modus operandi.

But it is the enigma of singer Samuel T. Herring and his presence on stage that continues to reinvigorate interest in this special brand of synth-pop.

Once again tonight at the first of three full-capacity shows at Brixton Academy, Herring proves that he is in every sense the perfect frontman, from the diversity of his vocal box as he glides from deep, death-metal growls to high, soulful howls, to the way he physically holds the stage as slides from stage left to right in the blink of an eye.

But significantly, all of these disco jerks and meaty slaps to the face are not just showy gimmicks. Herring wears the sentiment behind each song with a kind of Brechtian grace, pumping his chest with force in the likes of “Time On Her Side” as he sings “I can’t beat it / Oh! The sirens sing me home / Just can’t release it / I didn’t have the strength to go”. In “Cave”, his hands pinch together and move almost religiously, as if holding the sacrament, as he questions “Is this a desperate wish for dying? / Or a wish that dying cease? The fear that keeps me going and going and going / Is the same fear that brings me to my knees”.

Of course, it’s the beat which brings him to his knees too, defying his stocky build and bouncing like a Cossack dancer or dropping seductively with unbelievable ease throughout the likes of “Spirit” and “Doves” from their 2014 landmark record Singles; “He’s the most unlikely sex symbol of our time” someone nearby admits.

Herring can be perplexing, but his presence on stage has always been an important part of Future Islands’ appeal, and has been spoken about since their beginnings (albeit significantly more after that Letterman performance). That by now his presence is still mused upon goes to prove that the jerks and growls are not gimmicks but a theatrical performance that connects his audience to the message of his art meaningfully.