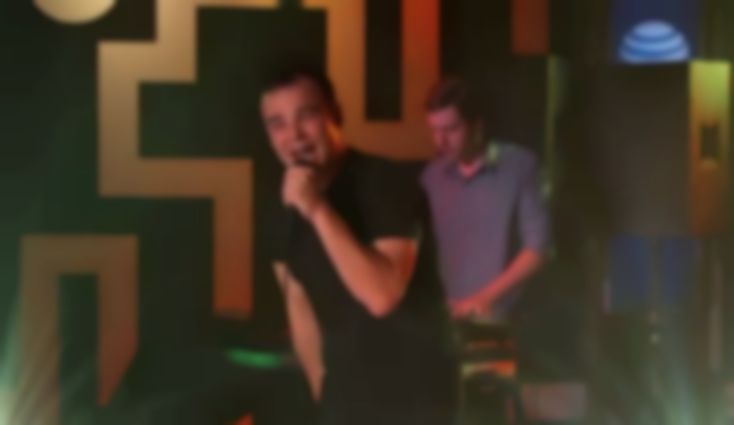 Bolstered by the recent viral spread of a fine performance on David Letterman, Future Islands are a band whose moment seems to have well and truly arrived. That’s not that they have just found popularity, having come together in North Carolina in 2006, but as the famed dance moves of lead singer Samuel T. Herring catch on, it is evident that interest in the music is also peaking.

Making a switch to 4AD for their newly released Singles album has also done the band no harm either, as for their biggest UK headline show to date, Camden’s Electric Ballroom was rammed with fans just waiting to dance.

And dance they did. It’s an unsurprising fact that Future Islands’ mix of bass-heavy synth pop elicits, nay demands, body jerking reactions with its disco elements and weighty beats, but the band’s appeal reaches far beyond all that. With all of the dancibility factor, it’s Herring who really knows how to engage an audience with his captivating showmanship. From the opening of “Back In The Tall Grass’ it’s power vocals and performance all the way as he jerked, slithered and slid through the band’s back catalogue.

It was difficult to know if this kind overly enthusiastic entertainment would work this side of the pond, where things tend to be less showy, but Future Islands conquered the old British stoicism within minutes. At moments, the Americanism shone through and the whole thing felt slightly like being in a self-help group, with Herring offering deep and meaningfuls in amongst the songs. When he got down to singing though, he encompassed intimate, despite the large space, with personal interactions with those squished on the front barrier.

As a frontman he ensures all eyes are on him with dynamic gestures. His relationship to his lyrics and the way he brings them to life is extraordinary. During “Tin Man”, it looked as if it was all getting too much as he pulled on his forehead as if trying to shift a memory physically from his head.

A cry of “Who is ready to get dirty?” gave way to a crotch grab during “Doves” before his trademark shoulder wiggle sealed the sexual element to his moves. Without going on about it, his dancing was incredible to watch as his smooth shapes are completely at odds with his appearance. Broad and dressed entirely in black, he looks more like Johnny Cash than Prince, but musically this is not the case.

At points his lack of physical restraint extended to his voice as well as his limbs, as he retched and screamed with intensity. Despite the screamo connotations and occasional rock claw from the audience, it was more theatrical than terrifying.

After a lengthy encore, “Little Dreamer” brought the evening to at thoughtful and considered close. Written for a girl Herring had once loved and lost, the emotion of it was palpable and as such was the perfect ending to a night of dramatics.

Let’s hope that the amount energy Future Islands exert is enough for them to last them the distance, but with endless charm in Herring, it looks as if the momentum will just keep on building.